Analysis: The numbers that show Gameloft is making more of the App Store opportunity than EA Mobile 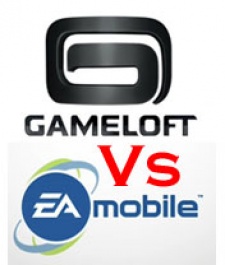 January 10th, 2011 - 08:31am
By Jon Jordan, Contributing Editor
When it comes to mobile publishing arch rivals, there's only one bout in town - EA Mobile versus Gameloft.

In terms of financial strength, both are roughly equal.

EA Mobile's sales were $212 million for FY10, while Gameloft did around $142 million for the nine months of the year it's announced to-date.

However, analysing their performance on Apple's App Store, which is the biggest and most transparent smartphone marketplace, demonstrates different approaches to the business.

Perhaps the most surprising headline is that Gameloft has released almost twice as many games as EA Mobile; 198 to 104. It was also much quicker to the App Store opportunity, releasing 22 games in 2008 to EA's 6.

Yet when we consider the number of paid games released, the gap narrows slightly. Gameloft has released 124 paid games to EA's 78.

This is important to note because Gameloft releases a higher percentage of free games. Around a third of all Gameloft's releases are freebies compared to a quarter for EA. 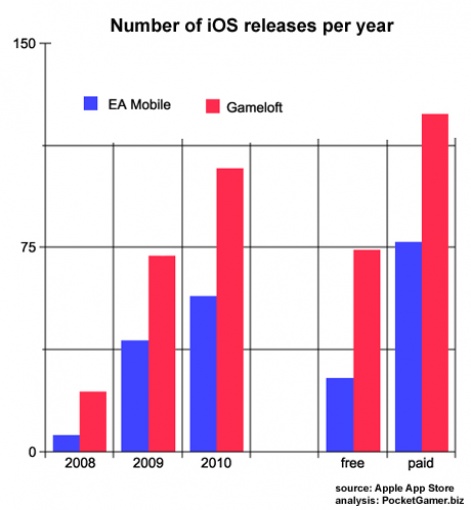 This underlines Gameloft's general App Store strategy, which is to release individual games for iPhone and iPad, usually releasing a free version for each.

Neither company likes the idea of universal apps, preferring the ability to price their iPad games higher than their iPhone releases.

Digging deeper into the data, we can break down the releases from each publisher into what I call individual titles - ie grouping together series such as FIFA, Let's Golf, Scrabble etc each as a single title - we can see this more clearly.

Gameloft has 72 'titles', compared to EA's 55, or in reversed percentage terms, just under two thirds of Gameloft's releases consist of versions - whether free, iPhone/iPad or sequels - of core 'titles'. For EA, this figure is just under half.

This is one of the most important statistics in explaining how the two company's App Store philosophy is different.

Once Gameloft decides to release an iOS game, it works all the angles, typically releasing free and paid versions for iPhone and iPad, and releasing sequels too.

EA, on the other hand, doesn't work its games so hard. Most obviously, it doesn't release as many free versions, and it's also released fewer sequels.

Gameloft does release licensed content of course. Four percent of its games are based on sister company Ubisoft's PC and console games and a further six percent on other external licences, mainly films.

However, the total comparison is 32 percent of EA's iOS games are licensed compared to just 10 percent of Gameloft.

The other key difference between the two companies concerns pricing.

When it comes to a crude breakdown of average game price, the two are broadly similar. The average price of a Gameloft game at launch is $4.40, while EA's average is a touch higher at $4.66.

Yet the price distribution of their games over time varies considerably. 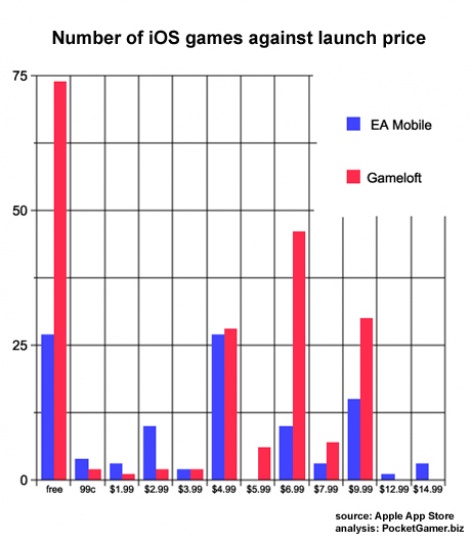 Where you can see the big differences is how prices change over time.

As you'd expect, prices fall. The most popular price point for EA games longterm is 99c - something particularly demonstrated by its Christmas sale, which saw a large number of its games slashed to that level.

Indeed, only 7 of EA's paid releases haven't been 99c at some point, and only two of its iPhone games - the Rock Band franchise. 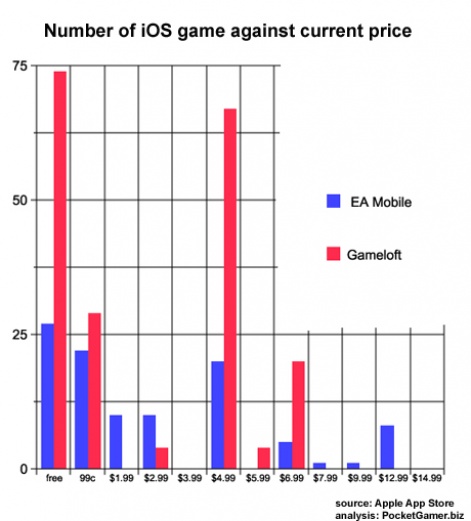 Gameloft manages to maintain the majority of its titles at £4.99 however. In fact, it has a much more transparent pricing strategy, with the longterm options being 99c, $4.99 or $6.99.

In some ways, this is positive, as licences such as Madden and Need for Speed mean it can maintain much higher prices (although both those games have been discounted to 99c at certain times).

But it's more confusing for consumers, who can more easily understand Gameloft's cheap, average and premium price levels - 99c, $4,99 and $6.99 respectively.

In conclusion then, my gut feeling from this analysis is Gameloft is making better use of the App Store opportunity than EA.

It's releasing more games, it's relying less on external licences, creating more of its own brands and working them harder. Its pricing strategy seems more coherent too.

EA's approach is far more traditional mobile, based on licences and games as a singular experience. Gameloft - while not perfect - has a more fluid and service-based approach.

In this context, a final point to make is Gameloft develops most of its game inhouse, which enables it to be in control of sequels, free versions and updates. In contrast, many of EA games are developed by thirdparty studios; something the publisher seldom highlights.

Yet, while all this analysis is fascinating, the thing that really matters in the two companies' rivalry is which is making the most money from the App Store?

Neither break out specific figures, although Gameloft has on occasions commented on the sales or revenue increase it's gained from Apple devices.

Certainly, it will be fascinating to see how the bumper Christmas season will impact both companies' earning announcements, due at the end of January/early February.

For more analysis like this, get ready for PocketGamer.biz's 2011 Mobile Gaming Trends report, which is due out soon.

Our 2010 report is still available too.