The Pocket Gamer Awards 2011: The Winners

And Game of the Year goes to... 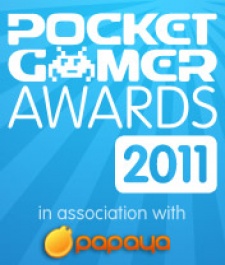 March 1st, 2011 - 05:10pm
By Richard Brown
In what's commonly known as GDC's take on The Oscars - in these quarters, at least - sister site Pocket Gamer has just re-re-re-revealed the winners for 2011 in the portable gaming industry and begun distributing the statuettes in earnest.

The Pocket Gamer Awards academy invited members of the assembled press - read: Pocket Gamer staff - to vote on a range of categories, including the ('one they all wanted') Game of the Year.

In the iPhone/iPod touch section, Chillingo and Firemint were the main prizewinners, scooping two trinkets each for Cut the Rope and Real Racing 2 respectively.
Cut the Rope collected the Best Casual/Puzzle Game and Most Innovative Game trophies, besting Fruit Ninja in the former and Silverfish in the latter.

Meanwhile, Real Racing 2 swept past Let's Golf! 2 in the Best Sports/Driving Game pursuit and also managed to pick up the top accolade - iPhone & iPod touch Game of the Year.

2D Boy's award-winning PC phenomenon World of Goo repeated the trick on iPad, beating off the challenge of Osmos - whose developer Hemisphere Games itself amassed a pair of titles - and Zen Bound 2 to earn the distinctions Best Casual/Puzzle Game and Game of the Year.

Over in the mobile realm, Microsoft Game Studios put its parent company's recent Windows Phone 7 update woes behind it to celebrate a trio of successes for ilomilo in the Best Casual/Puzzle Game, Most Innovative Game, and WP7 Game of the Year classifications.

Polarbit (Reckless Racing) and Glu Mobile (Glyder: Adventure Worlds and Build-a-Lot 2: Town of the Year) also had cause for celebration, picking up a brace of accolades each despite stiff competition from the likes of Best Publisher (Gameloft) and Best Developer (Hexage).

With interest in both the DS and PSP cranked up a notch of late thanks to the Japanese launch of the 3DS and NGP's upcoming debut, the handheld finalists garnered much attention.

Whilst God of War: Ghost of Sparta successfully fended off the other nine contenders on Sony's platform, including Metal Gear Solid: Peace Walker, to win Game of the Year, Nintendo's Super Scribblenauts wrote - or rather drew - its name into folklore by triumphing in the DS section.

Best Game of the Year

And finally, the big one; the Best Film equivalent, the blue riband - the Pocket Gamer Awards 2011: Game of the Year.

So, without further ado, we present to you the overall champion of the portable gaming world...Real Racing 2.

Congratulations to Firemint and all the nominees. All that's left to say is thank you for reading and tune in same time, same channel next year for the results from the 2012 ceremony.

Most Innovative GameCut the Rope (Chillingo)

Game of the YearReal Racing 2 (Firemint)

Best PublisherGameloft
Java Game of the YearBuild-a-Lot 2: Town of the Year (Glu Mobile)

Game of the YearWorld of Goo (2D Boy)

PSP Game of the YearGod of War: Ghost of Sparta (Sony Computer Entertainment)

DS Game of the YearSuper Scribblenauts (Warner Bros)
THE POCKET GAMER AWARDS 2011: GAME OF THE YEARReal Racing 2 (Firemint)
Look out for the Readers' Choice Awards - open to developers and publishers, of course - later in the week over on the Pocket Gamer site.