Solid launch is win-win for the Android platform

March 22nd, 2011 - 07:11pm
By Jon Jordan, Contributing Editor
As I've argued previously, mobile hardware is becoming commodified, leaving hardware companies fighting over developer support and or user interface customisation in the drive to differentiate their products and maintain their prices.

Still, when it comes to the fundamental three-way battle between platforms - iOS versus Windows Phone versus Android - there's another crucial element, sales channels.

The bad news for iOS and Window Phone fans is that as closed platforms, only official stores like the Apple App Store/iTunes and Windows Marketplace will ever be available. If you don't like them for any reason, tough.

It's a very different story for Android users as Google has finally started to get serious about its default Android Market, while third party channels such as GetJar are already doing huge volumes of free content - over 1.5 billion downloads to-date.

Amazon's just launched Appstore for Android is the most significant event in the digital distribution of apps however.

With over 130 million active customers already connected to its online store, it debuts with the potential go head-to-head with iTunes in terms of consumer reach.

This is particularly the case as the browser version of the Appstore (amazon.com/appstore) is fully integrated within the standard Amazon online store. It treats the purchase of Android games and apps just like any other category of goods that Amazon sells. You use the same account and billing details, and the same rate, share, review and recommendation processes. 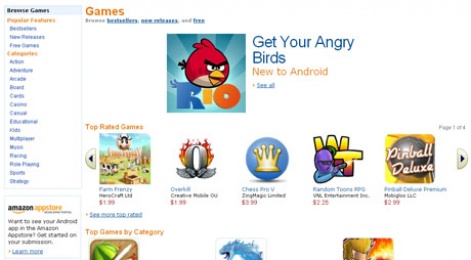 In terms of set up, you use the browser version of the store to search through the available apps, looking through lists such as Bestsellers, Top Free, Top Paid, Top Rated, Movers & Shakers, Hot New Releases and Featured Developers, either buying items directly - you have to be using Amazon's 1-Click payment method - or adding them to your wish list for later.

Another key advantage offered by Amazon over other stores, is its Deals listing.

This works as each developer agrees to provide Android games and apps to Amazon on the basis that the retailer can change their price if it wants to. Developers get 70 percent of sales or a minimum of 20 percent of the list price if a game is heavily discounted, and it's this flexibility that enables Amazon to tweak its promotions to maximise sales.

At launch, there aren't any great deals - the exclusive free giveaway of Angry Birds Rio aside. Gamevil's Baseball Superstars 2011 is $3.99, down from $4.99, but the other discounted games are generic card and board games such as Chess, Backgammon or Mahjong. 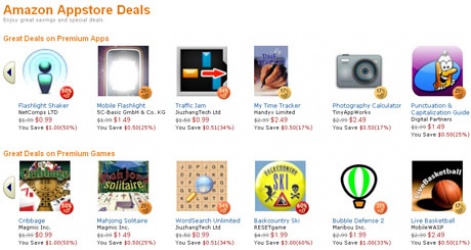 This will change over time as Amazon get to understand how the Appstore's audience works and wants, while the daily Paid App for Free Every Day feature will drive the store's general uptake.

When it comes to getting Android apps or games onto your Android device (smartphone or tablet)  - currently only available for 'customers located in the US' , you first have to have downloaded the Appstore for Android app, which is available from the Amazon website (link here).

Incidentally, using this method - via email or mobile number - to distribute the Appstore app means your Android device is automatically registered with your Amazon account. This is useful as this information is used within the web store so you can automatically see which apps and games are compatible with your device.

(As an aside, this is one area in which Google's Android Market remains ahead of Amazon's Appstore as you can directly buy and download apps from the Android Market to your device over the air without touching it.)

Part of the process

There are also a couple of caveats concerning the process of installing the Appstore app.

It only supports devices running Android 1.6 or better, although that's the vast majority of the userbase. You'll also have to work out how to download and install content from "unknown sources", which may be offputting or too complex for some people. More temporary, at the moment, AT&T phones and tablets don't support the Appstore for Android, although Amazon says AT&T is working to sort this out.

These issues aside, the Amazon Appstore for Android offers a good user experience, although it's not as complete as available via browser. Neither is it yet integrated within the main Amazon store.

Still, you can, of course, purchase apps direct from the app itself, again once you've set up the 1-Click payment method for your mobile device on your Amazon account. Alternatively, apps and games you've already purchased via web are stored in a list on the My Apps page for you to directly download.

When it comes to navigating through the app itself (I was using it on the Motorola Xoom), the most eye catching feature is the Paid App for Free Every Day, which is the main banner header, and displays a neat countdown clock letting you know how long the app is available for free.

In general, the design of app's user interface is uncluttered, with a search field in the top right of the screen, and main categories such as Top, New, Games, Entertainment, Lifestyle etc running underneath the header graphic.

Below these, the default display shows the Top Paid, Top Free and Top Rated apps from 1 to 100. Other options include an alphabetical listing of all categories, Recommended apps (not yet working on device it seems), and your list of apps to downloaded later, a list of installed apps, and one for your apps with available updates.

More detailed descriptions add a longer text explanation about the app, a developer history, version number, original release date, file size and screenshots. It's all fairly standard information, but nicely displayed using tabs on the Appstore for Android app itself. It's better designed on the app than via web, which follows the default presentation of the Amazon webstore, and is more messy.

In both situations though, what's likely to be useful information are the recommendation options - 'Customers Who Bought This Item Also Bought' option, or 'Customers Who Viewed Ultimately Bought'.

In conclusion, Amazon's Appstore for Android is exactly what Android developers and users wanted.

It doesn't yet replace Google's Android Marketplace, which is superior in certain aspects such as over the air distribution and will be further improved soon, let alone the easy of getting free apps from third party stores such as GetJar. But the Appstore for Android is much better than both in terms of providing a social framework for app discovery, while its daily free and cheap game and app promotions will drive sales. Of course, anyone who's a regular Amazon user will love it straight away.

Hence, it's a win-win situation for anyone involved in the Android ecosystem. It will be fascinating to see what changes it triggers at Apple and Microsoft/Nokia.