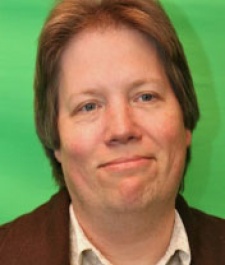 July 26th, 2011 - 10:01am
By Guest Author
Paul OConnor is brand director at Appy Entertainment, which develops games for iOS.

Since its introduction in November 2010, Trucks & Skulls has been Appy Entertainments fastest-selling game.

With the iPad and iPhone versions of the game spotlighted by Apple as its Games of the Week over the US Thanksgiving holiday, it benefitted from extraordinary exposure and made a strong run up the charts, with the iPad version reaching #2 Paid App status in the United States.

Building on our baseTrucks & Skulls has built a loyal and hardcore following that appreciates our signature take on the physics-launching genre, along with distinctive features like the full-featured level editor in the iPad version, and the free levels distributed to our players every Thursday.

From direct feedback and App Store reviews of Trucks & Skulls, we knew that when people try the game, they find they get a lot more than they bargained for, which led us to believe that direct recommendations from our player base were bound to help the game grow.

For the impact of recommendations to be felt, the next step was to grow the Trucks & Skulls player base. After that heady run up the charts in 2010, the game generated consistent daily earnings for Appy Entertainment. Nonetheless, with the overall market continuing to grow, we were convinced there was plenty of room for Trucks to increase revenue.

We needed more players, and we needed to do a better job of monetising the players we had.

Two-pronged approachFirst, we elected to add freemium-style currency and in-app purchases to Trucks & Skulls, to better monetise our existing players. Second, we decided to offer the game for free for a limited time to grow our install base and goose player-to-player recommendations.

Adding a freemium store to a strong-selling premium game was a challenge, a bit like that old commercial about building a plane in flight.

Our customers already expect a steady stream of free updates in Trucks  we released more than 100 free levels in the games first six months. The update program is a promise to our loyal players, so we decided that our big freemium update for Trucks would also include 15 new levels, and that we would commit to supporting the app with more free levels on a continuing basis.

We were also careful to ensure that completing the game did not require paid content. Trucks & Skulls remained Trucks & Skulls, still offering six-plus hours of play and hundreds of levels for 99c - everything offered in our freemium store was built on top of the base game, and nothing was taken away.

Building a paywall that doesnt suckWe decided that Trucks & Skulls would have a soft paywall. Trucks & Skulls engineer Quinn Dunki characterised the experience of playing many freemium games as getting groped for her wallet, and we didnt want to do that to our players.

Rather than bolting our store onto the game as a separate system, or using the store as a gatekeeper preventing players from experiencing everything Trucks has to offer, we wove gold rewards into our existing reward system, deepening play experience and encouraging players to replay levels.

An essential element of the game allows players to earn gold just by playing - completing levels, setting high scores, and winning gold challenges by bettering their scores on past levels.

Our approach was that players could get rich slow by earning gold during play, or get rich fast by making an in-app purchase. Were still finding our way in to 'fix' the way freemium games are designed, but were encouraged by early reaction to a system that pays players to play, rather than the other way around.

Ultimately we hope to make games where players pay us because they want to, rather than because they feel they have to.

Also critical to introduction of our freemium system were loyalty rewards for existing players. Players upgrading to the rechristened Trucks & Skulls Nitro received gold for their past play - in many cases this was hundreds or thousands of coins, with some of our top players finding they were awarded enough legacy gold to immediately purchase just about everything on offer in the store!

Even with free levels and free gold accompanying this update, we still held our breath when we pushed the update live, fearing that our player base might object to a freemium store being added to their favorite game.

It turns out player feedback was very positive - 5-star iTunes App Store reviews continued to appear - and the numbers indicated that our pivot from premium to freemium was an unqualified success.

Revenue responseThe AppFigures chart below shows total revenue for Trucks & Skulls for a bit more than the last month. The first part of the chart shows the steady revenue from Trucks as a traditional 99c premium app. With the introduction of the freemium store in Trucks & Skulls Nitro, our daily revenue jumped 150 percent, and held through the latter half of June with the usual peaks and valleys of weekday and weekend sales. 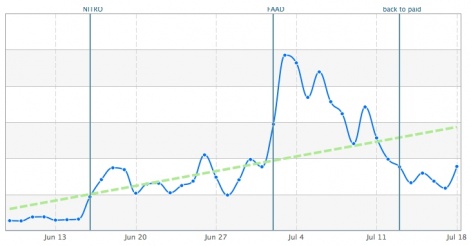 We viewed this initial premium/freemium period for Trucks & Skulls as a shakedown cruise. We evaluated player feedback and rapidly patched some release bugs, and kept a close eye on player purchase behavior to evaluate the success of our in-app purchase options.

Value of in-app purchasesUnit sales of gold were as what we expected, sorting themselves by price. Our introductory $1.99 bundle of 150 gold outsold others by a considerable margin, with the $4.99/400 gold option coming second, and the $14.99/1350 gold bundle placing last. 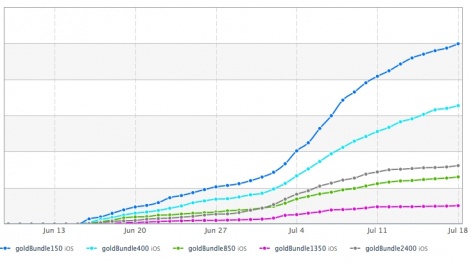 Gold revenues tell a different story. Here we see that the $24.99/2400 gold bundle has generated vastly more revenue for Appy than the other options.

The other options have been solid earners, but with the $14.99/1350 gold bundle place last on both charts, we will likely have to examine that pricing tier going forward. 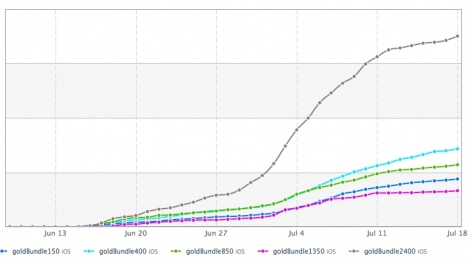 With players enthused for Trucks & Skulls Nitro, and with our store pretty much dialed-in, we were ready to enact the second stage of our strategy - changing Trucks & Skulls over to being a free app.

We had previously experienced great success partnering with Free App A Day to promote FaceFighter, and with an opening in its calendar for the July 4 holiday weekend, it was the perfect opportunity to promote a free Trucks & Skulls to the wider audience we desired.

As expected, downloads surged when Trucks dropped from 99c to free  more than 5,000 percent as the impact of the Free App A Day promotion was felt. Revenue also substantially increased, peaking on Sunday July 3, when the game was downloaded more than 100,000 times. Revenue declined during the week we remained free, but remained greater than the revenue experienced during Trucks & Skulls Nitro's period as a 99c app.

Going back To paid

On July 13 we returned Trucks to 99c. Our data is limited since that time, but it appears the game has returned to the revenue levels experienced prior to our free period, perhaps experiencing a slight decline.

It is encouraging that the very last data point on our graph shows a sharp revenue uptick on a Monday, as it is practically unheard of for Trucks revenue to increase coming out of a weekend. We hope this is an indication of a follow-on effect from past players electing to make in-app purchases after they have played the game for a while and deciding that Trucks is fun enough to be worth a few extra dollars - this would be an important vindication of our soft paywall strategy. Time will tell.

It is still too early to determine if Trucks & Skulls will remain a premium+freemium title, or if we will make it free on a permanent basis, but it is certain that straight premium pricing is the inferior model.

Our freemium store has allowed us to better serve and monetise our players and has liberated our daily revenue from a strict correspondence with download volume, allowing for pleasant surprises in our daily sales reports, such as that Monday that saw revenue increase, even as downloads of the app dropped off.

Lets do it againEncouraged by the success of pivoting Trucks & Skulls from premium to freemium, we are reintroducing our most popular franchise - FaceFighter - using similar store mechanics.
FaceFighter Ultimate is in approval with Apple right now, and will replace FaceFighter Lite in our lineup when it is (hopefully!) released near the end of July.

Featuring the same soft paywall and pay-to-play mechanics employed in Trucks & Skulls, we hope that this new version of FaceFighter will be more fun for our players, and better monetise the base of an app that has already been downloaded over 4 million times.

Our next original title - an as-yet unannounced role-playing game set for release near the end of this year - will employ our freemium play principles from the ground-up, and we look forward to developing this underlying system of monetisation and reward with our future games in 2012 and beyond.

Key takeaways Respect your existing customer base - reward them for past play, and dont reduce the current functionality of your app.

 Integrate in-app payments with the mechanics and strategy of your game. Reward skillful players with currency when they play the game well.

 Make certain that freemium additions enhance and extend the base game without being required to advance.

 Dont turn customers away with a hard paywall. Let them play as long as they like and trust the quality of your game will generate revenue on its own.

 Continue to support game your with free updates.