October 10th, 2011 - 08:27am
By Richard Brown
Seeking inspiration from public game companies' announcements of financial sales numbers every three months, Qualityindex.com has decided to publish its own quarterly figures.

But, instead of assaulting your ears and eyes with talk of operating profit, the Quality Index quarterly round-up ranks the top 20 best-reviewed iPhone games that were released during the period July 1st - September 30th, 2011.

As for the reviews themselves, Qualityindex.com boasts over 100,000 of them from the world's leading online sources, including 148Apps, Slide to Play, Pocket Gamer, and AppSpy.

iBlast from the past

The highest-rated iPhone game this quarter was Godzilab's trajectory-based puzzle title iBlast Moki 2, a spectacular sequel that made good on the promise of more bombs, more anarchy, and more crazy contraptions.

With 90 colourful and charismatic levels to explore and a vast assortment of manipulable items to employ, the French developer's latest puzzling adventure exploded onto the App Store scene in mid-August.
iBlast Moki 2's phenomenal 9.3 Qi rating was amassed from six expert reviews, including a trio of perfect 10s from Tapscape, AppSpy, and TouchGen.

And sticking to the theme of wanton mass destruction, Chillingo's twin-stick shooter Infinity Field eviscerated most, if not quite all, of the competition in this third fiscal quarter.

As always in these perilous space-age scenarios, you're entrusted with the galaxy's most piddling craft and invited - nay, dared - to evade wave after wave of multicoloured ordnance, and occasionally fight back.

It's not as if Aussie studio Halfbrick was ever likely to be considered a one-hit wonder after the uniquivocal triumph that was Fruit Ninja: I mean, the talented team has already tasted further critical success on Qi with its Barry Steakfries-starring follow-up Age of Zombies.

Given the startlingly positive reception accorded to Halfbrick's one-finger arcade game Jetpack Joyride from a wide spectrum of iPhone media outlets, though, we may soon be struggling to recall why such a fuss was made about slashing strawberries in the first place.

See you back here in January, Pocket Gamer pickers, when we're sure to have an answer to that melon-mashing poser. 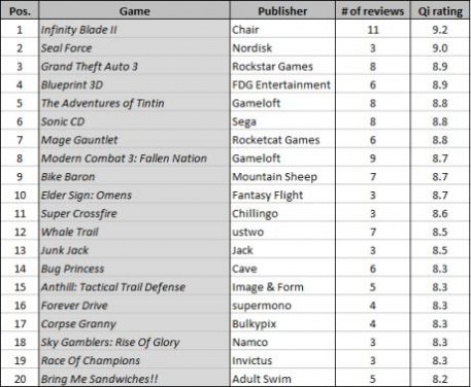 To qualify for a Quality Index rating, a game must have received three or more reviews from the 60+ sites that feed into Qi's database.Methodology #2

Should the number of reviews also be identical, the Quality Index rating comes back into play, for while we only display the average score to one decimal place, the list is generated to further significant figures.

You can always keep up to date with the hottest-reviewed iPhone games at the Quality Index.