There are more options today than ever before 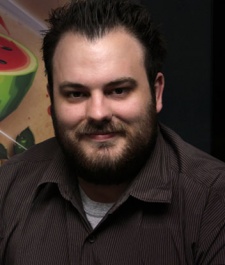 It's right up there with Angry Birds as one of the most recognised games on the App Store.

And it's since repeated that success with recent release Jetpack Joyride, an 99c iOS title that's hit the #1 top grossing game spot in 18 countries.

Don't think of Halfbrick as an iOS studio, though. Founded in 2001, it's developed for a wide number of platforms.

We spoke with chief marketing officer, Phil Larsen to find out about Halfbrick's accomplishments, future plans, and the nature of iOS gamers.

Pocket Gamer: How has the success of Fruit Ninja raised Halfbrick's bar of accomplishment, and how happy are you with Jetpack Joyride's performance?

Phil Larsen: To give a quick update, the downloads for Jetpack Joyride are now over 600,000.

We are very happy with that for a number of reasons. It is another successful IP for Halfbrick, and a very profitable game. What's more, it tells us something about the market, about monetisation, and about the value of a quality game.

We are aware that a game like Fruit Ninja is one of the biggest of all time.

To replicate that isn't an easy task, so we make every project work for us in the best possible way to give us even more information about who we are and what we can do better.

For example, Jetpack is our first game with IAP, and we've already learned so much about how that works and how to improve future developments.

To top it off, Jetpack was designed from the ground up as a living, breathing beast to be adapted, changed, updated and improved. The core gameplay and polished content is so strong that we're only able to move up from here.

It doesn't have the runaway universal accessibility that Fruit Ninja had, but everything is still working for us and going guns blazing.

How much does iOS success depend on breaking into the top 25 chart?

The top 25, and even the top 5, is very important. The reality is, that's where most eyes go and that's where you can get massive exposure.

However, of course you won't be able to get there by sitting around - it's a lot of groundwork to build up each element of your release to give it the maximum possible potential for chart success. A great game, awesome marketing, pinpoint timing, ongoing support - there's so many factors at play, and none can be ignored.

Of course, now with the shifting market those raw sales numbers aren't the only piece of the pie. Many games are monetised extremely well by tapping into a key player base and providing the content to drive high value IAP. Many of these games aren't high in the charts at all.

Freemium has a lot more legs now, and that has only given developers more options. Paid charts are still on the rise overall and other revenue paths have surfaced - there's more options today than ever before.

Jetpack Joyride is loaded with stats and achievements - bragging points more commonly associated with core gamers - so why did you decide to include them?

There's a difference. Core gamers might really be working to improve their kill/death ratio in Call of Duty for serious bragging rights. For us, statistics are fun! It's awesome to read about how far you have flown in total, or how many coins you collected after being blasted by a missile.

We will always have a good range of stats for competitive purposes, but we'll throw anything in there that will add to the fun factor of the game. Just like the fruit facts in Fruit Ninja - wildly successful!

Is their inclusion a statement that you think iOS gamers are more competitive than is commonly believed?

Not really. iOS gamers are competitive, but our data shows that for the vast majority of the time, players are just looking for a fun game for themselves with light features such as leaderboards, stats and social posting.

Multiplayer and scorekeeping is a necessary and relatively simple implementation so we are happy to do it. We like to keep a broad range of players happy.

How long until the social media functionality is ready with respect to the photos players can take in Jetpack Joyride?

We're working on it - expect that to come along within the next month.

Halfbrick has developed for PS Minis, the Xbox Live Indie and Arcade marketplaces, the Nintendo DS, and iOS. How does that affect planning in terms of which platforms you'll support?

Everything we have done, we have learnt from. For example, if Xbox implements a new digital distribution platform in future, we'll be ready to take a look at it and determine an overall feasibility plan based on how it compares to XBLIG. We're proud of our experience in many fields of digital distribution.

We also make sure that our games fit the platform they are on. A great example is Fruit Ninja Kinect. We won't shoehorn a game into a market with janky porting and a limited customer base. Fruit Ninja Kinect was a no-brainer. We wanted to get the Kinect input right, we knew that the XBLA market was itching for a great casual title, and we took advantage of that opportunity.

Our future development is based on research that we do our best to stay on top of. We keep up to date with all the new devices and make the best decisions on what we learn from sales numbers, our own creative processes and the opportunities we can enjoy by working with our key partners.

How well did Age of Zombies perform as an iOS/Xperia Play title versus a PS Minis title?

On mobile, the number of downloads was much higher due to the recognition of the Halfbrick name, the extra polish and features we added, and of course the larger number of users.

However, we still have a lot of love for our original Minis fans, who really appreciated the game and made it the number one Minis title of 2010. We had so much fun during the original development of AoZ!

You once described Raskulls as a flagship movie, and your PS Minis titles as indie flicks. Do you still have this split in your production methodology?

At the time, this comparison was correct given the clear difference in budgets and quality between say, XBLA and XBLIG. That specific example is still true to an extent, but the global market has changed so much that now the right casual game in the right place can be hailed as a blockbuster. Fruit Ninja and Angry Birds are natural examples of this.

Nowadays we ensure that every game gets the star treatment and we maximise its potential on its particular platform.

Production is based on what our goals are as a studio, and that sometimes does mean assigning more or less resources to a project, but that's also dependent on scope. Some will be bigger and some will be smaller, but in terms of us having one long-term, high budget project surrounded by smaller indie projects, that's not likely.

Of course, we still dedicate time in-house to concept new ideas make quick prototypes and run the gauntlet of experiments. Most won't make it to market but it gives us a great pool of ideas to build from. Our Halfbrick Fridays are always a lot of fun and we do that on a fairly regular basis.

How many titles is your studio comfortable developing at once?

Our goal is to keep our company culture and our core studio agile, so we work with partners to help bring our games to various markets. We don't handle all porting or development in house, and there are always updates, changes, new versions, new releases and more going on.

At any one time we could be rocking 15-20 SKU-specific tasks. However, within our core group we're usually focusing on five titles from a top level.

Are you planning on developing for the PS Vita?

It's a pretty powerful beast, and if the download functionality works as well as we hope, then we will definitely be up for taking it on board.

Mobile and social is definitely where our minds are focused on, but hopefully Vita has the potential to drive massive downloads and tap in to a global network with development freedom - that's when we'll really get excited!

Our work with The People's Republic of Animation really went down a treat with Jetpack Joyride, but that doesn't mean we've abandoned live action at all. It's great fun filming, and when the time is right we'll break out the camera and get back into it!

How is the work progressing on the Facebook version of Fruit Ninja?

Very well. We'll be ready for a full live launch by the end of October, if not earlier.

We're finalising the last few things to ensure players will have plenty to keep them coming back and ongoing updates. It's our first social game and we want to get it right to stay true to the Fruit Ninja level of quality.

You released a free version of Monster Dash that runs in Google Chrome earlier this year. Did you see an impact on sales as a result?

Not for mobile devices, but it's more than that for us. We'll create a version to help build the brand and awareness of Barry Steakfries and Halfbrick.

It's also a great chance for us to test out Chrome as a marketplace. The cross-promotion to mobile titles isn't too effective but now that we've gotten our hands dirty and a game out there, we can add more functionality to keep increasing the momentum.

Thanks to Phil for his time.