November 4th, 2011 - 01:52pm
By Jon Jordan, Contributing Editor
Looking through the supplementary information from Glu Mobile's Q3 earnings reveals some interesting thoughts in terms of how the freemium mobile publisher views the industry.

The first is the size of the available market; something Glu labels "global, developer-accessible gaming revenues".

What's significant about Glu's insight is the way it fragments the much higher estimates provided by the likes of Gartner and Juniper. Similarly, EA Mobile estimated the global mobile and handheld market in 2011 as being worth $4.1 billion.

The difference seems to be that Glu is breaking this total down into just smartphone revenue; both EA Mobile and Gameloft still make the majority of their revenue from smartphones.

The proviso "developer-accessible" also suggests it's further downgrading the available total, presumably stripping out the margin taken by platforms such as Mobage and GREE, as well as just including markets that Glu feels it can sell into.

As a freemium publisher, micro-transactions or IAP, are clearly the main driver of its revenue, while general mobile ads are limited in terms of the value that can be charged.

Obviously, both these models are driven mainly by the volume of users.

It was a massive user of Tapjoy's original incentivised download model on iOS at the start of 2011, generating around $3 million in terms of quarterly revenue. Since this was banned on iOS - limiting companies to incentivised actions, such as watching videos - the amount of money has dropped.

This can be seen in the following graph - see how the size of the green bar has dropped between Q2 to Q3. 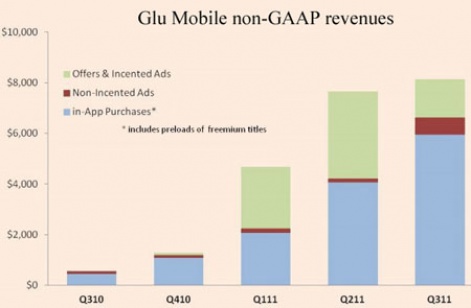 However, with Tapjoy relaunching itself on iOS (and Android) with a consumer focus, it will be fascinating to see whether this part of Glu's financial model will grow substantially, especially as Tapjoy's move to a consumer brand, if successful, would likely increase the 5 percent conversion rate.

And let's end with some good old slamming the competition.

Obviously in such a situation, companies have a tendency to highlight their business model as an industry trend, while downplaying its competitors' strengths as weaknesses.

In this case, it's highlighted its focus on 3D games, which offer more 'depth', than the typical Ville-style social mobile games. 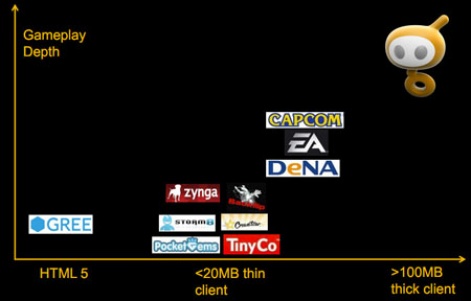 Of the companies in the slide above, around half are bigger than Glu in terms of mobile revenues, while the other half are startups that are massively profitable; something Glu won't be until 2013 at the earliest.