Playmesh's Shawn Foust on how to make location-based games work

Players not places should be the focus 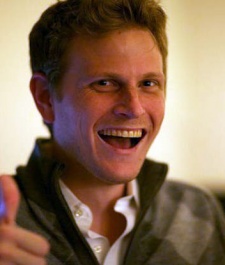 May 15th, 2012 - 02:01pm
By Guest Author
Shawn Foust is a VP at PlayMesh, handling a mix of business development, lore writing, and game design.

I often hear people say that games leveraging location-based services (LBS) are a failed experiment  that the real world has no place in games, and any effort to incorporate location is doomed to failure.

These people are wrong. Heres why.

The failure of design

I'm going to start with something counterintuitive, but bear with me: LBS games fail because they are based on locations.

LBS games typically focus entirely on a player's current location and other peoples proximity to that location.

The typical LBS game contemplates two people who don't know each other sitting at the same location and breaking out into a spontaneous eBattle for dominance of that location.

There are hundreds of thousands of locations in San Francisco alone. On Day 1, you might have 5,000 users if you're lucky. If you have any mechanic that requires two players to exist within the same location as each other, you have a serious problem.

Players will sign in, see a vast empty wilderness, and decide they hate your game.

And they should. You designed a game for 50 million users, not 5,000. You don't get to assume player concentration on Day 1. If you want to get granular with location, that's a design option you grow into.

People don't lead interesting lives. You can't design a game that assumes they do. People do not explore, they visit four locations (home, work, food, and bank). People are not traveling out of the way for your game.

If your game relies on physical presence, you've got a problem.

People arent experiencing your game world, they're experiencing four locations, one of which no one else visits (their home). Hard to make a compelling game with that, particularly if no one is seeing anyone else.

Not everyone lives in a city. Requiring proximity to diverse locations is the equivalent of telling folks residing outside of cities to go screw themselves.

I agree we're all special butterflies in San Francisco, but game designers need to be a bit more pragmatic if they're going to inject the real world into their games.

Game designers need to consider countervailing measures (modifying the range a person can interact with a location from, creating benefits for having fewer locations nearby).

It's a lot harder to succeed with game design if you eliminate two-thirds of your audience out of the gate.

Getting locations into your game isn't particularly easy either. You've got a few options available and most folks choose poorly.

Many platforms have a number of restrictions in licence agreement that prevent developers from doing the interesting stuff they want to with location data  such as creating persistent environments or commingling data to inject new mechanics. There are some less restrictive solutions, but they often need a bit more by way of accuracy.

In any case, choosing where and how you get your data is a critical decision.

The goal should be to take the data from the real world and use that as the context for the players. Make the game aware of all of the locations in a world, but dont require the player to be present in them.

The real world is more complicated than anything a designer can conjure up. The sophistication of the real world can be further enhanced by the player's personal connection to it.

Location-aware games are an opportunity to reach out to the world, draw in interesting data and create games on top of it. 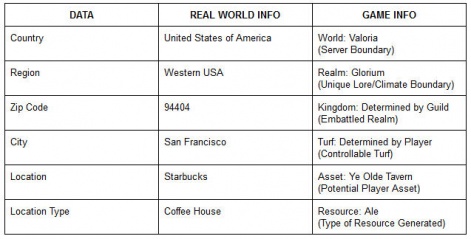 As you can see, the real world information is driving the game mechanics.

Maybe the Midwest realm has a modifier that grants bonuses to wheat production because of the presence of farms. Perhaps the West Coast gains on fish production with micro-bonuses on the Kingdom level (perhaps LA produces more entertainment).

Locations next to highways have a trade route modifier and coffee shops may produce different resources compared to teashops.

The real world is a rich repository of information, and it is entirely possible to build a game layer on top of that information. Past games haven't taken advantage of this information, preferring to focus on location name and GPS coordinates.

Who cares about the name of the location? What matters is how a location impacts the game.

Do not confine players to their immediate location. Allow them to explore the world through your game. The world is the battleground, not a cage. Free them from their four locations and let them go forth.

It is entirely permissible to unhinge a person from their present location and permit them to move freely through the broader game universe. You can certainly tie game mechanics to this process, and hopefully those mechanics increase strategic play.

Also, the concept of distance can be a meaningful piece of data. Don't shrink the world by making movement instantaneous and cost free.

A shift from SF to NYC could require investment, but it will also deliver a sense of accomplishment. The perception of travel matters, not physical movement.

Above and beyond the interest possibilities in design, LBS games have a number of built-in advantages:


For more from Shawn, head to SoMoFos, where he publishes thought-provoking articles alongside his conspirator Jamil Moledina.