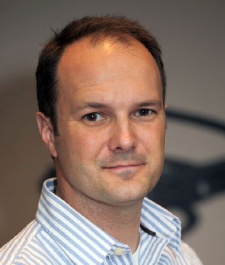 May 22nd, 2012 - 12:01pm
By Guest Author
Bryan Duke is the founder of Acceleroto, an indie game studio responsible for the likes of Doodle Hockey and Occurro. He recently released Invasion Strike, a 99c game he developed in just 30 hours.

It took me six months to get my last game Rush City out of the door as a universal app on iOS.

During some of the 'darker days' in its development, I daydreamed about doing a lightning fast, gamejam-style project.

That daydream ended up as Invasion Strike, a tilt-controlled 2.5D space shooter for iPhone. A game that took me a mere 30 hours to make.

There's a lot that developing a game in 30 hours taught  and retaught  me about game development.

1. Simple game mechanics can be brilliant

When I brainstormed Invasion Strike, I thought about the gameplay of my favourite space shooters. Take any old space shooter like Defender or Galaga  players typically hit the fire button as fast as they can.

If you make the players space ship fire automatically, youre left with just the core mechanic of steering your ship. Replace mindless button mashing with collecting desirable power-ups and the fun level goes way up.

2. Time spent scoping and designing a project pays off big

For Invasion Strike, I found that the focused hour I spent with a notebook and pen kept me on track throughout the project.

Brainstorm your project goals, write them down, rank them, and knock them out one at a time.

3. Get the right tools

We 'indies' pride ourselves in being able to do everything. Theres a penalty in doing that though. Time.

For Invasion Strike, I used Unity, several Unity plug-ins, and at least eight different software packages. Each of these tools cost money, but using the right software cuts immeasurable hours off development time and increases the games final polish.

If a tool cost $20, but it saves you five hour's work, the decision to buy should be a no-brainer.

Your 8th grade programming teacher was right. You should write legible code with logical flow, and comment it well.

Because I did a little bit more of this sort work for previous projects, I was able to reuse parts of my other games to quickly get exactly what I wanted out of Invasion Strike.

Youve written menus before, right? Why reinvent that every single time?

As soon as you have a playable game mechanic, put your game in front of testers.

Avoid interaction with the testers while they play. Watch and learn.

A seven-year old can probably tell you more about whats wrong with your game than you can. No matter how amazing of a tester you are, youre too close to your game.

6. Quick projects can still be favorites for players

I hate to admit it, but several people have told me they like my 30-hour game better than my six-month game.

Different games strike chords with different people. Get the gameplay right, polish it up, and your game will have fans.

If no one knows about your game, then no one will play it.

When the time is right, you have to tell your story. Spread the word. Theres no way to generate buzz about your game if you dont talk about it.

8. Give players reasons to want your games

You dont have infinite time or money to add every feature under the sun, so think about the 'soul' of your game. Add what players will love and cut what they wont.

Decide whats important for your game and make that happen.

Players will make their first impression of your game after seeing the icon or a screenshot. Once a player plays the first few minutes of your game, their impression is set in stone.

If your game isnt immediately fun and engaging, many players will quit and never go back. Even if your game has a tough learning curve, you cant wait until after an hour of gameplay to add in the fun.

10. Theres still money out there

Youre probably not going to make millions off of a game that took you 30 hours to make. However, you can make enough money for it to be worth your time.

Make sure your quick game is worthy of standing next to your other products. Charge the right price for your work, and use your new game to keep your business growing.

A 30-hour game is not only possible, but a completely attainable goal. If you can dedicate a long weekend to making a game, I highly recommend it.

Youll learn a lot about your work ethic, skills, weaknesses and potentially even make some money from it.
See if Bryan was right. Check out Invasion Strike here [iTunes link].