Together with the ubiquitous freemium model for mobile games, ads are essential to many apps' profitability. And like the games, mobile advertising is still a relatively new industry that's experiencing growing pains.

To give you a sense of the potential for mobile advertising globally, there are over 650,000 mobile apps worldwide recording over 100 billion downloads. This number will only continue to grow as people become more adapted to using the internet and apps on their phones and spending longer periods of time on their devices.

The yellow line in the chart below indicates the growing number of mobile internet users (in tens of thousands). China is expected to have 522 million smartphone users by the end of 2012. 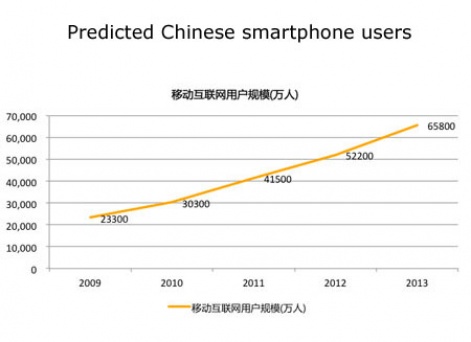 Similarly, iResearch results show that China's mobile advertising market reached 1.74 billion RMB (around $270 million) in 2010, an increase of 93 percent from the previous year.

While in 2012, the overall size of China's mobile advertising is expected to reach 5.52 billion RMB (around $870 million).

Below is a chart featuring the top 50 Android handsets on which users played our popular casual mobile game, Fishing Joy, which recorded 45 million downloads on the Android platform as of June 2012. 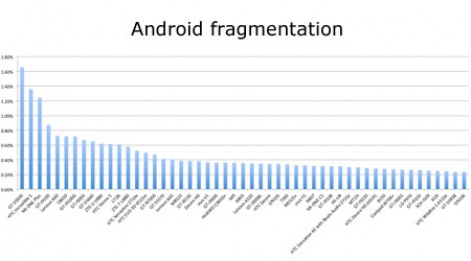 Once again, we're met with extreme fragmentation on Android devices. If a game that uses the simplest touch technology on a smart device is played on 3,878 different kinds of devices (including iOS), imagine the different processors, devices, sizes, and screen resolutions advertisers must deal with.

Ad specifications are in no way standardised as they are in traditional internet advertising. Ad images must be dynamically allocated, which requires the advertising system to be extremely flexible.

With the wide range of advertising platforms, there is an urgent need for consolidation in the industry.

In China, there are about 10 well-known advertising platforms but more than a hundred smaller ones. However, the volume of ad traffic is limited, so a vast majority of platforms are seeing little traffic. This was the same situation in 2006-2007 when the video website industry just emerged in the market.

It's also important to consider the ad's environment.

There is essentially only room for one ad within an app at a given time, and the cost to change an advertising platform is much higher than for traditional internet. For example, advertisers who want to buy ad traffic on the three different apps have to put in a number of advertising platforms at the same time. Also the cost of data collection, results analysis, and operations can potentially exceed a preset ad budget.

At this stage in the industry, mobile ad platforms are fragmented too. Over time, we'll witness some major mergers and acquisitions, leaving 2-3 major players in the space. Let's look at why how this will happen.

Given the number of sensors within smart phones, advertisers could get more creative with the type of ads they produce. However, they must first consider the technology and medium that they are working with:

High tech and large capital requirements are just not feasible for small and medium-sized advertising platforms.

In CocoaChina's experience with our own advertising network, PunchBox, the data accumulated over the past year have allowed us to create an analytics system that generates positive feedback to the ad delivery system.

At the same time, advertisers and ad networks cannot just focus on app-embedded advertising; HTML5 looms in the future. Our challenge will be to tackle the development of a convenient, cross-platform tool for serving ads on the HTML5 platform to accommodate the growth of a different type of mobile Internet traffic.

In short, the mobile internet is only in the early stages of developing its advertising business.

This exploration of the growing industry and how to maximise the value of mobile advertising has been the focus of our own research to build our ad platform business. The key will be investing in ad technology and data to become a major player in the mobile advertising space in China.

Mr Mingge Ma is the head of advertising product of CocoaChina.

Prior to CocoaChina, Ma led the development of ad delivery and targeting systems at Yoyi, a major Chinese online advertising firm. Ma also held a senior technical position at Youku, responsible for their video transcoding and advertising systems.

In addition to hosting the largest mobile developer community in China, Chukong, the parent company of CocoaChina, is also a game publisher under the brand name PunchBox Studios, with more than 60 million installs across iOS and Android.