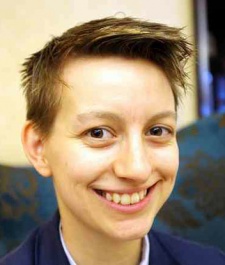 That's the key question for developers in the free-to-play world. They have to disconnect the real-world link in the minds of their audience between the concept of item value from the amount of effort it takes to create that item.

Selling extra game levels is rarely a lucrative strategy, although some developers still believe players should value them because they cost so much development time to create and increase the game experience.

By contrast, virtual hats take an insignificant amount of effort to create, and they monetise famously well.

In this world, value just isn't connected to production cost.

In this post I'm going to look at Spacetime Studios' mobile MMORPG Pocket Legends to explain how in-game object design can harness the psychological impulses that give virtual objects value in order to create high-worth IAPs.

There are lots of theories on what gives objects value; my favourite comes from sociologists looking at the world as a network - a particularly interesting approach when looking at online mobile games.

One principle of the networked value of objects is the difference between representing social status and translating it.

A representation of social status is an object that simply functions as a widely recognised sign of wealth or importance. Its value comes from everybody understanding what the sign means - a brand logo costs an insignificant amount of resources to produce, but increases the value of anything it's stitched onto.

A translation of social status is an object that stores the wealth of the wearer in the material and process required to create it. Silk, gold, and Ferraris are expensive at least in part because they cost a lot of resources and labour to produce and maintain.

The principles of representation and translation have been cleverly applied to the vanity items in Pocket Legends so that their cost is intuitively justifiable.

Weapons are cheap, expendable items, priced at 5 platinum each. They do not vary significantly in appearance but still need to be replaced for higher-level models as the character progresses.

But it's in the vanity armour and accessories where players can spend serious quantities of platinum to make their character shine. In a game world where power-ups are valued cheaply, the value of in-game items comes from the representation and translation of social status and achievement.

The Pocket Legends' shop contains a special section set aside for vanity items that possess no added value in terms of game mechanics, but look flashy.

These items are much more expensive than non-vanity items, and by far the most expensive item in the entire shop is the Omnipotent Crown of Dreams, a vanity item that costs 500 platinum.

How does the Omnipotent Crown of Dreams justify a high sale price?

The helmet itself is a very large object, covering the entire head and shoulders of the player's character. By replacing the head of the character with a golden bull's head, a total transformation of the character is represented.

Other visual design techniques make the transformation represent an increase in status. 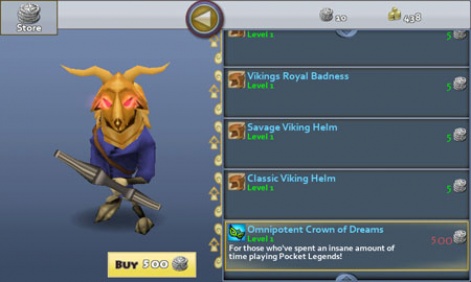 The surface appearance is shiny and metallic, giving the impression through a texture map of a very reflective surface that throws a lot of light back into the surroundings. It has glowing red eyes, which similarly give the impression of projecting light outwards.

This means that the helmet has much more visual space than the actual volume of its polygons would suggest on their own.

By giving the visual impression of increased scale, it represents an increased status of the wearer.

The Omnipotent Crown of Dreams description reads, "For those who've spent an insane amount of time playing Pocket Legends".

This explicitly references the relationship between value and time spent playing - the value of the item is a direct translation of your dedication as a player.

Of course, you don't have to spend a huge amount of time grinding to earn the 500 coins required to buy this vanity item - you could just buy virtual platinum with real money. High-value IAPs are most often a way of buying the status ordinarily gained by spending time on the game.

In-game objects can also be designed to represent value as brand loyalty.

In Pocket Legends, it is possible to buy bat wings and pet bats, and they are relatively expensive compared to other similar items.

There are a clear reference to one of Spacetime Studio's other games Dark Legends - particularly the wings, which are described as "training wheels for new vampires just learning to fly". 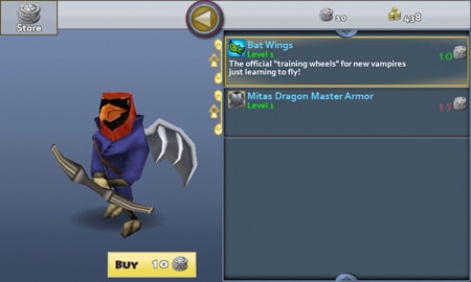 The items exist to cross-promote a portfolio. By owning these items players are showing loyalty to Spacetime Studios; demonstrating their affection for a brand; something described more widely in the subtly rebranding of the term 'whale' into 'true fan'.

The bat wings are a cheap purchase at 10 platinum, but the matching swarm of bats is more expensive. A player who has bought the wings and wants to complete the set will have to either grind to make enough platinum, or purchase it immediately.

This makes the matching set a direct translation of a player's long-term dedication not just to Pocket Legends, but to the idea of dressing up in the Dark Legends-themed outfit. The platinum cost, and the fact that the set is made of two different items, creates a translation of fandom alongside the representation of fandom in the set's design.

In Pocket Legends, vanity items take their high value from their representation and translation of the achievements and passion of players, and the transformation of their characters into a great and powerful fighter.

In any game, IAP design should aim to take the things that players value about their in-game experience, and offer a way to translate and represent that as valuable in-game items.
Zoya Street is crowdfunding a book on the history of Dreamcast games, told from within the games themselves.