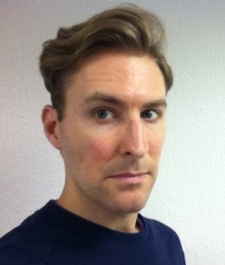 For a studio that prides itself on giving players that first adrenaline-hit of fun as soon as possible, Bar Fight Live has been a departure to say the least.

Released this summer on iOS, Bar Fight Live currently contains a simple, rough prototype with basic gameplay. The launch version didn't have any gameplay at all.

To rewind a little, Bar Fight Live (like most things at Kempt) was the brainchild of our MD Chris Kempt. At the time we were working on a game (Stunt Guy - The Getaway) starring our newly-minted Stunt Guy character and were making ourselves giddy with all the possible game scenarios we could put him in.

Simultaneously, we were wondering how the hell it would make any money. Up to this point our successes had been with free games. In fact, some of our free games were used to persuade people to buy stuff. This got us thinking...

We decided that The Getaway would launch as a free app, used to promote a second game that would have the potential to earn us money through IAP. By some inspired leap of the imagination Chris saw the excitement it would instil in gamers if they were the ones who got to choose what that game might be.

Before long we were heading down the road of the App Store's first crowdsourced, crowdfunded live development  Bar Fight Live.

If you build it, he will come

In a nutshell, the concept behind Bar Fight Live is that we ask users what they want; they tell us; we build it.

Of course, that's terrifying, but also hugely exciting for us. After almost 10 years in the business, our projects have become increasingly complex and this has the refreshing feel of those early days submitting games to Newgrounds and waiting for that first rating to come in.

Naturally, a completely open-ended project was out of the question. There's enough financial uncertainty when launching on the App Store anyway and we couldn't commit to a Duke Nukem Forever-style development cycle.

If we were going to give up control of our game we needed some parameters  namely a defined start and end, and within this we'd let Bar Fight Live's users go nuts.

For the starting point we decided on the scenario and genre for the game: it was going to be a fighting game (whatever that meant) and it would be set in a bar. 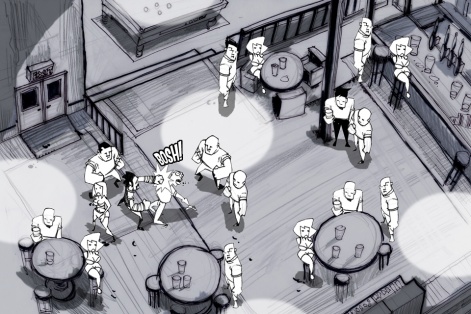 For the end point we stuck a pin in the calendar for spring next year. That seemed like enough time to create a quality title with the added complication of discerning users telling us what to do at regular intervals.

Considering the first version of the app wasn't going to have any gameplay in it we agonised over it for a long time.

We knew the potential of the project but App Store users aren't conditioned to wait for their fix of fun and we wondered how we could convince them to look at a game with no gameplay!

Taking inspiration from Kickstarter, we wanted Bar Fight Live to reward those who got involved with cool, exclusive stuff and so we started to build up a library of goodies we could release in stages, including video interviews with our team and concept images that would help the user visualise the project's potential. 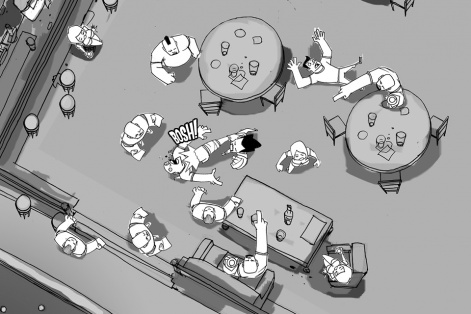 We put this in the first build alongside 'The Pitch' (essentially a fancy PowerPoint presentation that laid it all out for the user).

Crucially, the most compelling feature of the first build was the vote. This was where we really began to give up control, asking users to decide what kind of gameplay we should implement. Yes, we were coming up with the options ourselves, but we wanted to ensure there was a clear difference between the possible approaches.

We asked users to vote for their favourite gameplay option: 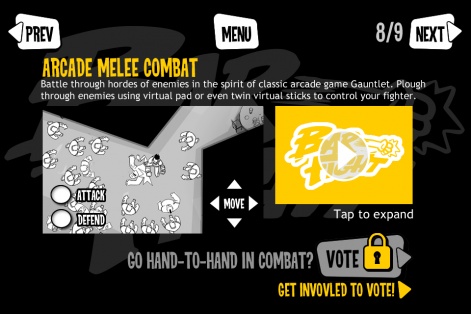 With an intro video filmed we bundled everything up and submitted to Apple.

Apple made us wait. In the end it took 13 days for Bar Fight Live to go into review, by far the longest we'd had to wait up to that point. Only 6 hours for it to get approved was something of a relief as our PR efforts were already underway and we needed people to see the app.

Unfortunately, hanging on for so long meant that Bar Fight Live launched alongside the Olympics, and suddenly we were competing with the world's biggest sporting event for attention.

Considering these odds, downloads were encouraging and feedback was positive. It's fair to say that Bar Fight Live's launch didn't set any App Store records, but having had top-five apps in the past we knew this was a very different proposition.

Immediately after launch we started to receive feedback from excited gamers and that was when we knew we were onto something. People seeing the app were getting enthused  our first goal had been achieved!

How did the vote turn out? Rather surprisingly: 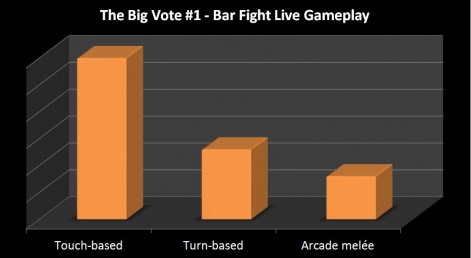 We'd guessed people would plump for the familiar (arcade melée) or the novel (turn-based) so it was refreshing to have our assumptions over-turned so early on.

Looking back at this feedback we can see there are two key areas of appeal for our users; first of all we're lucky enough to have very talented artists in our team and they really brought the Stunt Guy universe to life.

Secondly  and as we'd hoped  the opportunity to get involved in a game's development shouldn't be underestimated.

While we might think it's easy for someone to pick up Flash and submit a game to Newgrounds, the reality for most gamers is they will always be removed from the creative process.

And that doesn't sound very 2012, does it?
To find out more about Bar Fight Live, visit the game's website or download the app.