Virtual value analysis: How Pocket Planes turns the F2P model on its head

Earn the opportunity to pay

November 14th, 2012 - 01:01pm
By Zoya Street
There's still plenty of debate about how the free-to-play business model should be operated.

But Pocket Planes doesn't seem to care whether or not you spend money. Certainly it doesn't try to sell you anything.

While other games advertise new items, demand you spend money to make things happen faster, and always lead you to the store, the gameplay of Pocket Planes doesn't actively encourage you to extend your airline.

In fact, the best planes aren't accessible at the start of the game: I can't buy some Bux (the in-game currency), spend them on a legion of Cloudliners and immediately have the best-equipped airline.

These planes aren't even on display in the store.

It's as if my Bux-strapped status has afflicted me with a special kind of poverty vision that blinds me to things outside of my price range. I have to earn the right to spend money on this game.

Indeed, the way Pocket Planes controls what you can buy, as well as restricting special edition planes to winnable items in timed events, turns much of the current thinking about free-to-play games on its head.

It's something we can see more clearly as we discuss some of the individual planes.

You start the game with a set of four basic planes that includes the Bearclaw.

A tiny little bug-like thing, the Bearclaw epitomises your starting state in Pocket Planes. It can't go very far, or very fast, and it can't carry very much. With the Bearclaw, you're not so much an airline as a flying rickshaw service. 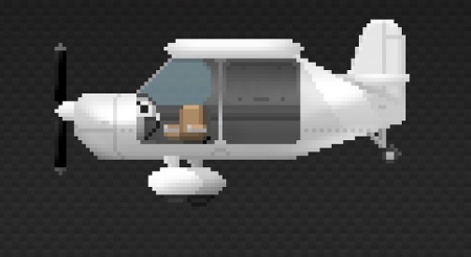 So you might expect, given the Bearclaw's unimpressive capacity, that its low price is a false economy - that smart and accomplished players would level up to a more expensive plane and end up making more profit by carrying more cargo and passengers.

But this isn't the case.

Larger capacity planes are needed in order to make longer trips, but no individual airport has enough jobs to fill these planes and make they journey profitable. Larger planes also have a higher cost per item per mile, so it takes more efficient planning to make flights turn a profit.

The effect is that in-game items in Pocket Planes contradict the method I learned playing RPGs: I can't just upgrade my equipment and sell off my old trash, because I still need small planes in order to feed in jobs from surrounding airports to the large planes.

Available to players at level 28, the Cloudliner is a stand-out example of one of the large planes that become necessary as your airline expands.

It has the greatest flight distance, speed and capacity of any plane in the game.

But despite its advanced level and high price tag, the Cloudliner doesn't look sporty at all. Its body shape bulges to fit in its enormous load. It isn't efficient either; it has the highest cost per carrying slot per mile.

Pocket Planes is not a game that rewards levelling up by allowing you to buy flashier equipment. The Cloudliner is not flashy. It doesn't even look interesting. It looks like a giant baby, with cavernous holds that need to be filled with jobs brought in by the smaller planes you've had since the start of the game.

Nothing is thrown away in Pocket Planes - everything has value in your growing collection of hungry flying machines.

As the most desirable plane in the game, Concorde should be Pocket Planes' most expensive item; at least that would be the case if Pocket Planes was any other free-to-play game.

In one manner, this is the case, however. Concorde is sharp, famous, and looks impressive. It travels faster and further than the Cloudliner. It cannot be bought for Bux.

Concorde can only be won in timed events. This means that only very dedicated players will get one. Money will not buy you beauty in Pocket Planes - you really have to earn it.

In conclusion, then, Pocket Planes is not about flying around in a fleet of pimped-out machines. It's about demonstrating you're an obsessive collector, a skilled administrator, and a smart manager.

It's not about pay to be cool. It's about earning cool.Post-script

While Pocket Planes has been a successful free-to-play game, it's not one of the most lucrative. Nor is it even developer NimbleBit's most successful game. That's Tiny Tower, which has been downloaded over 14 million times.
Pocket Planes peaked in the US as the #7 top grossing iPhone game in June 2012, dropping steadily out of the top 200 in August.

The release of an update in October boosted it back into the top 200, but at time of writing it's sliding back towards #300.