Analysis: How DeNA and Com2uS outperformed rivals GREE and Gamevil

November 23rd, 2012 - 08:01am
By Jon Jordan, Contributing Editor
The Q3 financial period is now over, but before I let it go on its merry way, there's one more piece of analysis to undertake.

While companies always compare their numbers to their previous quarters and years, for some it's also interesting to compare against similar rivals.

There are some obvious pairs of candidates in the mobile gaming space - two that I'm going to consider today.

The first is those rival Japanese social gaming platforms GREE and DeNA.

Historically, DeNA has been the larger of the two, both in terms of Japanese subscribers numbers and quarterly revenue.

Indeed, when thinking about the rapid western expansion of the pair, DeNA went bigger, faster with its $303 million purchase of ngmoco back in late 2010. GREE countered with its $103 million acquisition of OpenFeint in early 2011, and since has been the more aggressive of the two, spending $210 million on Funzio and $170 million on Pokelabo.

Of course, in terms of their expansion plans, the companies have different operating strategies.

GREE is an open platform in that developers and publishers can sign up, keeping their own publishing rights and being the named companies on the various app stores. In contrast, using DeNA's Mobage platform means developers hand over their publishing rights to Mobage; something many seem uncertain about.

Yet while GREE has been making the most noise recently, it's DeNA that's been the stronger of the two financially. 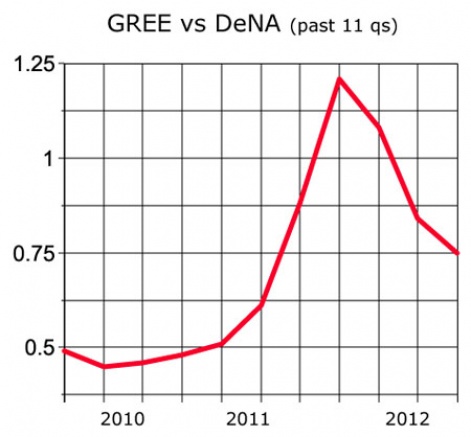 As we can see from this ratio graph, any number less than 1 means that DeNA's sales for that quarter were larger than GREE's; a situation that turned around in late 2011.

Posting two massive quarters, GREE did the unthinkable and 'outsold' DeNA, which 18 months previous had been twice its size in terms of quarterly revenue.

As can be clearly seen, however, DeNA's recent hit games in the US such as Rage of Bahamut and Blood Brothers have boosted its sales, at a time when GREE hasn't have any hits from its partners or from its first party studios, despite significant investment.

And perhaps more worrying for the company is that while its quarterly sales peaked at the start of 2012, DeNA's sales have been growing quarter-on-quarter for the past 12 months.

It's something of a similar situation when we come to look at Korean publishing rivals Gamevil and Com2uS.

Historically, it was Com2uS which was the senior partner. It was bigger in terms of headcount but as the smartphone era burned through Java game sales, Gamevil proved to be the more nimble.

In our second graph, Gamevil's quarterly sales are larger than Com2uS when the green line is over 1; something that was the case for much of 2011, as series such as Zenonia and Baseball Superstars performed well in North America. 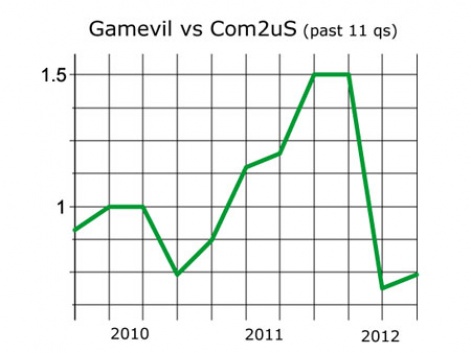 In contrast, Com2uS experienced flat sales for much of 2010 and 2011 as it tried to get to grips with new development practices and coming up with IP that would work outside Korea.

But as with GREE and DeNA, it's the past six months that have turned the tables, with Com2uS leaping above Gamevil.

Both companies are performing strongly, particularly thanks to the expansion of their third party publishing activities (partly government induced), but ironically Com2uS' massive leap in sales - doubling in 2012 - has been mainly thanks to the performance of social games such as Tiny Farm and Derby Days in Korea.