#mobilegamingeurope Your takeways for free 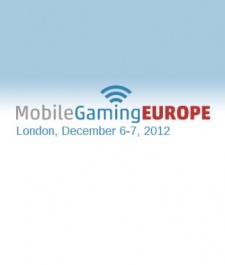 December 7th, 2012 - 10:06pm
By Jon Jordan, Contributing Editor
The first Mobile Gaming Europe conference, held in London this week, saw a lot of familiar faces taking and a lot of unfamiliar faces in the audience.

The context was a similar mix, with some ongoing trends rehashed and restated, while some speakers looked to highlight what they considered to be the trends that well be considering in 2013.

Another opportunity for PocketGamer.bix conference trends round up then....

How do you kickstart a conference about mobile gaming? According to Christopher Kassulke, CEO of German developer HandyGames, you do it by telling everyone that the days of being a mobile game developer are over.

Of course, he wasn't beating on the industry; only pointing out that the games you make for mobile devices can now be released on many other platforms - PC, web, smart TVs, set top boxes etc.

HandyGames is releasing on all these and looking to do much more in 2013, with Kassulke particularly keen on the Android-based Ouya console that's due to be released in March. Indeed, HandyGames was one of Ouya's main sponsors on Kickstarter, donating $10,000 to the cause.

However, a trend even more significant - and complex -was highlighted by Blitz Games' John Nash. He reckoned the rise of the second screen would completely changes the gaming landscape.

To a degree this is already happening with Microsoft's SmartGlass and the Wii U. But as the links deepen between all connected devices, the opportunities for new types of games and business models is really going to shake things up.

'Even Apple is looking at Microsoft in a new light because of the integration between Xbox, Surface, SmartGlass and Windows 8,' Nash argued.

Cue some more of those Apple TV rumours.

2. The tricky dynamics of definition

Consultant Nicholas Lovell was one of the first to populise the term 'whale' (a big spending player in a free-to-play game) in the UK conference scene.

He's since looked to replace it with the more positive 'true fan', but the original term remains the more widely used, mainly because it also works within the sequence of 'dolphin' (medium spender) and 'minnow' (tiny spender).

Ever inventive, however, Lovell's new approach is to subtly differentiate between the two terms.

"A whale will spend $100 in your game and wake up regretting it in the morning, while a true fan will wake up and tell all their friends about it," Lovell opined.

The unspoken assumption of many of the talks at conferences is that employing this technique or that third party technology or service will make your game an unbridled success.

Of course, it's never the case.

As explained by Oil Christie from UK developer Neon Play, and GREE's Kyoto Matsushita, success is all about hard work.

Matsushita pointed out that there are some high quality games on the GREE platform that haven't been successful, in part, because developers seem to think that the platform itself will bring them success, without the developer nurturing their games with updates and the like.

But the biggest reason for its success? Well, that would be the month-long Google Play promotion the game received.

Similarly, Flurry's Richard Firminger said that unless developers are looking to spend between $100,000 to $400,000 on user acquisition, they shouldn't be thinking about getting a top ranked game.

The moral of the story is there are silver bullets (app store features) but you can't rely on them. Or you can apply the brunt force of massive marketing (dum bullets), but there's not much available inbetween.

Outside of the hardcore console sub-clique, no one discusses whether the free-to-play model is moral any more. (Maybe we should.)

Instead, much of the talk at conferences such as Mobile Gaming Europe is contextualised in a very deterministic and inhuman manner.

My dislike of the term 'user' for 'player' is ongoing, and my fear about the industry's confusion between the baby of fun and the dirty bathwater of monetisation grows apace.

It's a situation that was further underlined by a great talk from Swrve's Steven Collins about its predictive behaviour analytics tools, which enable developers to segment their players into different groups and send them tailored messages depending on how you want to influence what they do.

Now, there's nothing wrong with the technology Swrve is building. Collins and co-founder Hugh Reynolds are extremely clever chaps (having previously formed Havok) and are fulfilling an industry need. But we all know that once such tools are available, the only thing developers are going to be using them for is hardcore monetisation.

What we really need is someone to build an analytics platform that allows us to enhance players' fun, or 'interesting game design' as it used to be called.

After all, can we keep running an industry where 98 percent of active players don't seem to care enough to pay for their experience and 62 percent of those who download your game don't bother to play after the first month?

But leading on from point 4, perhaps I'm just getting old fashioned in my mid-age.

According to consultant Will Luton, players are all growed up and can well handle themselves against the rapacious demands of developers.

"I don't think most developers are monetising hard enough," he suggested, echoing the words of NaturalMotion CEO Torsten Reil.

Indeed, Luton was happy to confess that he spends over £100 per week on physical Magic the Gathering cards, while Nicholas Lovell contextualised £100 saying 'It's a good meal for two with wine in a European city'. (He's obviously more of a high roller than PocketGamer.biz. Luckly old Mrs Lovell.)

The point is, however, that we all spend money - often large amounts - on our hobbies and our social experiences, and that is exactly what mobile games now are.

So go forth and prosper.