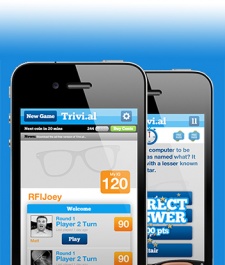 December 14th, 2012 - 11:15am
By Guest Author
Arkansa-based Joey Nelson is the president and co-founder of MobileFWD - the studio behind iOS social quiz app Trivial.

Monetising a turn-based, social mobile game relies on creating an engaged community and user base, with players who invite their own friends and share the game on their social networks.

Without a community that shares with friends, the social functionality breaks down, leaving no one left to play - and more importantly, pay.

Our game Trivial is a social trivia game that we developed with the help of Jeopardy contestants and former Quiz Bowl champions.

We put a lot of work into this game and saw the potential for it go far up the Apple charts. However, if we couldnt get our users to invite their friends and share the game, we knew it wouldn't go far.

To better understand user engagement, retention, and ultimately, the monetisation of our game, we decided to add mobile analytics into initial beta testing and see if there were any interesting insights we could uncover to improve the game overall.

For this experiment, we went with Apsalars free mobile analytics product, ApScience.

What we uncovered ended up increasing user invites by over 300 percent and doubled the virality of the game overall. Here are the three best strategies we learned.

1. Use a Mobile Specific Provider

In the beginning, we felt like we were staring over the edge of a giant black analytic abyss.

Our team was accustomed to using Google Analytics for dissecting websites, but for mobile apps the tools are different.

2. Selectively Define Which Events to Track

We looked for retention metrics to help us understand if our users were coming back into the app after a set period of days.

In our industry, we typically will measure to see if they have opened the app more than five times.

When setting up your mobile analytics, define which events to track by examining your business goals. At Trivial, we wanted to optimise for user engagement, so we looked for events that related to three key things in the game: acquisition, monetisation, and retention.

To prevent cluttering up the data, we chose not to track events that didn't fit either in one of these three categories or under the overarching theme of user engagement. Be specific, and track the events that are going to help you meet your goals.

3. Use Funnels and cohorts to optimise for higher user engagement

Our most important goal was to get as many players as possible into the game loop.

In other words, we needed to make sure that at least 95 percent of users who entered the app actually started a game against a friend or a random opponent. Therefore, we made changes to the funnels in the analytics to make sure we were tracking for this appropriately and watched closely.

With Apsalar's funnel reports, we were able to identify a drop-off in the conversion funnel for user invites. Using this data, we found that the invite button was buried under "New Game."

This posed a huge problem, as it was limiting the number of games a player could play. We moved the invite functionality out to the dashboard and immediately saw invites across the board increase by 300 percent.

Additionally, we noticed huge drop offs once users reached a certain number of simultaneous games. We made another tweak in the functionality of the game by adding two new users per session, on average, and immediately doubled our viral coefficient.

Whenever we rolled out changes, we used Apsalar's cohort reports to track the effect of these changes on user retention, engagement, and monetisation to validate the success for each change.

Whenever a new feature is implemented, compare the behavior of users who experienced the new change versus those who did not with cohorts.

This will allow you to see the effect that each new feature has on user behavior and will give you the knowledge you need to adjust your games' functionality for the best possible engagement, retention, and ultimately, monetisation.

It's critical that you set up funnels and cohort reports to uncover blockages and bottlenecks.

Effectively implementing mobile analytics will not only show you more about your users' behaviour, but will also unveil issues within the functionality or design of your game that could potentially keep it from ever being successful.

Knowing your users, and knowing how they interact with your game, will allow you to make the improvements and adjustments needed to become a hit.
You can find out more about Apsalar on the firm's website. You can download Trivial for iOS here.