Thinking outside the box: The making of The Room

Fireproof on design, marketing and monetisation 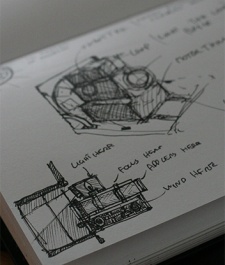 June 19th, 2013 - 01:45pm
By James Nouch, Staff Writer
Since its launch in September 2012, The Room has been downloaded 5 million times, accumulated more than 2 million premium-priced sales and picked up dozens of awards  including a Game of the Year gong from Apple.

Given the scale of this success, it's easy to forget that The Room was the very first release from Fireproof Games.

Founded in 2008 by six senior artists from Criterion Games, the Fireproof team spent four years as an art outsourcing team before bringing The Room to market, during which time it contributed to the likes of Killzone, Blur and Little Big Planet.

The studio may have made "fuck all money" at first, but according to commercial director Barry Meade, Fireproof's long-term plans had always been to create a game of its own.

"However, as we had no starting money and no programmers, outsourcing was our path to making it happen," he explains. "So we set about making ourselves a credible and trusted team-for-hire within the industry.

"Saving money over the years, and growing our studio very strategically, we basically hunkered down and played the long game until January 2012 when we finally had enough to start development."

But Fireproof's savings didn't amount to a huge sum. The company had set aside enough to pay a programmer for just six months, so the team had to be organised and disciplined in order to make the most efficient use of its valuable coding time.

As such, a timeline was drawn up and it was decided that Fireproof would use Unity to test three ideas in three months. Then, the best of these prototypes would be pursued to completion in the time they had left.

Prototype one was called Tiny Planets, and Meade describes it as "Angry Birds Space without the Angry Birds." 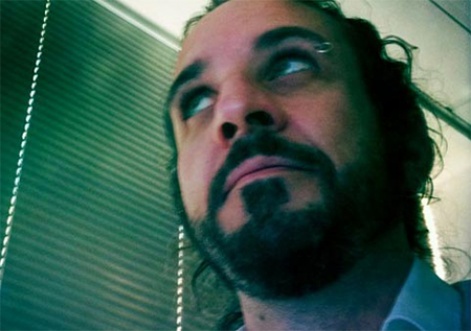 Seeing as Angry Birds Space was only a few weeks away from launch at this point  and went on to generate 50 million downloads in its first 35 days of availability  it's probably fortunate that Fireproof didn't select Tiny Planet as its preferred prototype.

Fireproof design director Mark Hamilton would later look back on this decision with some relief. "We really dodged a bullet there," he said in 2012.

The studio's second idea was called Puzzle Box, and Meade describes its genesis as "a toy-like experimental game about manipulating 3D objects using touch controls, based vaguely on Chinese puzzle boxes and inspired by Zen Bound and some other stuff."
The Room's creepy atmosphere, sinister storyline and fiendish puzzles  they all came later. But even in this bare bones form, Fireproof could see that Puzzle Box contained considerable potential.

In fact, the team never got round to creating a third prototype, and decided instead to dedicate its remaining coding time to unlocking the Puzzle Box's promise. 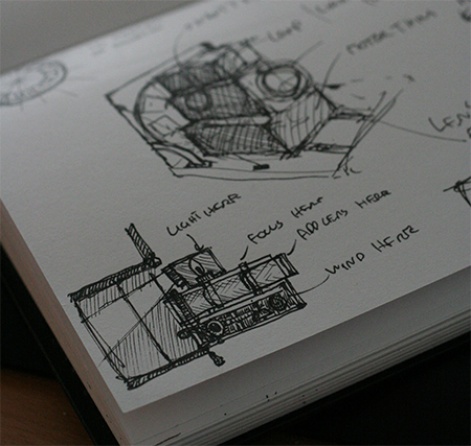 An early The Room concept sketch

Along the way, the game's aesthetic and ambience  which Meade describes as "HP Lovecraft mixed with ancient history and Victoriana"  came together. At this stage, the ideas came thick and fast, helped along by the fact that Fireproof founders had previously brainstormed ideas for a horror game, too.

In fact, the final game bears the imprint of Fireproof's unique, and rather lop-sided, setup.

"We had very little money, a tiny games team and a room full of artists next door. At the time, Fireproof was made up of one programmer and ten artists," Meade explains.

"So it's no accident that The Room is fairly simple programmatically but features a lot of nerding out on the materials in the artwork."

And this abundance of artistic talent, combined with the team's exactingly high standards, also ensured that The Room remained a simple, focused experience.

"We spent our energy where we could afford it  polishing the look and feel of everything was very very important to us so by default that meant the game could not be very big."

But The Room's polish and pristine visuals belie that fact that Meade and his colleagues "very much made it up as we went along."

Everything except the game's basic puzzle box design "came about by just playing the game and seeing what ideas it inspired."

Meade stresses that the finished product was no fluke  "Even when winging it in experiments, taste is always a factor," he insists  but The Room is certainly not a product of detailed forward planning. 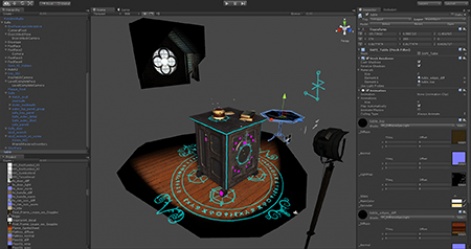 The Room takes to Unity

Right from the outset, however, there were one or two certainties. The Room was always going to be a premium-priced game, for instance. "We never seriously considered free-to-play," Meade says.

"Free-to-play seemed like such an arcane method of game making to us, so we stuck with what we knew and what made sense. We just believed that there was a very big pool of gamers out there who will pay for anything they think has merit.

"I don't think players really care how they pay for things  who cares if its in-app or not? The games industry seems to care a lot more than the players do."

Meade also has his misgivings about the model's effects on the industry. "There is a worry about a race to the bottom effect with users," he says. "95 percent of all freemium players pay nothing at all for a game that basically lasts for infinity.

"This has led to the point where asking for even 99c in the App Store is considered a rip off. As devs we're supposed to get annoyed by piracy, yet here are legitimate games being peddled for nothing to a truly enormous bloc of people."

So, with a final price tag decided, Fireproof Games began considering its launch strategy. I ask Meade whether the team had a detailed marketing and PR plan in place for the game before release.

"Yes," he replies. "We hoped beyond hope that Apple would feature us."

"Other than that we had our own basic ideas  we emailed all the best websites we could think of and told them about our game, and a few main reviews appeared more or less simultaneously on release, so that was helpful." 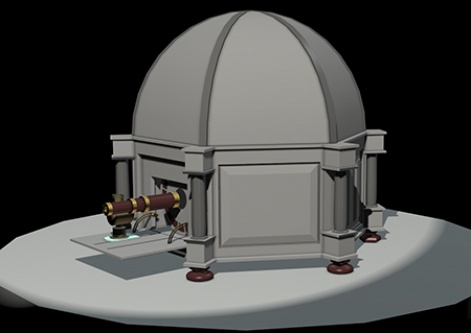 So other than its own correspondence with website editors and Apple representatives, Fireproof didn't dedicate much consideration - or any budget whatsoever, in fact - to marketing or PR.

"We had no money anyway, so we just left it in the lap of the gods and counted on word of mouth to do that for us," Meade explains.

Fortunately for Fireproof, Apple liked the game, and on 18 September 2012, The Room launched with a featured spot on the App Store. I ask Meade how big an impact he thinks this had on the game's success.

"Huge," he responds. "We made over $100,000 in that first week we were featured, and even though the sales crashed afterwards, The Room has continued to sell lower figures but solidly since."

"So while our long-term sales are mainly down to word of mouth, good will and good reviews, the featuring was a huge kick-start for us."

In total, The Room cost Fireproof less than £80,000 to make. "Basically the wages for six months of development," Meade explains.

That investment was recouped within a week of the game's release, and The Room has gone on to gross millions from iPad and iPhone owners since.

More recently, Fireproof has brought its puzzle-box to Google Play and the Amazon Appstore too, where it's performed "better than we had hoped," according to Meade.

"Amazon in particular has done really well, and they told us The Room is the highest rated game in their store," an achievement he describes as "egotastic." 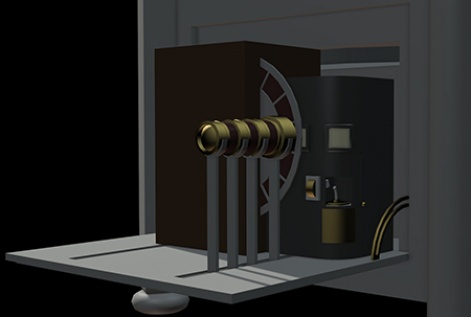 Naturally, there's a sequel in the works, and Fireproof hopes to launch The Room 2 in Autumn 2013. Before that, though, the studio also plans to produce a free update for its existing players  due this Summer.

"Long term we want to stop all our work-for-hire and concentrate on our own internal projects so that's what we're working to now," he says.

"We're trying some experiments right now and if we come up with something cool we'll make it."

In many ways, The Room is an unlikely success story. It's a quiet, contemplative game that launched at a premium price point. It was the App Store debut for its developers, too, a group of artists with little to no experience of mobile gaming.

So what was it about The Room that made it so popular? Meade has a few ideas.

"Besides the graphics and audio, people seem to appreciate the puzzle designs and the control system a lot. Also there's the mysterious mood of The Room and the relaxed-but-creepy headspace we created," he says.

"We made the game Spartan enough for people to read into it all and engage their imagination, so we create a similar feeling people have when reading a novel. Individual gamers stick to particular genres but it seems that everybody likes to get their spine tingled."

I ask Meade whether he thinks that this will eventually come to be seen as the hallmark of a Fireproof game.

"Long-term, we just don't want to release anything that isn't great," he answers. "If we continue doing that, then we're sure it will get us somewhere." 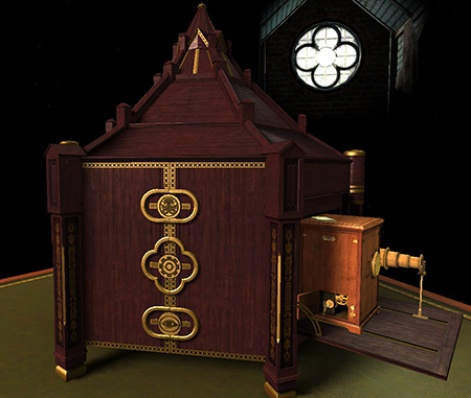