XCOM: Enemy Unknown and Where's My Mickey? are the highest-reviewed iOS and Android games of Q2 2013

July 12th, 2013 - 09:25am
By Jon Mundy
In the same way that public game companies announce their financial sales numbers every three months, the Quality Index (Qi) publishes its own quarterly figures.

But instead of assaulting your ears and eyes with talk of operating profit, DAUs, and monetisation (brrrr), this here Quality Index quarterly round-up ranks the top 20 best-reviewed iOS and Android games that were released during the period April 1st - June 30th, 2013.

As for the reviews themselves, the iPhone, iPad, and Android Quality Indexes boast over 650,000 (in total) of them from the world's leading online sources, including 148Apps, Slide To Play, Pocket Gamer, and AppSpy.

The second quarter of 2013 pretty much picked up where the first left off, with a similar mix of original iPhone classics, stellar sequels, and top-notch console conversions.

Firmly in the final category and sat right at the top of the Q2 2013 iPhone Quality Index chart is XCOM: Enemy Unknown. It's a really quite phenomenal conversion of a recent console game, packing in all of the necessary squad-based tactical action while feeling perfectly at home on a little touchscreen phone. Amazing.

Talking of pitch-perfect conversions, Gemini Rue made quite an impression down at #5. Taken from a 2-year-old PC game, this atmospheric adventure game further proves that iOS is the future of the much-loved point-and-click genre.

Besides some slinky conversions, Q2 has seen a number of high-profile sequels striking just the right note with iPhone gamers.
Kingdom Rush: Frontiers had the unenviable task of following up what we reckon is the best tower defence game on iOS. Seriously, it's like David Moyes following up Sir Alex Ferguson.

The designers at Ironhide managed the task admirably by sticking to a very simple philosophy - give 'em what they want. And it turns out what we wanted was more of the same. Mr Moyes - take note.

Another sequel with an unenviable task was Draw Something 2. Not only was the first game pretty superb, but it was also a bit of a phenomenon. This follow-up may not have captured the public's imagination to quite the same extent, but it is a worthy follow-up nonetheless.

That's not to say that Q2 of 2013 has been devoid of original iPhone IP. Hell no.

At #6, Icebreaker: A Viking Voyage was the first game to be released under the Rovio Stars publishing label, and it proved to be more than worthy of the Angry Birds developer's name. That it's a highly polished casual physics-puzzler is just about the least surprising thing about the game.

Meanwhile Badland, at #9, is a charming casual adventure set in a dark fairytale land. Imagine an endless-runner with levels and a sense of narrative purpose and you'll pretty much have it figured out. 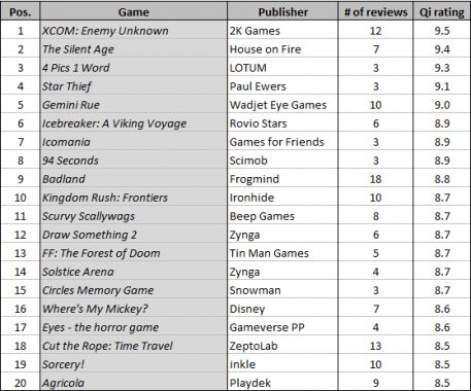 We were privileged to receive an iPad conversion of one of the finest action RPGs ever made, BioWare's Star Wars: KOTOR. This faithful port (which sits at #6 in the chart) features sympathetic touchscreen controls and dozens of hours of levelling, decision making, Force persuading, and wookie baiting.

Talking again of conversions, Mode 7's excellent Frozen Synapse brings up the rear at #20. In fact, with XCOM: Enemy Unknown again at #1, the squad-based strategy genre has stealthily flanked the rest of the quarter's selection.

The second quarter was another strong one for gamebook games, particularly on iPad where they're most at home.

Tin Man Games has been incredibly strong in recent times, thoughtfully repurposing the Fighting Fantasy series of Choose Your Own Adventure books for iOS. The Forest of Doom, at #13, is one of the strongest yet.

Continuing the theme at #19, inkle's Sorcery! is another compelling fantasy tale - this time combined with a compellingly tactile battle system.

A pirate walks into a pub...

Comedy is the hardest thing to nail in video games. We'd probably need more than our ten fingers to count the number of genuinely funny games we've played, but we certainly wouldn't need all of our toes.

That's why this quarter we're happy to celebrate two iPad games that succeeded in making us chuckle.

At #10, Magicka is a quirky brawler-cum-action-RPG that involves combining various magic spells to hit your enemies with fresh status effects. It's also brilliantly silly. 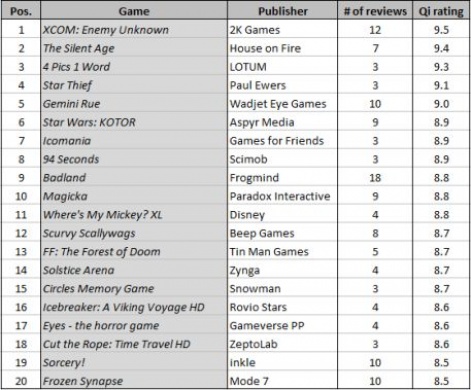 Meanwhile at #12, Scurvy Scallywags is the latest effort from the genius mind of Ron Gilbert - the man behind the Monkey Island series. Yes, it's got pirates in. And, yes, it'll make you giggle.

But it's also an unexpected mix of RPG and match-three puzzler, so it's fun to play even if you don't like Mr Gilbert's previous games or his sense of humour.

It's fair to say that the recent success of mobile gaming was built on polished physics-based puzzlers, and there are two fine examples of the form at the top of the Q2 2013 Android Quality Index chart.

Where's My Mickey? from Disney takes the #1 spot. As you may have guessed from the title, its water-shifting gameplay is very similar to Where's My Water? and its spin-offs, but with a certain famous mouse taking the lead role.

Just behind at #2, Cut The Rope: Time Travel follows on from the famous original with more candy-freeing action. This time, there are a number of companions to help you feed Om Nom.

Elsewhere, developers have been looking back before Android and iOS hit the scene for inspiration.
Nimble Quest evokes the memory of early Nokia gaming great Snake with its arena-based conga line action game. Here, however, you're adding RPG heroes to your cause, with all the unique individual abilities that entails.
Combo Crew, at #18, looks even further back to a time of side-scrolling beat-'em-ups. This old skool brawler features a smart touch-driven combo system that's decidedly new.

There are a couple of other notable Android entries for the second quarter of the year.

Tin Man Games makes another strong showing with Trial of the Clone, which fits into two of our previously mentioned categories - it's a gamebook, and it's really rather funny. 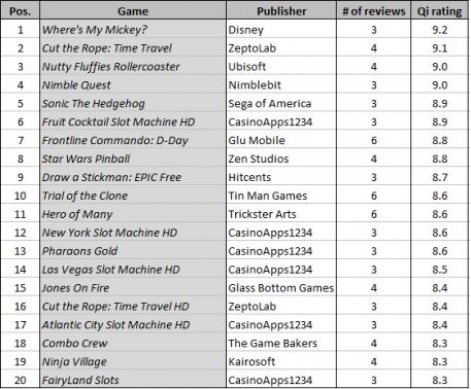 Then, there's Hero of Many, which doesn't really fit into any category other than 'really good game with beautiful arty graphics.' It's all about guiding tadpoles to safety, but it's far more interesting than that makes it sound.

To qualify for a Quality Index rating, a game must have received three or more reviews from the 65+ sites that feed into the Quality Index's databases.

Should the number of reviews also be identical, the Quality Index rating comes back into play. For while we only display the average score to one decimal place, the list is generated to further significant figures.