Opinion: Mobile gaming's throne of power is the toilet, not the sofa

Where unconsoles are going wrong 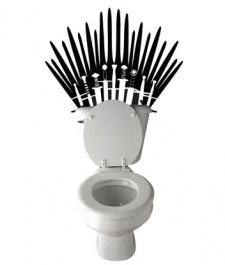 August 12th, 2013 - 01:20pm
By Matthew Diener, US Correspondent
I'm going to start this opinion piece with a confession - I've played mobile games on the toilet.

You might think it would take an amazing amount of courage to commit that sentence to text and attach it to my name, but it's really quite simple because I bet you've gamed on the toilet too.

And if so, we're not alone - mobile games are built to be played on the toilet and this is something developers and publishers should embrace as they look to the future of the industry.

In 1977, Taro Gomi famously penned the immortal children's book Everyone Poops and put into writing a basic truism of the human condition.

We all sleep, we all eat, and - after a few hours - we all feel the urge spend time on the toilet. Whether you're a CEO, fashion model, or workaday office employee, this basic biological impulse is a great leveler that reminds us of our connection to our fellow man.

It's also something that stands as one of the greatest strengths for the mobile (and handheld) gaming market, as it creates a captive audience in need of entertainment.

This shouldn't be forgotten about, as it arguably helped popularize mobile gaming, but the emerging generation of Android-powered unconsoles seem sure that toilet play isn't what gamers are after.

Instead, the unconsoles feel that mobile gaming belongs on the living room TV instead of the phone screen - and that's a problem.

It's a problem because this shift in focus is an unnatural one, and one that runs contrary to the nature of mobile gaming.

While speaking on Infinity Blade's development back at GDC 2011, Chair Entertainment's CEO Donald Mustard famously noted that "The biggest thing that nobody wanted to say but was actually the truth, was that everyone was playing these games while going to the bathroom."

This short, bathroom-friendly play session was something that Mustard and his team actively thought about.

"When we were balancing Infinity Blade we were thinking about how long it would take for your leg to go numb while you were sitting on the toilet," he explained.

If Mustard can admit this, then so can we.

Most, if not all, mobile games are built with this short style of play session in mind. Taking them to the television robs them of their flexibility and their greatest advantage over traditional living room consoles.

Handheld game consoles - like the 3DS or PS Vita - are also well-suited to toilet play, but neither brand has been particularly interested in migrating to the big screen.

This is most likely due to the fact that both Sony and Nintendo already have a presence in the living room, but both companies also realize that the ability to play anywhere - including the toilet - is a major asset that they don't want to lose.

It's not a demographic that I'd expect Iwata to brag about during the Nintendo financial earnings report, but the surging popularity of the 3DS shows that gamers are interested in taking their games with them everywhere - and that includes the bathroom.

Ascend to the throne

Ultimately, it's up to you whether you declare your history of toilet play as openly as I do - but if you own a smartphone, tablet, or dedicated gaming handheld, I'll safely assume that you've brought it into the bathroom with you at least once.

While this might not be something you admit to at a dinner party or disclose on a first date, it's something you should be proud of because you're actively controlling your gaming habits and consuming what you want to consume in a place where few of us want to think about consuming anything.

So, to the unconsoles, I say let the consoles have the living room and keep mobile games where they belong - on our phones and tablets - wherever we go.

Just don't ask them to admit to it in public.

Reply
Olli Neumann
Well, I admit, I do it too. And it's not only games, it is also books and reading pocketgamer (no joke). And yes, until my legs are numb. I wonder why there is no game that incorporates these special circumstances :)
Posted 8 years, 5 months ago