Why would anyone want to play your game?

August 15th, 2013 - 01:00pm
By Guest Author
An online and mobile expert since 1998, Oscar Clark is the evangelist for gameplay video sharing tool Everyplay from Applifier.

One of the hardest things to do is to guess which games are going to succeed in advance.

It's particularly confusing when you see two games of essentially the same quality from a gameplay or art perspective, only one has 100 downloads while the other has a million.

There is, of course, no formula for success; but ignoring the needs of your players is formula for failure.

There is a habit amongst game designers to talk about their desire to make the best game they can, which is admirable; but is it enough?

There is already a wealth of content out there, more good games than I could possibly play in my lifetime. Why should I play yours?

The answer starts with the motivation of you - the designer; why do you want to make games?

Is it just that you loved playing Monkey Island or Mario 64?

The love of playing games alone is rarely a good reason to make games. Of course if you don't love playing the kind of games you want to make its usually a bad sign too.

But we need more. We need to bring something to the experience which is our own contribution to the genre; something which can make which stands alone.

Making a game your own isn't about copying something which already exists and changing a few art assets.

We need to get under the skin of the game and consider what the mechanics means in terms of the flow of play as well as how we emotionally engage with the experience. We have to create something which is accessible but at the same time stands out from the crowd.

Scott Rogers, in his book LevelUp, talks about the Triangle of Weird.

The idea is that we can change any two of three attributes - the Activities, the Characters, or the World - but not all three at once. 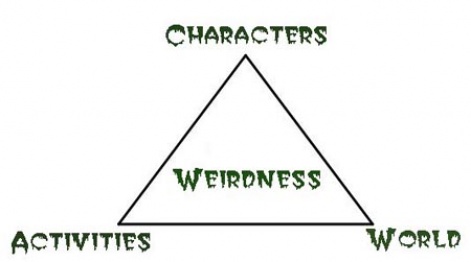 The point is that players engage most easily when we build our game from a familiar foundation, rather than creating something without any precedent or context.

That foundation may come from the core mechanics, art style, narrative or any other factor, and as long as it exist, our unique twists then allow our game to stand out.

We have so many aspects where we can innovate but one of the side-affects of the widespread appeal of games is that not all the players are like ourselves.

We have to consider what our game brings not just from our perspective, but from the point of view of at least two other kinds of players.

There are many techniques to help us do this. We can (and should) market test the options; but that can be costly. So to help narrow things down, one of the techniques I use with games teams is a thought exercise which asks us to consider the perspectives of other players.

Imagine your typical target player. Give them a name, gender and age as well as considering their motivations to play games.

I tend to start with 'Bob', who I imagine is like me but doesn't work in the industry. He is in his early 40s and he used to be a hardcore gamer but with work and family he doesn't get to play as often as he used to. He likes action games, but has to admit that he isn't as fast as he used to be so tends to look for more relaxing games on mobile nowadays.

I also like to use the Player Reward behaviours from Richard Bartle, which are well worth reading up on. 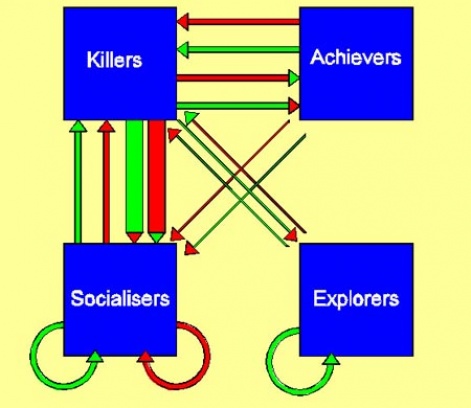 Bob is an Explorer now, but used to be an Achiever and occasionally the competitive spirit overtakes him.

Now we know 'Bob' we have to ask ourselves some important questions:

Next let's repeat the process with 'Kate'.

She's in her mid 30s and only started playing mobile and social games a few years ago.

But recently she has been branching out to try more hardcore styles of play; but this is a fragile change which could easily be broken if she has a bad experience.

In terms of reward behaviours she likes collecting things and plays more when there is a social context to the game, but wouldn't quite fit into the classic definition of Bartle's 'Socialiser' type.

Ask yourself the same questions for Kate.

And after all this is done try to step back and work out how you would explain these core values of your game in just one sentence.

This is your Unique Player Proposition.

If you can't or the proposition isn't unique you really need to rethink the design.

A world of possibilities

Of course, don't just use Bob and Kate. You need to create your own player stereotypes because this is about unlocking your own prejudices and associations.

If you have access to real player data, use that to define a psychographic profile for each of the segments.

The more real data you can use the better, but even then I find it amazingly powerful to give Bob and Kate their names, as the names we choose are often associated with deeper qualities of personality from similar people we know.

This allows us to be more honest with ourselves about what our game does that's new.

This is just one technique you can use. It's flawed, but it allows us to create a hypothesis we can test in our minimum viable product.

Without knowing your Unique Player Proposition, and finding ways to test it, the chances are you are going to fail.
To find out what Oscar's evangelising, visit the Everyplay website.