Vancouver Week: Why mobile matters in Canada's capital of creativity

The city that saw off a slump and soared 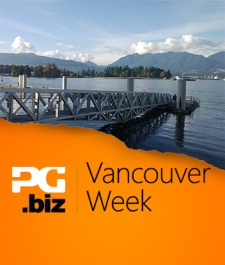 Here's a quick geography lesson for you: Vancouver sits on the south-western coast of mainland Canada. It's the largest city in British Columbia and one of the most ethnically diverse in the country.

It also happens to be just a two-hour plane ride away from San Francisco, Silicon Valley, and the technology and game development hub that resides there.

But in our discussions with the region's top studios  as a part of a week long look at the mobile development scene in the city - these facts were quickly glossed over.

Yes, Vancouver is conveniently located  benefiting from Canadian federal tax breaks as well as relative proximity to US development hotspots  but its true appeal is more intangible.

During our sweep of the city, it was Vancouver's "tight" community that stood up as its greatest asset and, most important, the primary motivation behind developers remaining in the region  even after the city suffered a notably difficult year in 2012.

For GREE, which founded its Canadian offices right in the middle of this difficult period, Vancouver was chosen "because of its robust creative community, with lots of talented artists and experienced game developers."

In our conversation with GREE Canada's general manager Steve Lin, he explained that "the Vancouver game development community is very tight knit. Everyone seems to know or have worked with everyone else."

The Japanese giant enjoys a friendly rivalry with DeNA Canada, of course, which is located just a kilometre down the road, but for Lin, this blend of co-operation and competition "drives us all to be better."

The 2012 downturn, meanwhile  which saw the city hit with studio closures and layoffs  was a product of the transition to next-gen and mobile platforms, says Lin.

"It's during big transitions," he argued, "that we inevitably see shifts in how studios operate."

Hothead Games, by comparison, is no newcomer to the Vancouver scene.

The company was founded back in 2006 by a team of Radical Entertainment veterans, and quickly set about making a name for itself with quirky downloadable games such as the Deathspank series for PC and consoles.

But in 2010, Hothead "saw an opportunity to transfer our focus to the emerging mobile market," explains director of marketing Oliver Birch. "It was a risky move for us, but it proved to be the right one."

Birch also speaks highly of the city's sense of community, as well as its role as a "nexus" of veteran talent and a home to many "excellent universities."

Furthermore, he shares Lin's view that the events of 2012 were a product of industry transition. "Companies focused on console have certainly felt the pinch as that segment of the industry has experienced a recent downturn.

"But that same period also saw a good number of new studios focused on social and mobile games pop up all over Vancouver. This new foundation has seen the likes of Kabam, DeNA and GREE invest in studios here."

So, despite the studio's relatively recent foundation, East Side Games COO Josh Nilson is no stranger to Vancouver and what the city has to offer.

"It is a really amazing city," offered Nilson. "Close to the mountains for snowboarding, the ocean for surfing, lots of bars for boozing and coffee places for hipstering. We also have a very diverse culture, so people move and travel here from all over the world."

In our conversation, Nilson waxed lyrical about the quality of Vancouver's studios, its talent pool, its educational establishments, and the abundance of community events.

He's modest when we ask how East Side Games weathered the storm of 2012, too. "Those of us that made it through did so by hard work, sharing information, loving and connecting with our fans and just plain luck."

We also caught up with the founders of Kingdoms at War, developer A Thinking Ape  Wilkins Chung, Kenshi Arasaki and Eric Diep.

This trio emphasised the skilled workforce that Vancouver has also been able to offer  even though its tax incentives may not match up to those offered in Quebec or Ontario.

"There has been a lot of press around how a lot of big name developers shut down and moved to other cities because their tax incentives are more lucrative," they explained.

"We believe that companies making decisions solely based on these incentives are operating in a short sighted manner, trading the ability to build a talented workforce for near term financial gains.

"We see things a bit differently. Talent is always priority number one, and regardless of what the tax situation is, we would still be in Vancouver because we believe it's the best place to grow our company," the founder concluded.

Throughout this week, PocketGamer.biz will be examining Vancouver's mobile games industry thanks to a series of full-length interviews with the local scene's major players above.

Check back each day to find out more about Canada's cluster of creativity  one that's endured for decades - and to learn exactly why the city's stars are so passionate about the place they call home.

Read out interview with GREE's Steve Lin on on setting up in the city where competition meets co-operation here.