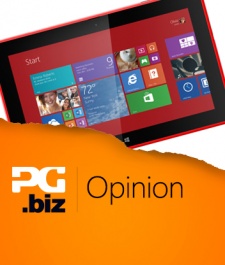 Apparently, the big boys at Microsoft had no idea that the Twitterati would immediately ditch the Xbox One moniker they'd so carefully be nurturing in favour of the far less flattering 'Xbone'.

It hadn't occurred to them that, unlike those sat around gleaming desks at Microsoft offices across the globe, the masses would be looking for an easy way to deride rather than support the firm's new vision for Xbox.

To be honest, Microsoft's complete mishandling of the Xbox One reveal may have served as something of a reality check for the giant. The company has been seemingly unaware that, across large portions of the gaming and tech industries, its name is mud  and has been so for some time.

Had Microsoft been aware of how poorly the company was perceived by many, it might have seen how its decision to give Windows RT  and, in turn, Surface RT  a distinct brand from Windows 8 risked pushing it into the very same pitfall it was soon to suffer with Xbox One.

Windows RT was universally derided by a large portion of the press that had little interest in conveying Microsoft's message: That it delivered a Windows 8 experience more tailored for tablets.

Instead, confusion over the name, what relation it had to Windows 8 and pre-existing hostility from some quarters regarding Microsoft's Metro-fuelled redesign of the Windows platform led to it being severly trashed.

There was, frankly, a move by some journalists to intentionally misinform  or, at least, misrepresent  what Windows RT and Surface RT proposed to consumers.

Much on the confusion centred around the use of the words 'apps' and 'programs'. For me, apps are the things you, by and large, install from app stores. Programs are the traditional desktop tools  the word processors, graphics packages and games that previously would have been installed via disk  more commonly found on PCs.

Scores of sites, however, blurred the lines between the two, leading to a large body of consumers either believing that you couldn't install apps of any kind on the Surface RT, or that you could only install Microsoft releases.

It was a narrative that, when reports began rolling in suggesting Surface RT wasn't selling all too well, few journalists were willing to deviate from.

The truth, however, is that Surface RT has always been a decent bit of kit. Its failure had very little to do with the device itself, and everything to do with Microsoft's hapless approach to selling it.

Incidentally, the Xbox One reveal followed almost the exact same path, with the suggestion that the console's initial approach to second hand games, its need to check into the internet once every 24 hours and a Kinect that was 'always on' leading to mass confusion.

Many consumers mistakenly believed they'd lose all their game saves if they lost internet connection, or that Kinect would record videos of them playing games in their pants or picking their nose in front of the TV to automatically upload to YouTube.

Microsoft appears to have learned its lesson to a degree, however.

The addition of a 'Start button' on Windows 8.1  which, as any Windows aficionado will know, actually changes very little  has delivered positive headlines from a press too lazy to investigate the facts.

Surface, too, has been rebranded. Surface RT has become Surface 2  a subtle distinction that transforms the device from a supposedly budget and borked half measure to the standard hopping on point for newcomers to Microsoft's tablet platform.

But  as this article's headline suggests  it's Nokia that, for me, looks set to do more to rescue Windows RT (again, now cleverly rebranded as Windows 8.1 RT) than Microsoft itself.

Scan any of the articles pertaining to Nokia's Lumia 2520 reveal and you'll find few that make a big play of the fact that the tablet runs Windows 8.1 RT rather than Windows 8.1.

This is despite the fact that many of those same writers have been proclaiming RT dead for many a month now.

Why? In part it's because Nokia is yet to reveal a 'premium' Windows 8.1-equipped edition, which helps deflect attention away from what the Lumia 2520 doesn't have in favour of what it does.

However, of greater impact is the fact that Nokia understands that the burden of responsibility for how well its Windows tablet sells lies firmly with it, rather than Microsoft.

Whether selling Windows 8 or RT tablets, few of the OEMs who have served up Windows tablets during the last 12 or so months have done anything other than shove Microsoft's OS on their respective devices and hope that's enough to sell them.

The result is, a batch of seemingly indistinct devices with confusing names that make little attempt to convey what they can offer that their rivals can't.

It's exactly the same issue Microsoft faced with the initial batch of manufacturers who released Windows Phone 7 devices  few made any moves to put their own print on the platform in order to draw in consumers.

As a result, Nokia now controls around 80 percent of the Windows Phone platform, despite arriving late on the scene.

Some of that has to do with the fact that its hardware is, by and large, superior to that offered up by HTC and Samsung, but also of note, Nokia is the only manufacturer to bring its own software to the platform, too.

Buy an HTC Windows Phone and the 'exclusive' apps you'll have access to include a connection manager to enable you to manage your wifi connections and an audio app that normalises the volume of your MP3s.

Nokia, however, has launched a rush of photo and media based apps designed to reinforce its focus on fitting its devices with the best cameras. It also has a well regarded social platform designed to aid game discovery, allowing users to recommend good titles to their friends.

It even has its own games, signing deals to bring across titles to Windows Phone that are only available on Nokia handsets.

It has a batch of map apps, a turn-by-turn navigation tool, a music streaming platform, an eReader, a cloud-saving platform and an app that lets you 'glam up' pictures of yourself with the addition of (often amusing) make-up.

Nokia was also the only company to launch what now appears to be a successful public campaign to bring Instagram to Windows Phone, encouraging its userbase to effectively petition Facebook for official support.

In short, Nokia has understood that, to bring value to what is a closed operating system, it has to go above and beyond Windows Phone at its base to give consumers a reason to tie themselves to the Lumia brand, rather than others utilising the same OS.

Nokia's Lumia 2520 reveal suggest it plans on doing the exact same thing with Windows 8.1 RT, bringing both its camera apps and its new StoryTeller platform  which literally maps out people's photos into a geographically determined lifeline  to the tablet.

Reason suggests that we can expect to see Nokia signing deals with developers to bring Nokia-only games to the Windows Store, too.

And all this on a platform that had long been written off.

There's no guarantee that Nokia's Lumia 2520 will enjoy any more success than Microsoft's range of Surface tablets have mustered to date, of course.

However, the Finnish firm is at least giving itself a fighting chance, attempting to contend with the very same issue mobile game developers deal with every single day: how to stand out in an ever-growing crowd that's increasingly being dominated by just a few, major players.

The next 12 months may prove Microsoft has a lot to learn from its latest conquest when it comes to reaching out to the press and consumers alike. And the surface tablet ?

Would be clear and convincing.

The iPad has a different OS, yet there is no confusion.
Posted 8 years, 8 months ago