Out of options, out of ideas, out of time 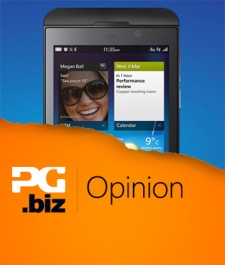 It's a touch ironic that BlackBerry's ever hastening spiral into obscurity is being played out in full view of the public.

Today, the company cancelled its planned $4.7 billion sell off to lead investor Fairfax Holdings  a temporary acquisition that, lets not forget, was only set in motion so that bad news could kept behind closed doors.

And now, just two months after it was revealed, it's all over. Why? Well, to be totally open and honest, no-one seems exactly sure.

Logic would suggest that BlackBerry had  believe it or not  received a better offer, pulling out of a deal that was always designed simply to shore up its business as a result.

Such a theory, however, is ripped apart by the admission that, instead of selling up, BlackBerry is looking to raise the $1 billion it apparently requires through additional funding, with the company that was set to take charge now stumping up a quarter of that cash instead.

As a result, others believe BlackBerry has ditched the buy out because the prospects of anyone buying the newly reformed company after the Fairfax deal had gone through seem slim to non-existent.

That, commentators suggest, was always the plan. Use the Fairfax deal to steady the ship, with the $4.7 billion serving as a handy valuation for prospective suitors.

Those suitors, however, don't appear to exist. It's not hard to understand why, either.

When the now deposed CEO Thorsten Heins came on board at the start of 2012, he had two options: sell up, or try and change the company within and spur a recovery with consumers.

In the end he opted for the latter, and it was clear that, before the product billed as saving the company  BlackBerry 10  had even launched, he knew the writing was on the wall.

Ultimately, looking back almost two years later, it's clear Heins should have set BlackBerry up for sale back in 2012. Though the company's market share was declining just as it is today, much of that was put down the fact it was pushing antiquated handsets running on an out of touch operating system.

Optimists argued that, a BlackBerry powered by a new OS  one capable of taking on iOS, Android and Windows Phone  could turn the company around. That misplaced belief could well have resulted in a successful sale to one of BlackBerry's rivals.

However, by launching BlackBerry 10  a platform that is no better or worse than others already on the market  the Canadian giant has proved such theories to be untrue.

As a platform, BlackBerry 10 is fine. The Z10 seems like a pretty damn decent handset. But it doesn't do anything iPhone, Android et al don't already do, and the focus on chasing app-hungry consumers simply doesn't fit the BlackBerry brand.

So, now BlackBerry stands before us naked  the Emperor's new clothes revealed to be nothing more than a trick of the light and a dose of goodwill from journalists still hankering for a comeback.

It's little wonder companies aren't breaking down BlackBerry's doors with offers left, right and centre, either.

The company is tied to a platform with a minuscule userbase, months after a supposed relaunch designed to catapult it back into competition has fallen flat. Who would want to take on organising yet another relaunch?

Even if a new owner took the steps to ditch BlackBerry 10, what other options are there?

Adopting Android at a time when even the likes of LG and HTC are being pushed aside by the all-conquering Samsung would be utterly foolish, and given Nokia's similar dominance of Windows Phone  a platform that, itself, is only now beginning to find momentum  signing up for Microsoft's OS would be equally fruitless.

It's hard to see what any prospective new owner could hope to gain from BlackBerry aside from stripping it for parts.

The last few months have shown how far the company has fallen and how little traction the brand now has with consumers. BlackBerry is out of moves, lacking strategy and focus and now sinking in the water without a paddle and without a CEO.

Though perhaps that's the one positive nugget of news we can take from today: Thorsten Heins, the man who took a struggling giant and ran it into the ground in 22 months flat, is no more.

I just hope BlackBerry's board didn't have to pay $56 million to do it.