Alive and kicking: The making of Dead Man's Draw 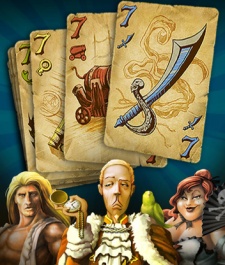 You need only talk to Derek Paxton, vice president of Stardock Entertainment, for the briefest amount of time to realise just what a deep love and understanding of strategy games he has.

Indeed, it's this keen appreciation for the genre that has helped put the US developer on the map.

"My favourite part of strategy games is that moment where you decide to go all in or not," opens Paxton.

"It's when you are considering declaring war, when you move your queen to the middle of the board, when you attack your enemy's piece hoping it is their spy and not a bomb... Dead Man's Draw removes everything but that decision."

And there it is - the missing piece as to why Dead Man's Draw, the firm's latest release for iOS, exists.

For those familiar with Stardock Entertainment, a company known for making immersive strategy games cherished by niche PC gamers for decades, the appearance of Dead Man's Draw on the App Store didn't seem like a natural fit.

It was everything that Stardock wasn't known for. It was bright and flashy, it was low-investment, and - above all else - it was mobile.

"It is everything from a large war game," Paxton tells us, "boiled down to a game that can be played in a few minutes."

Inventing a new card game isnt an easy prospect, and the first challenge in game design according to Paxton was to make it fun.

If you're going off a known design or a formulaic example, this process is easier - but it's decidedly more harrowing when you're building an entirely new sort of card game from scratch.

"You are out in the dark with a flashlight. You suspect there is fun out there, but you have to find it."

As most developers who've been in Paxton's shoes know, this stage is an exhilarating one. When you find a fun mechanic that works, it's easy to feel that you can do anything - but these moments are often fleeting.

"That is a great experience when it works, when you come across unexpected gameplay treasures. But it can be frustrating when you try and try something that sounds like a good idea, but it just isn't fun."

All well and good, but it's time to address the elephant in the cargo hold - how did Stardock decide on pirates?

"For Dead Man's Draw we tried a bunch of different themes: old west, cartoons, fantasy, casino noir... then Leo Li, the lead artist, stopped by my office. It was late on a Friday and we had already spent too much time trying out theme ideas and he asked to try one more in his own time over the weekend.

Expanding from PC games and into the uncharted waters of mobile wasn't an easy journey for the established Stardock, but the change was quite refreshing to Paxton and his team.

"We tend to make games that take years to produce," says Paxton. "So it was really nice to be able to take a small, talented team and produce a game that we could start playing in a few weeks and complete in a few months."

Working with this more nimble team, Stardock was able to a game that looked like "Magic: the Gathering and blackjack had a pirate baby."

When asked how this pirate baby would stand out from the raft of other strategy card games on the App Store, Paxton was direct and to the point - just like Dead Man's Draw.

"There is one core decision for the game: to draw another card or not. But everything on the board influences that decision, making it unique to that game. You can play hundreds of games and never have the same exact decision."

When the dust settled, Dead Man's Draw set sail for the App Store and earned a Silver Award over at Pocket Gamer for its "excellent production values and an intriguing level of depth".

Reflecting on this, Paxton can't help but be satisfied.

"Our top priority for our first mobile title was to show that Stardock can produce great and unique games. Dead Man's Draw did exactly that."

With this launch behind them, and patches planned to add content to the strategy pirate card game already in the hopper, Paxton and Stardock are looking to the future.

"Dead Man's Draw is just the first step in our mobile lineup. We have also announced Hero Busters and Star Trails as our next two mobile titles, and we are having a great time with both of them."

The title and first paragraph say all games must have an ISBN. Later on the report talks about state…