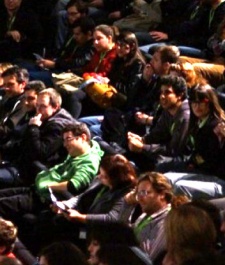 With over 40 speakers  including Professor Richard A. Bartle (the father of modern massive multiplayer online games) and Marcin Iwinski (CEO of CDProjekt) - across six difference sessions ranging from creative to business, GameIS already feels like a mature, international conference  and it only took its organisers two years to get here.

For those of you unable to make the trip to Israel to sample it for yourself, here are our takeaways from 2013's GameIS, complete with predictions as to what 2014 has in store for Israel and beyond.

Israel is on the map

From a country that, traditionally speaking, has had little to offer to the world of games, Israel is rapidly becoming a force to be reckoned with.

Leonard Frankel - head of business development at Plarium, one of the top game design in Israel with top selling titles around the world - delivered the event's opening keynote, giving a review of game industry in general and specifically in Israel.

The highlights? Intel acquisition of Omek Interactive (and more specifically, its motion technology), Apple's takeover of PrimeSense (the company that created the original technology behind Xbox's Kinect), and local outfit Tabtale becoming the seventh top publisher on the iPad (according to App Annie).

Naturally, Frankel also took time out to mention Plarium's own game - Soldiers Inc.- which marked the launch of the most expensive game in Israel, as well as Super Splatters serving as the first Israeli game on Steam and, finally, Facebook's own declaration of the fact that three out of 10 top games on the social network site come from Israel.

The future? Frankel brought his keynote to a close by promising that 2014 is going to be "legen...dary".

While GameIS conference drew in a record of 700 attendees, it was by no mean the only event in the region this year.

One of GameIS' founders and active member Elad Goldstein  or Goldy as he is better known  was keen to detail the other shebangs Israel played hos to in 2013: a total of 25 events took place across the country, including the Global Game Jam that, in 2014, will hit four cities across Israel  two hubs in Tel Aviv, one in Jerusalem and one is Ashkelon.

GGJ 2014 will also see some teams working on games about the Holocaust, a project led by Dudi Peles and Ziv Kitaro. Both are game developers and educators in the field of game design.

The likes of Intel, Google and under other major firms have also hosted hackathons across Israel in 2013, further signifying the country's growing prominence in the world of game dev.

Raymen Legends is huge in Israel

In the evening, just before the main talks, GameIS conducted its sixth annual award ceremony.

One of the top honour, The Golden Psilon for best international game, went to Rayman Legends, which beat out the likes of BioShock Infinite, and the New Tomb Raider.

Yael Hakshurian, another well known figure in the local industry who runs a unique game design program in one of Israel's schools for the gifted, came on stage to hand out the Psilon for best local developers.

FatHead came out on top in the student project category, while best indie game went to The Cave of Lights. The Special Achievement award  handed out by GameIS to the game organisers believe, appropriately, has a 'special' quality  was won by Angry Jew.

Lastly, the Half-Life award  a word play on the idea of a lifetime achievement handed out to people still working in the industry rather than a specific reference to Valve's classic - was awarded to Richard A. Bartle for his work on MMOs and Virtual Worlds.

In all, 76 games were submitted to this year's GameIS awards, representing 210 different developers. The most subscribed categories were those relating to games on Android (24 percent) and online games (22.3 percent), with Apple (15.8 percent) and browser games being (14.5 percent) following closely behind.

Arguably of more interest, however, was the fact that 2.6 percent of the submitted games were developed for Windows 8 and Ouya.

What's more, Nokia also revealed that Windows Phone is gaining traction in Israel, with an augmented reality game for the platform  The Mossad  named after the Israeli secret service and developed by local outfit GreenShpits.
(inforgraphic thanks to Reut Keresh)

In his keynote speech, Professor Richard A. Bartle discussed the idea that social games are increasingly unsocial.

For 30 minutes, Bartle broke down the main problems social games face today, pointing out that there will come a point when gamers come to realise that the repetitive mechanisms many of these titles employ isn't gameplay.

"You can't win in social games, you can't lose in them... Your friends are resources you harvest not people you play with" he said.

So is it all doom and gloom? On the contrary. According to Bartle, at the moment we are watching millions of people who don't see themselves as 'gamers' voluntarily learning what games are and what types of games they might like.

This means that, within a few years, those same 'gamers' will be hungry for more games, expanding the sector's audience.