Speakers who were half-bricking it 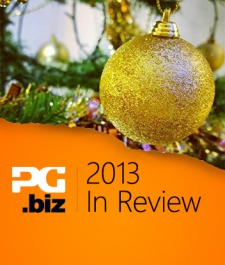 Time was, mobile games conferences were something of a rarity  a special event with something of the feel of a school trip, where the industry's brightest and best would come together and debate the issues over some really nice beef and litres of thick, overly stewed coffee.

In 2013, however, there were almost as many conferences as there were games and  being the ever-keen jet-setters that we are  PocketGamer.biz was at pretty much every single one of them.

Hard task that it was, we've condensed down our top talks from the past 12 months into a handy rundown of the five best picks. And here they are:

It's unlikely Christopher Natsuume, co-founder Boomzap Entertainment, knew the controversy he'd cause when he detailed a recent trip to Ukraine as an illustration of his experience as an indie developer at Game Connection in Paris in December.

Natsuume talked of a prostitute working one of the bars in Kiev, but having somewhat less joy than the others circling the joint. After each knock-back, Natsuume said, she had to had to "compose herself and remove herself from the situation with dignity and move onto the next guy.

"She had to paint her smile back on and move on."

That, Natsuume suggested, was exactly how he felt when circling events and pitching games to publishers  publishers that, he claimed, "never tell you no."

"Instead, they'll always say 'oh, that's interesting, we'll get back to you.'," he said.

Though Natsuume's comments were always likely to raise eyebrows, the folks gathered in the room listening to his anecdote immediately got what he meant. The comparison he was making had no real connection to the sex trade, but rather was focused on how people deal with rejection.

Whether or not developers should be chasing publishers at all, however, is the real debate.

'Small but smart' tips for PR success, courtesy of Cosmocover

Even the most successful games studios struggle with PR  often left as an afterthought, a dirty word, something you do when your game is finished.

Speaking back in February at Casual Connect in Hamburg, however, John Tyrrell - creative director of French-based boutique international PR agency Cosmocover - lifted the lid on some of the secrets of the trade.

"Thinking is highly underrated in terms of anything you do," said Tyrrell.

"Take time out  think about your goals and objectives. Writing a press release at the very start that can actually help you define what you're looking to do, even if you don't release it.

"Also, you need to consider if you have what it takes to do PR. It's not rocket science, but neither is it a walk in the park. Anyone can send a press release out to every journalist under the sun, but will that work? Probably not."

Tyrell went on to expand on those thoughts, broadcasted that day to a room full of eager developers, in a series of 'small but smart PR' columns on PocketGamer.biz, which you can find here.

For every 60 prototypes social game specialist Wooga dreams up, only five ever make it to market worldwide. Why? Because the mobile business is cut throat business, and if you want success, you've got to accept that the majority of games just don't cut the mustard.

"According to our estimates, the value of the App Store market in the last 12 months is $12 billion," detailed Sebastian Kriese, corporate development lead at casual gaming specialist Wooga, during his talk at Game Connection Europe in Paris in December, "but the problem is, it's all hit driven.

"Our estimates suggest less than 0.1 percent of games on the App Store are ever what we would call successful."

So how do you avoid launching failures? Wooga's process involves everything from asking strangers  and, importantly, non-gamers  off the street to take on their titles to soft launching them upon the poor, unsuspecting Canadians.

The trick is, Kriese hinted, listen to your audience. Open yourself up to the idea that scores of your ideas are awful, and don't get attached to games simply because you created them.

How to turn touchscreen controls into an asset, by Lady Shotgun

One of the highlights from this year's Develop in Brighton was the admission by Anna Marsh of Lady Shotgun that, even in the case of some successful games, a lot of mobile studios still haven't got to grips with touchscreen controls yet.

There are simple lessons developers can take from the games that have mastered it, however, as Marsh detailed back in July.

"People tend to think that the way a game feels is like some group of magical elements that somehow just comes together," offered Marsh.

"A lot of the time, what's happening when we touch and feel is subconscious  a lot of Hollywood movies use tricks to tell us what we're going to feel, and it's exactly the same in game design."

You can read Marsh's top 3 tips for designing play for touchscreens here.

How a game that never was almost tore Halfbrick apart

Top of the pile, however, was a talk by Halfbrick COO Luke Muscat at GDC in San Francisco back in March  which also made it into our rundown our the most read stories of the year.

Muscat's topic? A game that never was. A curious subject, you might think, given the success Halfbrick has enjoyed with the games it has released, but one that proved very fruitful  pun intended  for those gathered at the Moscone Center.

Muscat detailed the Australian studio's attempts to deliver a massively multiplayer game, where every player takes charge of a tank, and is assigned a set number of 'action points'.

These points  refuelled every day with one new point  allow players to move across the grid and fire at any opponents in the direct vicinity. Players have the ability to gift action points to others in adjacent squares.

"I thought it would create a bit of excitement," Muscat said. "Anyone who approached you, they may shoot you, they may help you. You just don't know."

However, instead of shooting each other, players teamed up and passed their action points from person to person so one player would have enough points to take out one player on the other side of the grid. In one case, their target was their boss.

Muscat went to talk detail the game in question  Tank Tactics  in a further interview, which you can read here.

An honourable mention surely has to go to King's Tommy Palm for his talk at GDC this year. Well, not actually the talk itself, but rather the queue.

Despite turning up well in advance for Palm's presentation, the room was already full by the time PocketGamer.biz got there.

Our solution on missing out on a potentially hit-winning story? Record a video of the queue instead  a video that proved to be rather popular in its own right.