Mobile in Malmo: Sweden has the political will to succeed in the smartphone race 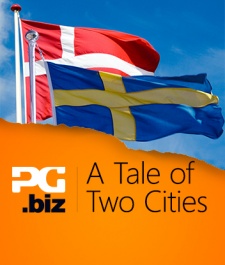 This is the final part in a week long look at mobile development in the cities of Malmö and Copenhagen.

Such has been the growth of the games industry in recent years, most of the major European nations now play host to a trade body or two.

In Sweden, several different organisations have shared this responsibility over the years, but 15 months ago the Swedish Games Industry was formed to shoulder the majority of the industry's interests.

Boasting a membership that's now 70 strong  including the likes of DICE and mobile giant King  developer, publisher and now Swedish Games Industry spokesperson Per Strömbäck sats the organisation was forced into existence thanks to political change at a national level.

"We need a proper relationship with Government. I've had a hunch that we've needed this for years," Strömbäck tells us.

"There was a change in how the ministers wanted to manage this culture policy program and wanted some of the activities to be managed by industry so we had to set something up to work with Government, just as we have a European organisation as well.

"We had to match how the Government is set up."

Throughout this week we have spoken mostly to independent developers in both Malmö and Copenhagen in Denmark. However, according to Strömbäck, it's the big triple-A studios and middleware creators that make Sweden currently the most successful games community in the Nordic region.

"I think we're blessed to have such a diverse community of developers, including tools and services and middleware. They tend to not get as much attention, but they have been really successful," says Strömbäck.

"I think what you need is a good ecosystem with small and large developers. The bigger developers put Sweden on the map and create opportunities for smaller ones. It would be much more of a problem [to have more triple-A than indie] if we did not have international success in both fields.

Credit where it's due?

In the 15 months that Swedish Games Industry has been working with the national Government on behalf of developers across the country, the organisation has garnered a tremendous following for the industry from the media and ministers.

A large part of this is down to the massive success stories of individual Swedish studios. Mojang's Minecraft is seen as one of the international game industry's greatest achievements in recent years and other big developers like DICE continue to be hugely important to Sweden economically.

It's easy to see why the Government wants a hand in the industry.

"I think we've had fantastic recognition in terms of financial success, jobs and exports," argues Strömbäck.

"The business pages give plenty of attention to games. Going back five or six years the attitude was completely different. There were constant motions in parliament about sales of games to minors or banning them outright.

On the other hand, one of the big problems highlighted in our interviews with Malmö's developers is the lack of cultural recognition that games receive in Sweden, despite political and economic recognition of the industry's rapidly growing contribution to the country.

Strömbäck seems less worried than the studios on this subject, but he is willing to admit that more needs to be done to improve the situation, especially now that gaming's economic recognition in Sweden has come about as far as it can for the time being.

"Its fair to say that cultural recognition is not at the same level. We've come as far as you can in terms of economic recognition. Culture is the next thing we're looking at," claims Strömbäck.

"That said, games are in public libraries and museums here already. Also, we have a fantastic event called Dreamhack which is the world's biggest LAN party. The finals from Dreamhack air live on broadcast TV on a Saturday night.

"It would be like the BBC broadcasting eSports prime time on a Saturday."

Events like Dreamhack show that the people of Sweden are willing to embrace video games into their culture, but more encouragement from organisations like Swedish Games Industry is still required.

Developers, the Government and consumers in Sweden certainly seems to be very open to new ideas and ways of thinking. One of the best examples of this is Swedish Games Industry's upcoming gender equality program for gaming which now has Government backing for the first time.

"We have a gender equality equal opportunities program. which we have put into the context of the changing market," Strömbäck explains.

"It used to be that game developers were nerds making games for other nerds. Everyone was part of a subculture. With mobile and social everybody plays games now. That means there needs to be a shift in mindset.

"We need to make the best games for people not like ourselves. Therefore we need more female employees. We have just received Government funding for this project."

This determination to tackle issues like this that others shy away from is one of the reasons the Swedish gaming community it notably different to many of its rivals.

However, there's always room for improvement, and fostering greater relationships between developers in Malmö and those across the Øresund Bridge in Copenhagen in Denmark would definitely be on the list.

Malmö's studios have expressed a great desire to work more closely with the Danes and Strömbäck also believes more can be done in this area, but says there is plenty of work being done with the Danes at the national level already.

"We have always tried to work with Denmark and other Nordic neighbours when we do international events to have Nordic stands rather than one for each country," Strömbäck says.

"It gives us more success stories which raise the profile for Nordic companies at E3, GDC and Gamescom. We have a long history of working together. We also have some trade in education and skills, such as through The IT University in Copenhagen which is where Unity grew from. There's been some academic exchange between this and universities in Malmö."

With the countries working closely together for international recognition there is probably a particular reason why neighbours like Malmö and Copenhagen don't seem to work together. Strömbäck thinks he may have the answer.

"Malmö stands in the shadow of Copenhagen a little. There's maybe a little brother mentality than makes Malmö try extra hard. The ambition level is higher than in many other places," Strömbäck speculates.

"There's been a little bit of exchange between the smaller studios in Copenhagen and Malmo. The developers all know each other. There are only one or two business relationships though, so there is room for more collaboration. The only time we see any rivalry is over staff.

"If senior staff move from one studio to another that can be controversial. Skills are the only ingredient in short supply."

While the relationships at a national level are undoubtedly good, it would appear more needs to be done when it comes to linking up the individual development communities working within the Nordic nations  especially when those communities are just a bridge drive away from each other.

A Tale of Two Cities: How Malmo and Copenhagen are spurring each other to smartphone success