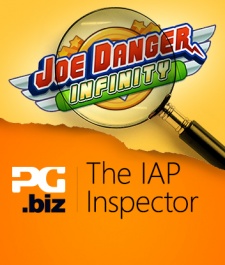 Despite whatever the name led me to believe, Joe Danger Infinity is not an endless runner. Or endless racer.

Instead, it's another iteration of the excellent Joe Danger racing system from the first title - you trundle along an obstacle-laden track and tap to jump, swipe to change lanes, and hold a finger down to duck.

There are two changes to Infinity that separates it from the original - one affects how it looks, the other how it plays.

First, to the aesthetic. Everything's been shrunk down to a Micro Machines level and races take place on surfaces like kitchen table.

Despite the fact that the obstacles are rehashed from the first game, this really makes Infinity very fun and conjures happy memories of playing with toys found in cereal boxes on a carefree Saturday morning.

The other change - to how it plays - is a bit less welcome. While many games rely on fostering a "just one more go" sort of hook for players, Joe Danger Infinity forces it upon players by automatically starting the next level for you.

Think how Netflix auto-cues the next episode of a show you're watching and youll have a good idea of how this works.

Clearly, this establishes a high-pressure tone to Joe Danger Infinity from the outset - a trend which it continues in the IAP department despite its premium price.

If you're a dab hand at the game, you might not ever know that there are consumable boosts (invincibility, coin attractor, or score boost) available for purchase. If you fail a level a few times, however, Infinity takes the opportunity to educate you about the boosts and even gives you a taste of their utility for free.

Outside of these boosts, the only other thing there is to spend on in-game are new characters and vehicles.

In addition to a new look, each upgrade offers plenty of nifty boosts and perks - from ignoring certain obstacles to increasing your overall score.

You can earn these upgrades organically by collecting coins - the sole currency - or you can collect rarer gumball tokens, but if you opt for the gumball route you have no control over which character (if any) you'll receive.

Moreover, the best character in a series - the solid gold one, naturally - can only be earned if you have every other character in the series first.

Comparisons may soon be drawn to a compu gatcha formula, and the presence of a virtual gashapon machine doesn't help matters any, but thankfully it's not that brutal. You just need to collect every character in a series first before you can buy the gold one.

There is one major annoyance in browsing the character store, however - every time you click on a character to see its cost, you're confronted with an annoying pop-up asking if you'd like to buy coins to afford it when you try to click back to the menu.

Here's where Infnity's approach to IAPs really lost me.

There is a social mechanic with leaderboards showing the top scores for each level, but the numbers by the top players are so wildly beyond the reach of what you can earn in a "clean" run (without upgrades) immediately turned me off of buying consumables.

If you're the type of player that enjoys chasing high scores, you might feel differently, but given the simplicity of the stages - especially early on - it's abundantly clear that each of the high scorers earned their place via the character and vehicle upgrades they purchased and not through the skill they possess.

As such, there's really no value to the consumable power-ups. You really have to try to fail a stage, so invincibility's right out, and the coin attractor - while nice - won't tempt you into spending coins on a marginal increase to your score. I have literally no idea why there were included in the game to begin with.

Here, however, it goes one step further and locks certain levels you've cleared behind specific characters or vehicles.

You can play it once, but if you want to grind it for coins or high scores you'll need to wait till you unlock a specific character or spend to buy it.

Thus, there's an artificial sense of addition to / expansion of the gameplay experience here.

If you grow impatient waiting on the gumball machine to give you the character you need to replay a level and you don't feel like grinding the thousands of coins required for it, you might be tempted to spend on it.

Unfortunately, this doesn't really provide you with anything new. Sure, you get the boosts the character or vehicle would normally confer, but you're essentially paying for the chance to replay content you've already experienced.

That's a rather weak hand to play when you're aiming to tempt players into opening their wallets.

Still, each character and vehicle imparts a quantifiable value to the player - and the more robust of these are absolutely required if you care about chasing down high scores.

In terms of raw value, you do get to keep every character and vehicle you unlock and can swap between them freely so there is a nice sense of building up a collection.

There's almost no real value in dropping coins on the consumable power-ups, however, as they won't make a difference in your overall score (unless you buy the tawdry Score Boost) and certainly won't allow you to challenge top-ranked players if you're just starting out.

You can play Joe Danger Infinity without spending on lavish characters or vehicles, certainly, but to go back and replay every level you'll need to warm up to the idea of either being very patient with the gumball machine or spending on certain key characters.

I never really felt compelled to spend on Joe Danger Infinity and the fact that I had to pay to download it made me even less inclined to give into temptation and spend on coins.

Sure, there were some characters that looked fun - but the boosts the provided were almost identical to less desirable characters I'd unlock through the gumball machine. Additionally, each character would cost me around $2 - $5 each, which seems a bit excessive given that I already paid to download the game.

Overall, despite Joe Danger Infinity's design to rush me into the next level, it never fostered the "just one more go" hook to keep my interest - everything about it felt artificial, but it still was a very fun game to play.

I just don't think I'd ever drop hard currency on it.