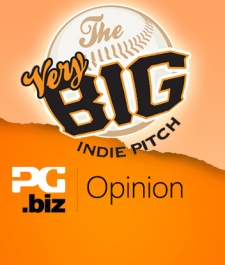 No matter how well you prepare or how rigorously you practice, you can guarantee that things won't necessarily go to plan when you're pitching your game in front of a new audience.

Sitting in on my third Big Indie Pitch  an event organised by Pocket Gamer's publisher Steel Media that allows indies to showcase their games to an audience of journalists, publishers and industry luminaries  you get fairly used to things going wrong.

Often you'll find that, somewhat awkwardly, the developer discovers an unknown (and occasionally game breaking) bug right in the middle of their demo. Equally unnerving is the habit mobile hardware has for breaking down half way through the pitch.

Seeing one or two developers let nerves get the better of them  shaking fingers leading to fumbled virtual button presses  is also a fairly common occurrence, while learning to play the game upside down to ensure the watching huddle has the ideal viewing angle is easier said than done.

In short, there are hurdles aplenty to clear if you're looking to pull off the perfect pitch. Problems are part and parcel of the process.

For this particular games journalist, however, it wasn't the developers or the games that let him down. It was his back.

Having watching 40 odd pitches over the course of 5 or more hours, my spine decided it had enough.

In the early hours of the following morning, I put my back out in my hotel room  soon to become prison  and missed the entire second day of the event our latest Big Indie Pitch was attached to, Pocket Gamer Connects.

This rather painful pause to proceedings wasn't without its benefits, however. Stuck rigidly in my hotel room chair (and later my osteopath's waiting room), I had time to reflect on what I'd seen the day before.

My conclusion? Despite the challenges, despite the increasing fear that there's little chance their game will ever be spotted (let alone downloaded), developers aren't running away from mobile. If anything, they're upping the ante.

Only two games bore any similarity to each other - two tank battlers that, in practice, offered largely different takes on the genre. The rest of the 40 on offer all brought something different to the table  a fact highlighted by the nature of the three winners.

PhotoDash charges players with taking on their friends by snapping photos in quick time. The game sets specific challenges  items to snap or poses to pull in front of the camera  and the first player to submit the image in question wins the round.

In this post Draw Something world, it's a game that has 'hit' written all over it.

Wild Dawn is the kind of platformer that will pick up award nominations left, right and centre.

Its hook  bringing light and life back to a world shrouded in darkness, with flowers blooming in your wake  pays off so beautifully, it's impossible to stop superlatives escaping from your lips when you watch it in action.

Tap Happy Sabotage is the first party game I've seen to truly take advantage of the real estate provided by the large touchscreen displays Windows 8 plays host to  Twister for the modern generation, if you like.

And that was just the winners.

The place to be

As listeners of the Pocket Gamer Podcast will be aware, it takes quite a lot to win me round, yet at the end of an afternoon's worth of pitching, even I had more positive comments about the rush of releases that has been cast before my eyes than negative.

Cheesy as it sounds, Pocket Gamer Connects' Very Big Indie Pitch was a conveyor belt of creativity. While only a select band of pitches appeared to have every element in place, few in number were the titles that were without a spark of some sort to celebrate.

Some games had a solid core that was let down a touch by delivery, while others were polished products that required just a little more ingenuity when it came to the basic concept that had inspired them.

Almost all of the developers that sat down at the event's crowded tables last Monday, however, afternoon did so with an intent on bringing something fresh to the mobile pool.

There was so no talk of being the next Supercell or King. There was no attempt to mimic Cut the Rope or Angry Birds  a wise move, given Rovio was present on the panel.

Rather, the Very Big Indie Pitch highlighted a mobile industry fuelled by ambitious indies keen to ensure the smartphone sector remains the first port of call for games industry innovation.

Few of the developers I encountered will ever earn enough to own a private yacht or retire in their mid-30s, but right now they're part of a movement that's putting the rest of games development to shame.