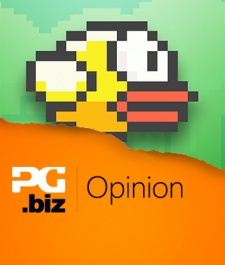 As I sit here writing, I'm cradling my head in one of hands as I come to terms with the fact that, despite repeated attempts, I can't beat my top score on Flappy Bird.

For some context, I should point out that said top score is a meagre  but yet, at the time, triumphant  7.

If I look at my friends leaderboard, I can see that top honours go to Pocket Gamer's production editor Richard Brown, who boasts an unbelievable score of 47.

Still, at least I'm beating fellow PG man Peter Willington on 2, right? I mean, Pete, what's up with you? Can you even play video games? Don't you realise how important Flappy Bird is?

Of course, there's no way of knowing from the scoreboard just how many times Pete has taken on the App Store's latest chart topper, or how he felt when he fell at the game's second hurdle. Did he care? Was he bothered?

Why exactly am I bothered?

From almost every angle you look at it from, Flappy Bird is a mystery.

It's amassed a rush of downloads almost overnight, been bolstered by scores of positive reviews and, if you take a look at Twitter and Facebook at almost any point in the day, is voluntarily being pushed at an ever larger audience, with players eager to post their top score.

On one level, the game's appeal is fairly logical. While it requires an intense amount of concentration, you can successfully play it with just one finger.

Also of note: the game starts almost immediately after you open up the app and  as arcade games of old were the masters of  there's a top score to chase down.

All that said, I had long thought the days when a game as intentionally simple as Flappy Bird could stride to the top of the download charts like Flight Control or Doodle Jump  before it were long behind us.

Looking at Flappy Bird in 2014  and, indeed, witnessing people taking it on while out and about  the whole thing feels like a trip back to 2010.

If, say, a developer had turned up to one of our recent Big Indie Pitch events and thrust a game like Flappy Bird into my hand, chances are I'd have raised a smile, praised the immediacy of it, but then questioned just whether its simplistic approach would really hold gamers' attention for all too long.

Indeed, the man behind Flappy Bird - Vietnamese developer Nguyen Ha Dong  has told TechCrunch the game is garnering between 2-3 million downloads a day, though he's unsure as to how.

Putting its success down to "luck", Flappy Bird is just one of three games Dong has towards the upper echelons of the free charts on the App Store, leading many to call shenanigans.

Rise of the machines?

Though proof is thin on the ground, some have been quick to suggest that Flappy Bird's meteoric rise is as a result of our old friend the bot.

According to Dong, Flappy Bird's growth is largely viral  the game hasn't been supported by ads or any great marketing campaign, nor is it directly cross-promoted in his other games. It has, quite simply, spread through word of mouth.

Others, however, believe its success six months post launch is the hallmark of a game boosted by bot farms  bogus accounts that download a game en masse to push it up the rankings to, hopefully, generate legitimate downloads.

There's no doubting that the majority of Flappy Bird's current audience is real: I only resorted to downloading it myself over the weekend because it was popping up on my social feed on an hourly basis.

But could its initial surge have been artificially generated? Right now, we just don't know.

If, as Dong suggests, Flappy Bird's success has been entirely organic, then it offers both good and bad news for independent developers. It suggests that unknown indies can still jump from relative obscurity one moment to the top of the download charts the next, much like in the App Store's early days.

However, it also means that, when it comes to predicting the next big thing, we  journalists, analysts and the industry at large  are still in the dark, and that success on mobile platforms is more of a lottery today than any other time in the App Store's five year history.

Nevermind my pathetic top score of 7. The fact Flappy Bird has thrown almost everything I thought I knew about mobile up into the air is what's really frustrating.

Does mobile gaming have its Bloodborne?