Opinion: If you want success on Kickstarter, make sure you offer up a proof of concept 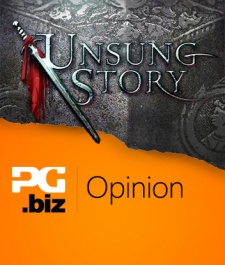 A few weeks back, an intriguing Kickstarter campaign launched that should have been a smash success.

Said Kickstarter was designed to support Unsung Story - a new, episodic tactical RPG, bolstered by a confluence of creative talent from Yasumi Matsuno and Playdek.

Matsuno, for those not familiar, is the man responsible for directing Final Fantasy Tactics, Tactics Ogre: Let Us Cling Together, and the 3DS-exclusive Crimson Shroud. Simply put, his name is impeccable among the tactics and RPG communities.

Indie publisher Playdek, meanwhile, has found great success in bringing card and board games to mobile - so the joint power of the two seemed like a recipe for a Double Fine-level campaign.

Instead, Unsung Story just stumbled into its closing day with a grand total of $660,000 raised - an impressive amount, admittedly, but just 10 percent over its goal of $600,000.

There's really no great mystery as to why Unsung Story didn't soar to higher heights, however. To get an idea for where it could have improved, you need only look at its pitch video.

For a project relying on the name of Matsuno, there was a noticeable lack of the man anywhere in the video below save for armloads of references and a single photograph.

Also, there's something else missing in the seven-minute run - a proof of concept.

No matter how well-intentioned Playdek's campaign was at the outset, it seems like the height of ambition to turn to Kickstarter without mock-up gameplay footage or assets.

Concept art is a good placeholder, but as others have said, you need to have a solid proof of concept to convince potential players that your game is worth investing in.

Playdek eventually addressed this oversight by adding mock-ups of in-game assets to show off how the battle system would work, and it's no coincidence that the late surge in backer dollars followed the posting of these assets.

Despite the overall lack of game footage, Unsung Story still managed to raise well over half-a-million dollars which is a figure the team at Playdek should celebrate.

At least, it would be if the team wasn't confident that Unsung Story could hit higher heights.

But quickly after the campaign's launch, it became apparent that Playdek knew the Kickstarter was in trouble.

After a strong early surge of interest, donations to the campaign began to stall. Playdek issued an update a little over a week in that dropped the stretch goals for the PS Vita and 3DS versions of Unsung Story down to $1 million and $1.5 million (resp.).

Then, on 10 February - four days before the campaign's scheduled end - Playdek announced that Hitoshi Sakimoto would join the Unsung Story project, "regardless on how the Kickstarter turns out".

This was an important step for Playdek to take, as Sakimoto's name commands almost as much clout as Matsuno's does in the community of potential backers.

Before this announcement, Sakimoto's involvement hinged on a stretch goal that was realistically beyond the campaign's reach - a situation that might have scared off as many potential backers as it should have attracted.

The proof's in the proof

As a counterpoint to Unsung Story, another game recently blew the doors off of its Kickstarter goal that bears consideration here.

Although Red Hook Studios' Darkest Dungeon was known to some gaming cognoscenti after a press campaign back in October 2013, it had nowhere near the draw that Unsung Story did with Matsuno's and Sakimoto's names behind it.

What Darkest Dungeon did have, however, was a Kickstarter video that showed a clear proof of concept.

Currently, Red Hook is in the enviable position of having three full weeks left in its Kickstarter campaign to decide what stretch goals to add - knowing full well the game will make it to production regardless future funding.

Ultimately, Unsung Story and Darkest Dungeon are two anecdotal - and very divergent - examples of Kickstarter success, but there's a lesson easily gleaned from both campaigns.

Launching a campaign in 2014 without a firm, established proof of concept cannot be overcome solely with concept art and big names.

Kickstarter backers know that they're taking a gamble in backing a game as there's no guarantee that a project will make it to completion even after its campaign wraps up. As such, they want - and perhaps rightfully demand - an assurance that the game will meet their expectations.

Launching a Kickstarter without this assurance, without a proof of concept, is simply too risky of a prospect for most backers to accept - regardless of what big names are attached to a project.

Thankfully for fans of Matsuno's work, Playdek figured this out before its time on Kickstarter was up.

Stateside: What mobile and console game developers need to learn from each other