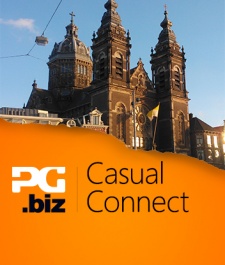 Having taken up residence in the city of Hamburg for the last few years, 2014 saw - in the words of the Dutch delegates in attendance - Casual Connect Europe return "home" to Amsterdam.

That shift 220 odd miles west also brought with it a notable change in tone.

Amsterdam's Casual Connect was much more 'indie friendly', with the showcase of games from small studios no longer hidden away in the depth of the venue, as had been the case in Germany.

In the Dutch capital, indie games were front and centre.

But with this refreshed approach came with it what, on the surface at least, appeared like a reality check.

Whereas the 2013 event  and, indeed, other casual or mobile conferences on the calender  had been dominated by talks proclaiming the prominence of mobile and casual games (and the F2P model they typically tap into), 2014 was peppered with talks where industry luminaries increasingly attempted to look beyond monetisation techniques and whale farming.

References to the likes of Clash of Clans and Candy Crush Saga  typical staples in years gone by  were few in number. King and Supercell are now out of reach, spoken of in almost hushed tones.

The chances of another developer emulating them any time soon look increasingly remote. You might just serve up the next Flappy Bird, though.

Here's our take on the big themes that came to light at Casual Connect Europe in Amsterdam. You can feel free to offer up your own sample in the comment section below.

The star turn during day one of Casual Connect was  perhaps predictably  Peter Molyneux, whose main concern was the thinking (or perhaps lack of thought) behind the free-to-play movement.

Naturally, questions during his fireside chat revolved around EA's recent reimaginging of Dungeon Keeper, which Molyneux claimed simply does not fit the free-to-play model. It's not the idea of paying later on in play that bothers the 22Cans man, however. Rather, it's the way most free-to-play games are currently structured.

"As a gamer, free-to-play crucifies my impatience  it beats me up for being an impatient gamer," said Molyneux.

"What we're doing, however, is smashing consumers over the head with a sledgehammer  we're punishing them for them for wanting things early. We're talking to them like children and we're beating them up by saying 'be patient or pay money'. That's not a delightful mechanic."

Molyneux went on to tell us that, rather than free-to-play, he prefers the term "invest-to-play".

"I feel the first thing I've got to get people to do is to think of playing Godus as not just a game but as a hobby," he said in our follow up interview.

"There's always something to do  there aren't these big loops where you just say 'right, you've clicked on this, you've done three taps, now you have to wait a day'. I think that way of approaching a game doesn't make it feel like a hobby any more.

"It makes me feel like I'm a service provider to the game. I'm not involved  the only decision I take is, do I spend my money now, or do I wait two days? I think that's really crude."

Microsconsoles shouldn't be measured against PS4 or Xbox One

"I can't think of another game, theme or product that has generated so many articles on this website but so palpably failed to deliver, really," detailed I, at the start of 2014.

Looking back at 2013 it's hard to paint an all too rosy picture for microconsoles, but it may be that we  the press, retailers and consumers  are simply looking at them in the wrong way.

While it was easy to line up Ouya and GameStick's somewhat stagnant start on the shop shelves against the blistering debuts of both PS4 and Xbox One, the idea that the two  next-gen consoles and microconsoles  are in competition is phoney.

At least, that was the take of Ouya man Tadhg Kelly during his Casual Connect talk, where he praised take up of Sony and Microsoft's systems and suggested that their respective launches helped focus attention away from what was a difficult first year for the microconsole movement.

"Most consoles are pitched as the IMAX of gaming," Kelly said of the differences between the two markets, also referencing the fact that all three console OEMs "continually exist in a world of near total collapse".

He continued, "A microconsole is a lot of things that aren't that, essentially. It's still a dumb console, but one that's a bit smarter. Ouya pretty much actively encourages users to break it open and mod it  it operates more as a hacker's box rather than just a dumb entertainment channel."

Kelly's take appeared to be that, while Ouya has sold more units than people think, the company is still learning and the market is never likely to reach a console-like scale, and nor should people expect it to.

The biggest problem with microconsoles in 2013 was many developers saw them as an easy way of expanding the audience of their mobile games. Perhaps 2014 will be the year when they realise people don't want to play mobile games on a console, and they'll start developing for it accordingly.

Direct forms of user acquisition may be beyond the budget of the majority of developers, but the days when you can push your game out and sit back and wait for it to take off are over.

Yes, even if you think your game is really, really good.

So, given that going free does little for discoverability and the top of the charts appear an ever-harder nut to crack, the answer from those in the know increasingly appears to be "go social".

Whether that's enabling players to record gameplay and upload to social networks  such as Everyplay or Kamcord  or simply building a strong community through Twitter or official forums, it appears fostering a good relationship with an initial batch of users can pay dividends.

In short, loyal players can quickly become 'sharers'  consumers who, without prompt, repeatedly push your game at their friend base.

"People who are into sharing are also more into discovering online," said Applifier's Jussi Laakkonen during his talk.

"This enables a sort of viral loop  these users are on social media looking at what they're friends are up to, and that leads to discovery. If they play the game and get engaged, they're then going to go on and share it themselves or invite friends to play."

Speaking earlier in the week at our very own Mobile Mixer, Matt Zitzmann - CEO of rival video sharing platform Kamcord  also stressed the importance of building a social networking framework into mobile games.

"What better way to not only show off their high score than to their friends. Facebook click-through rates are 20 percent," he added.

"You want to build your community early on  you don't see movie ads the day it goes live. It's about creating that water cooler effect."

Such a strategy requires an awful amount of planning and, longterm, a fair portion of management, which makes overnight  and seemingly accidental  successes like Flappy Bird all the more frustrating for many developers.

"It wasn't intentional guerilla marketing  it was luck  but you could easily create something with similar characteristics and trigger the same effect. With a game like Flappy Bird, virality kicks in big time.

"And then, the guy promises to pull the app and what happens? He got millions more downloads. Now, I'm not saying this was on purpose, but someone could easily copy that and see a similar boost."

Mobile is maturing. No, really, it is

Whether you've made stacks of money or have been forced to mortgage your house several times over to stay in the game, no-one could deny that the last five or so years in mobile has been damned exciting.

Why? Because the rate at which mobile has grown since the advent of smartphones has been truly astounding, and with that growth has come scores of opportunities to build empires almost overnight.

Leagues of companies that are now household names didn't even exist before the rise of the App Store  we have watched this industry flourish from something of an in-joke to an enviable force in quick time.

But, those days may be over. One stat pushed at Casual Connect in Amsterdam stood out more than any other: the traditional rush of downloads over Christmas we've all got used to is slowing.

"We are seeing a slowdown [at Christmas]," Flurry's Richard Firminger offered in one of the event's stand out talks. Flurry's numbers suggest Christmas downloads had grown by 90 percent in 2012. One year later, that growth had dropped to just 11 percent.

For clarification, that means downloads over Christmas were still up, but at a far slower rate, suggesting we can expect the trend to flatten out or even decline during 2014's festive period.

"It would be fair to say that in the early adopter markets like the USA and Europe  where there's already one or more devices per household - there's no reach cause for lots of downloads because there's no real surge in devices," Firminger continued.

"It all means Christmas is not quite as intense as it used to be."

Firminger's deduction? That, in the west at least, the years of unrestrained growth are gone and mobile as a whole is becoming a mature market. With maturity, however, comes a level of security and stability, so it's not all bad news.

No, we haven't just repeated the name Flappy Bird to aid SEO  though, admittedly, it can't do any harm. Rather, it's because the words 'Flappy Bird' were uttered in almost every single talk any of the team from Pocket Gamer sat down in.

Context varied from celebration to a touch of condemnation, but there was no getting away from the fact that people were both eager to get to grips with the reasons behind its success, and then replicate it.

As anyone with their head screwed on properly attested, however, mirroring Flappy Bird in terms of game design is unlikely to do any good: as Molyneux corrected assessed during his interview with us, "the moment is gone".

What can be learned, however, is the incredible power word-of-mouth can have.

While virality is never guaranteed to boost your revenues and attempting to manage what is often a spontaneous event will likely cause plenty of headaches, being aware that users hold the ultimate power and will, on occasion, shape the market to meet their own desires is almost reassuring.

Whether or not Flappy Bird is to your taste, the overwhelming message from Casual Connect from Amsterdam was that it was the people  and not bots  that pushed it to the top of the charts.