Peter Willington makes his case from the show floor 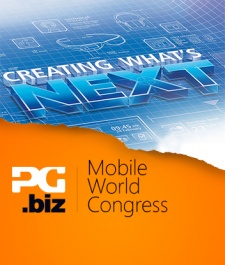 The city of Barcelona is big. Really big.

To help themselves get around quickly through the narrow and claustrophobic streets, its people have augmented themselves with technology for generations.

Today, skateboards are everywhere. Bicycles too. Roller blades are a rare sight, but skaters around the Arc de Triomf are lightning fast - impressing young and old with the speed of their movement. I also saw a Segway, but no one seemed impressed by that.

This phenomenon - of human beings strapping technology to themselves and utilising it to make their lives simpler, easier, and more pleasurable - isn't unique to travel, and it isn't unique to Barcelona.

Every person on the planet does it to some extent, and you could say the fact we use tools to do it is one of the behaviours that distinguishes us from most other animals.

More importantly, using personal tech (in this case, for travel) is brought into stark relief here in Barcelona. That's because Barcelona is very big. Have I mentioned that already?

Coincidentally, what's 'big' in Barcelona right now is Mobile World Congress, and one of the areas the mobile industry seems to be focused on right now is wearable tech.

You can boil down wearables to a few main areas of interest at the moment: watches with displays, fancy pedometers, and glasses that augment your vision. There are more, but the point of this piece is not to list all the types of tech, but instead to ask a simple question: Why hasn't the games industry embraced and led the charge with wearable tech?

All this stuff has been around in basic forms for a long while, but I don't see games companies getting on-board with the idea very quickly.

Certainly most of the tentative steps into this field that are being made by us, are coming from people making and using games to show off what tech can do in an isn't this neat? way, rather than integrating it as part of a compelling game experience.

(There's one exception to this, which I'll touch on later.)

I'm not a games designer, apart from as an occasional hobby, but it strikes me that the benefits of wearables for gaming could potentially be big, perhaps even bigger than lovely Barcelona.

After I saw the Catalonians going about their business, I found a small café, ordered some tapas, and began sketching ideas on a notepad for all the potential uses. This is what I came up with in the time it took to eat some chorizo::

Basic and short playtime games with ad-based monetisation models are the perfect fit for smartwatches.

Let's take something similar to Flappy Bird as the example. Right now smartwatches have a basic input screen, so developers can't implement complicated controls and have a limited amount of space to work within.

You also can't rely on the user having two hands to play the game as the device is strapped to their wrist, so a single input game along the lines of Flappy Bird  or even Nokia's classic Snake - would work brilliantly.

Not only is the screen real estate not obscured, but it's the kind of bite-sized play that you won't mind indulging in when you look to your wrist for the time. Sure, it's not a fortune maker, but it's hardly a substantial investment of money and time to make, ship, and maintain, either.

I reviewed Game of War  Fire Age a little while back on Pocket Gamer. If you can't be bothered to head on over and find out what's it's all about, just know that the main interaction is tapping menus to produce wait timers. It's very simple, very community driven, and very very popular.

It also relies on its players coming back regularly, encouraging them to do so with timers that fire notifications, tightly knit communities helping one another out, constant rewards, and immediate access to the title.

You could recreate that experience and improve upon it with wearables. With Google Glass you can perform basic input functions, which could easily replicate scrolling through menus.

The lack of graphical finery works to the game's advantage here, and players could check in and do their thing in moments, increasing engagement and encouraging them to further invest emotionally and monetarily in the product.

So, what about my second idea?

Picture this: as you walk around the city  Barcelona or otherwise - every step gives you a 1 in 100 chance of getting a free item, such as a health potion.

At the same time as you're walking around, the pedometer is broadcasting on Bluetooth to pick up others also broadcasting, and instantly swapping friend information so that when you return to your home, it can give you more friends to play and battle with.

What's more, you know they're local, encouraging friendships and alliances to form, and increasing engagement with the game.

Yes, you could do all the above, to an extent, with a mobile device, but taking that route has its distinct drawbacks.

Not everyone gets their gaming fix on mobile. A large portion players take on title on iPads and iPods, and these are devices that may well not travel with the person playing all of the time. However, that's a criticism that can't be laid at the door of either watches or glasses.

Unless you enjoy being half blind and not being able to tell the time, that is, which would probably render you stumbling around like a bit of an idiot. (Much like me taking my first steps in Barcelona, to be honest.)

Anyway, even if a developer was to push out such a game on mobile, many people disable Bluetooth and other sharing functionality. There are a myriad of reasons as to why, but most come down to conserving previous battery life, and privacy issues.

A wearable is more likely to have a battery that lasts longer, and use technology that is low consumption. It's also unlikely you'll store a lot of data on a wearable, certainly most devices at the moment are rather one-way.

Wearables undoubtedly have their limits as far as gameplay goes, but we can't ignore the strengths, either; increased engagement through ease of access, a device that is always with the player for a second, super simple augmented reality and, for want of a better phrase, the 'gamification of the mundane'.

Like I say, I'm not a game designer. I imagine you smart people can think of a lot more.

So why hasn't the industry been pouring resources into games and game experiences on these new platforms thus far?

The reasons are straightforward, but dwindling.

The major one is, of course, the current lack of consumer penetration. Here at Mobile World Congress, you'll find plenty of people willing to bet smartwatches will be the first big wearable 'hit', as the benefits and use cases for it are obvious to all. But the general public isn't interested in shelling out at the moment.

The Pebble was popular on Kickstarter for a while, but it still represents a minor market, and the big tech companies are struggling to land any successes in this field. The success of games on mobile is partly due to the purchase of a phone being a necessity, and games stealthing their way in as a side product.

If the person making the game has to make the hardware, then that becomes prohibitively expensive for almost every company. I say almost, because the company that seems to have the most interesting experiments does make its own hardware: Nintendo.

Back on the Nintendo DS, Nintendo built in a pedometer to Pokemon Soul Silver/Heart Gold that would count the number of steps they took, and this translated into more experience for the virtual monsters.

It was great: a use of simple technology that kept players thinking about the game, and sharing their experiences with their friends, and, perhaps more excitingly, it was making gamers exercise.

Nintendo has explained that health will be a third platform for its strategy moving forward, and wearables will eventually be a part of that. Indeed, Nintendo's successes with Wii Fit prove that it has the capacity to make this a profitable business, even when it requires in-house tech.

If Mobile World Congress is any indication, then wearables are here to stay, and represent an opportunity for pioneering game developers to be the first on a new platform for traditional games, companion apps, and gamifying personal health, and the benefits for doing so, for all involved, could be big.

Heading to Mobile World Congress? Come drink with iDreamSky and Paymentwall at our Mobile Mixer

Why Malaysia is looking to supercharge its ICT sector

You just have to be alive
Posted 8 years, 3 months ago

Reply
James Coote
Wearable implies outdoors and real world, whereas most games are about escaping to another world.

We probably need to completely throw away any previous thinking when designing games for wearable devices. The problem is, most developers make games based on ones they've played before. Same issue afflicts Wii-U and 2nd screen.
Posted 8 years, 3 months ago