The making of Tengami 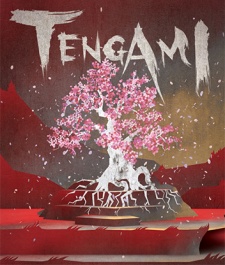 "The game industry teaches you what a game should be, because mainstream experiences are extremely similar.

"It's not the audience's fault, developers have set these expectations over the past 30 to 40 years. So it's no wonder that people are kind of trained: this is a video game, this is how you work out whether it's a good video game. They start to expect such things."

These are the words of Jennifer Schneidereit, co-founder of British studio Nyamyam. In 2010, alongside Phil Tossell and Ryo Agarie, Schneidereit set out to confound the expectations of 'core' gamers and bring fresh ideas to the industry.

The first fruit from this mission is Nyamyam's debut title Tengami - an inventive adventure game played out in a gorgeous, Japanese pop-up book world.

In our latest making of, Schneidereit and Tossell describe their struggle to fulfil that vision and bring Tengami to life.

Schneidereit, Tossell and Agarie met while working for Rare on the Xbox 360 title, Kinect Sports. The trio had discussed setting up their own studio for some time, but jumping ship in late 2010 brought with it mixed feelings, especially for Tossell.

Tossell had been at Rare for most of his working life, starting out on Diddy Kong Racing for Nintendo 64 in 1996.

"Rare was basically my life for 14 years," he says. "Leaving all that behind was a real shock for me. Just sitting in the Nyamyam office on that first day was very liberating, but incredibly scary.

"It was pretty much - what are we gonna do and what is the company gonna stand for? And what kind of games are we going to make?"

Between them, they laid out a plan. "We were like - okay so we're just three people now," says Schneidereit.

"So let's use this smallness and agility to try and see what different kinds of games we can make. Games that nobody else has made before, that are at the edge of what the 'core' game audience is expecting.

"We really wanted to take this newfound freedom to just go a bit wild with it and be bolder with design decisions. And just experiment with a bunch of things."

The result of these experiments was a pop-up book concept - the idea that Nyamyam could make a game built around transforming environments. But faking it was never an option. If the digital pop-ups were going to work, they had to be constructed in a way that would work with paper.

"When we were initially researching it, it was a struggle to find anything that explained very clearly how you actually made pop-ups," explains Tossell. "But we were lucky enough find a book by a guy called Duncan Birmingham.

"Duncan wrote a book that very systematically breaks down the rules of fold types and how you actually construct pop-ups. For me as a programmer, it gave me a basis to build the tools and work out the mathematics that allowed us to construct pop-ups in the game.

"We contacted Duncan because we were so thankful, and he invited us to his house. He's got the most amazing collection of pop-up books. Like hundreds and hundreds. We spent the whole day there just looking through his library.

"Some of them were really old and that was fascinating for us, seeing all the different ways you could use pop-ups to make interactive experiences."

With the concept in place, along with the knowledge gained from Duncan Birmingham, Nyamyam's attentions turned to gameplay, something that introduced a whole new set of challenges.

"This initial concept for the game was a fast-paced platformer with a very acrobatic ninja, and you would create pop-up platforms for the character to progress," says Schneidereit. "It was basically a 2D platformer."

"I don't even know why we did that now," says Tossell. "Maybe it was because Jennifer had made action games before" [prior to Rare, Jennifer Schneidereit worked at Acquire, best known for the Tenchu, Way of the Samurai and Shinobido series]. "So we were like 'let's make a ninja game, that will be cool.'

"It was only after a while that we started to realise that it wasn't working. We were about a year into the project and we were having a crisis. We were doing it on our own money and we were already a year in, and we didn't have anything substantial to show for it.

"So we had to sit down again and look at it all from scratch, go backward."

The key was to move away from a purely mechanics-based approach. "Initially when people see the folding thing, they imagine that you can do a lot more mechanics-based puzzles than are actually possible," says Tossell.

"The way pop-ups work, the folding is quite unpredictable and difficult to use in that way. So we realised that a lot of it was going to be about an overall experience of adventuring through a pop-up world and the feeling you get from interacting and playing with the pop-ups. So that's what we focused on.

"We started to make prototype videos of possible gameplay," adds Schneidereit. "There was one puzzle where you have three cards next to each other and the character has to make his way through a rock landscape.

"Those were the best ones," says Tossell, "where it was like making a path by manipulating pop-ups in sequence to create different pathways. Some of the later puzzles, where we hide things between the folds, are as much about observation as mechanics.

"We definitely decided to focus in on a slower experience that was more about the enjoyment of the experience of the pop-up world, as well as the physical mechanics of actually solving puzzles.

Alongside the pop-ups, the most immediately striking element of Tengami is its visuals, which represent a gorgeous, textural Japanese world of cherry blossom and ancient temples. Tossell and Schneidereit say creating the arresting style was a difficult process.

"We spent over a year iterating through various ideas," explains Tossell. "I mean, we had a long list of concepts, of different possible stylings that we could do. And it just kind of slowly converged on what we ended up with.

"We started with the idea that most pop-up books tend to be for children. They have this kind of illustrated style that's very colourful and a little bit childish, I guess. And we knew we didn't want something like that.

"We wanted something that was more mature and subtle, that showed off the simple beauty of Japanese paper.

"Japanese paper is a whole area in itself. There's so many different styles to it. There's these kind of very bright colourful ones, with very distinct patterns. And there's ones that are very organic and natural. And we looked at both, all these different styles, before eventually settling on Tengami's more subtle, natural look."

"It's a very collaborative and iterative process," adds Schneidereit. "It's also very time-consuming. That's partly why the game took so long, because creating something from pop-up is so restrictive."

As Nyamyam wrestled with the realities of making Tengami, development stretched into a third year and the self-funded studio's money was running out.

"Some people don't realise how much of a sacrifice it is," says Tossell. "By the time I finished at Rare, I was in a position as director of gameplay. It was a very comfortable position for me.

"To give that all up and go back to essentially being a student, having to cut back, having to sell my car, having to strictly budget while paying all the up-front development costs. And then do that for three years, it was terrifying sometimes.

"You have to have complete faith in what you're doing. Of course there's always months of doubt. But that's when you need to support each other. You kinda need to mutually encourage each other and help each other, either financially or emotionally. Whatever you need to do to get the game done. You become like family to each other, really."

"I think it's also important to keep in mind what your goal is," says Schneidereit.

"Our goal was never to be the next big indie hit. People look at like Fez and Braid, games that made millions. But that was never our goal. We just wanted to make a game that we love. Something that was very unique and original, something that nobody else has done before.

"It's important to know what you are expecting from the game that you are making. Because if we had made it with stars in our eyes, thinking that we're going to be millionaires, then we wouldn't have made it through the three years. You need to be realistic, but also have absolute love and passion for what you're doing."

Tengami finally launched on iOS in February 2014 and while Schneidereit says the game hasn't quite sold the numbers needed to recoup expenses, it's "very, very close."

The upcoming Wii U, PC and Mac release of the game, along with possible PS Vita and Android versions, should ensure Nyamyam turn a profit.

"We definitely made our peace early on that the game wasn't going to be for everybody," says Tossell.

"And we were okay with that. When we got mixed reviews, y'know, some people didn't get it. Whenever you make something it always hurts a bit when you get harsh criticism, but we did kind of expect that."

"But we've had so many older people, even people that have never played a game before in their life, say 'I saw Tengami in the App Store. It looked really interesting. I downloaded it and absolutely loved it. When are you going to make more?'

"It's a fantastic feeling. Being able to give people an experience they've never had before. That is the ultimate, as a game creator. It's the best thing that can happen."