The making of Disco Zoo

How Milkbag learned from Tiny Tower 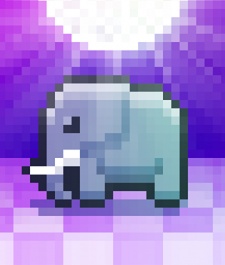 Have you seen the latest attraction on the App Store?

Disco Zoo has opened up its gates to the gaming public, and its potent medley of pixelated animals dancing across the screen is proving to be quite a hit.

Just like the real life menagerie it attempts to mimic, people of all ages are flocking to the game, gazing at the wildlife encapsulated within. Indeed, Disco Zoo has amassed 1.5 million downloads to date  not a bad start for Milkbag Games' debut release.

Though, things could have turned out quite differently. As detailed by Milkbag in this, our latest making of feature, Disco Zoo was initially planned to launch later down the line.

Before beginning work on the game, Milkbag had started on another title  Snow Siege  before it was eventually postponed to facilitate Disco Zoo's rise.

The studio itself is comprised of two members, Matt Rix and Owen Goss, who are the company's co-founders. Both already had experience with working on iOS games before Disco Zoo saw the light of day, with their collective library including past hits such as Trainyard and Finger Tied.

Though it would eventually rise above in on the studio's pecking order, the idea behind Disco Zoo actually came to the duo while working on Snow Siege. The latter featured a minigame where the player had to dig in the snow to uncover presents.

"While we were coding that minigame, we realised that it would actually work as the basic mechanic for a simple game about rescuing animals," recalls Rix.

Disco Zoo, then, had something of a rolling start, with much of the work used to lay out Snow Siege finding a new home in the developer's new project. As a result, Disco Zoo's development time was comparatively brief.

In fact, the core of the game was completed after just three weeks of development, with the rest of the time spent polishing and refining.

When it came to the game's launch, Disco Zoo was picked up by NimbleBit  a relationship that was as logical as it was comfortable, given the nature of the the publisher's previous hits.

"The game was published by NimbelBit, and actually feels a lot like a NimbelBit game,"say Rix. "But the funny thing is, [NimbleBit] didn't even know it existed until a large amount of the core gameplay and art had already been done.

"I think because of the fact we wanted to make a cute free-to-play game with pixel art, the game naturally felt similar to [NimbleBit's]."

That pixel art, though familiar to any NimbleBit fans, actually came about as a result of a solution to a problem. With so many animals on the planet, Disco Zoo's simplified visuals made the task of digitising them (like a virtual Noah) far simpler.

Likewise, Milkbag's decision to go free-to-play with Disco Zoo was also one made before NimbleBit was on the radar.

"We knew we wanted to make a simple F2P game, so everything else kind of came out of that,"says Rix. "At first, we tried going with a 'coin-only' economy, but it was just creating too many issues with balancing, so we ended up adding 'discobux' as the 'hard' currency."

Indeed, the fact that Disco Zoo so readily fits into NimbleBit's approach despite the publisher's lack of involvement in the game's early stages is one of the key takeaways pushed by Rix. Though it's not exactly a coincidence.

"We were definitely inspired by NimbleBit's other games, especially Tiny Tower," admits Rix. "Which also explains why the game is so similar to their games. We were also inspired by Cookie Clicker  the idea of gradually getting upgrades and increasing an ever-present 'coins-per-minute' number."

Another element Milkbag absorbed from Tiny Tower was "the idea of delighting players" - layering in snippets of dialogue and injecting charm into play to keep people engaged.

But Tiny Tower isn't the only game critics have compared Disco Zoo too. The way the player uncovers animals in the game's animal rescuing minigame has sparked more than a few comparisons to the board game Battleship, though  in this case  the similarities really are an accident.

"We didn't realise it was so similar to Battleship until after we'd already created it and shown it to people," says Rix. "The actual creation process was much more organic and iterative."

Outside of the minigame, the game's aesthetic evokes memories of simulation games, like Theme Park, scrolling between the attractions admiring the characterful visuals. Disco Zoo is intentionally much less complex than those games, however.

"We wanted to make a game that was simple and straightforward as possible," says Rix. "There are lots of complex, management-style F2P games out there, but we felt that there weren't a whole lot that were super easy to pick up like Disco Zoo.

"We wanted something where after five minutes of playing , you already understood exactly how the game works and what you need to do to progress."

The player's ultimate goal is to save as many animals as possible, which in turn creates more profit for their zoo  as long as the animals are awake, that is. And how do you keep animals awake? A inter-species rave, obviously.

"We originally were going to have you feeding animals to keep them earning money, but then we realised it would seem cruel if you left your animals unfed for too long," says Rix.

"The idea of animals dancing all the time seemed fun and gave us a great theme for the game. We also use the discos as an inflation-proof bux-to-coins converter, through 'rushing' the disco.

"This means that the rate of coins you get for a certain number of bux perfectly scales with how good your zoo is, which is unlike most other bux-to-coins conversion systems."

When it comes to free-to-plau, Milkbag is open and honest regarding ethical concerns surrounding the model, especially where children are involved.

"As a parent myself, I think part of it comes down to teaching kids and setting the right expectations,"says Rix. "Lots of thing s in life work similarly to free-to-play games. For example, most kids have a few lego sets, but they also have to realise they can't have every Lego set they want.

"Sometimes I play DragonVale with my three year old son, and he already understands the idea that there are some dragons that are too expensive to buy. I think if he understands that, then so can most kids."

Whether every parent out there takes the time to educate their children about spending in play is a debate that, no doubt, will continue to rage across the web.

As far as Milkbag is concerned, however, it has a duty to look into implementing modes that reduce the risk of accidental spending.

"In the next update of Disco Zoo, we've added a 'toddler mode' option  for free  that disables all of the IAP buttons, advertisements, etc. That way you can give your kid the iPad and be confident that they won't accidentally cause any iTunes popups to open, or anything like that," details Rix.

It's refreshing to see a developer that stands to gain so much from free-to-play is willing to take on the associated responsibility for the activities of its audience, but ethical issues aren't the only concern when working on a free-to-play game.

Sometimes, when the game's sole purpose is to generate money, the 'game' itself can be found wanting. Players don't like waiting around.

"It can [be tedious], but we also added the one minute disco intentionally to alleviate that concern,"admits Rix. "You can spend one Discobux immediately to wake up all your animals at once. The idea behind all labour-based games like this, is that you need people to do some work that seems 'grindy' because it makes the rewards feel more satisfying."

That reward varies from player to player, but it's human nature to enjoy watching something grow and flourish. It's a vital part of game design no matter what the genre or payment model. People strive for improvement, and that's also Milkbag's current focus: improving Disco Zoo.

"For now we'll be doing more updates to Disco Zoo," says Rix. "We're not sure exactly what we're going to add, but I think we'll probably add a late-game system that gives the game a bit more strategic depth and replayability.

"The game can be 100 percent completed in under two weeks, so we need to add stuff to keep people coming back.

"One day we might also get back to Snow Siege, but I think we're both fine taking a break from that game."