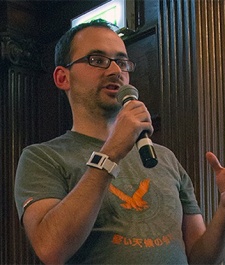 PocketGamer.biz doesn't tend to cover PC or console games  why would it?

Any pocket big enough for even the most modest laptop would be outlandishly large and obscenely impractical to keep change in.

But yet here I am about to talk about what we're doing with Salvaged - a brand new PC/console game for the big screen in your life which we're currently working hard on here at Opposable Games.

And now you're asking yourself why PocketGamer.biz is breaking its self-imposed exile from "full-sized" game coverage for this plucky Bristol-based start-up, when there are a host of big budget uber-hits and fascinating indie nuggets on those platforms to consider, which is a perfectly fair question.

The answer is pretty simple, because for everything that makes Salvaged a big screen game, it wouldn't and couldn't exist without your smartphone or tablet.

Here at Opposable Games, we were founded largely to explore new ways of connecting players and devices together.

Our first game, Clockwork Racers, recreated the 90s multiplayer antics of games like Micro Machines wherever you happened to be, provided you all had an iPhone.

We saw first-hand how players engaged with the concept, but we knew we had to expand both our technical and our creative thinking.

We built on the technology of Clockwork Racers to develop and create One Touch Connect  initially so we could connect Apple and Android users together, but then over time to loop in PCs and Macs as well (and in the future as many other platforms as we can get our hands on).

Suddenly we had the ability not just to connect local handheld players together, but to network phones and tablets with your desktop for massively enhancing the single player experience, and that gave us an idea.

There is a trend for "second-screen" content at the moment: Grand Theft Auto V, Battlefield 4, the forthcoming Watch_Dogs. All these games present players with the opportunity to augment their game by playing along on a connected smart device.

However in most cases it's a footnote, another technical box tick, impressive to show off to shareholders on stage at E3, but at best an optional extra for the end consumer.

For Salvaged we take a more bullish approach.

Salvaged is a unique new game experience which puts you in the shoes of the commander of a star ship salvage crew. You use your mobile device as a controller for the game, relaying commands to your team and watching their views as your orders play out in real-time on your PC or console.

Crucially this isn't a second-screen game or a companion app, the game has been designed from the ground up with dual-screen play as a deep and underlying part of the game as a whole. This isn't the lip-service of SmartGlass, this is true multi-screen gameplay.

You don't have to be a forensically trained web archivist to find amongst these pages proclamations about the rise of mobile, the death of premium games, or the extinction of the console as we know it.

But the industry thrives not in a dog-eat-dog battle to the death, but on the steady evolution and incorporation of new technology, design, and business opportunities.

We know that a high proportion of gamers own smartphones or tablets, we know that that there are a tonne of things that mobile games often do better than the traditional home-based gaming counterparts, but we also know that when gamers get home they are still engaging in huge numbers with a vast array of PC and console games.

And we want to have it all. We want to combine the opportunities in control presented by having a powerful, accurate multi-touch screen with the massive power, fidelity, and immersion of a big screen game.

Salvaged does that, and not only that, it is a game that feels different, that feels fresh, but yet feels completely natural; and that's only possible because of how you play the game.

Is the game a big screen game with a mobile app as an integral part? Or is it a mobile game using your PC or console as an additional display? Yes to both no to both it doesn't actually matter any more.

We're building a game for anyone who cares to play it, and offering a brand new experience to all of them  regardless of the contents or the size of their pockets.

James Parker is Design Director at Opposable Games, a team that specialises in connecting people, devices, and platforms.