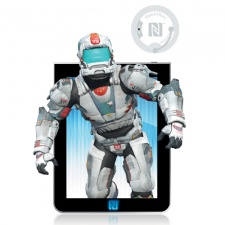 SMARTRAC is the largest global RFID and NFC tag and inlay manufacturer. As a principal member of the NFC Forum, SMARTRAC has extensive experience working with all major IC suppliers.

We partner with electronics, entertainment, and toy manufacturers and creators to deliver NFC-enabled learning and gaming experiences that blend the physical and virtual worlds.

In comic books and fantasy novels, invisibility gives superheroes an extra edge. These characters are able to jump into the heart of the action, gathering valuable intelligence, lending a helping hand to their visible compatriots, and pushing events to a winning conclusion.

Iron Man, Sue Storm, and Violet Incredible are just a few of the many famous fictional heroes who use their ability to disappear as a strategic advantage.

So it is with NFC technology.

Embedded in smartphones everywhere, NFC inlays aren't readily apparent to consumers but provide them with unique pairing and sharing capabilities. These superpowers enable richer multi-player experiences and link the physical and virtual worlds in exciting ways your customers will clearly see and adore.

The future is mobile

So why is this important? Mobile gaming is big business. In 2013, this industry notched an estimated $12.3 billion in annual sales and is on a growth tear, expanding 35 percent each year. Packaged computer games and consoles, on the other hand, experienced sales decreases of 7 percent and 1 percent, respectively.

Electronics manufacturers know that they need to create new reasons for users to link physical devices, such as consoles, and online games together to protect their revenue base.

Fortunately, there's more than hope, there's data: Internet users are increasingly using multiple devices to play their games. In mobile gaming, it's all about screen time.

Gaming is for everyone

And mobile gaming is everywhere. Globally, there are 500 million players, and 175 million have already become paying customers.

Gone is the stereotype of the male teenager loner. Gaming is skewing older: today's big spenders on gaming have an average age of 35 and are almost as likely to be women as men (46 percent to 54 percent).

They're also social: 62 percent of all gamers play with others, either in-person or online. It's no wonder game producers are pouring billions into creating rich multimedia experiences that can be accessed across platforms and target users across geographies, ethnicities, genders, and age groups.

It's a family thing

Mobile gaming has also become an integral part of family entertainment. The reasons why?

Games are lower cost; can be used indefinitely; and engage all members, from the youngest to the oldest, in interactive experiences. As a consequence, families view them as a better value than one-shot, expensive concerts and movies.

Gaming is on the go. Some 345 million users already have an NFC-enabled game controller either on or near their person: It's called the smartphone. By 2017, the number will be 1.6 billion, setting the stage for a global games revolution.

And the financial model is already in place: Smartphone and tablet users already allocate two thirds of their online purchases to games!

Add NFC to your business strategy

So why should you integrate NFC into your mobile gaming plans? It turns out that invisibility is just the first of many superpowers this technology has in its arsenal. Other gifts include:

NFC technology makes pairing and sharing easy and convenient. NFC stickers and inlays can be inserted in Bluetooth® headsets, game controllers and consoles, internet-enabled TVs, and Wi-Fi routers, as well as physical toys. Players can link all of these items and use them in gameplay simply by tapping them together.

They can share content, such as games, photos, and videos, the same way. There is no manual setup and no interference from other internet-enabled devices, since NFC uses proximity to exceptional advantage. With NFC technology, it truly is all fun and games.

NFC inlays can also help to link physical items, such as toys, board games, and books, to online worlds. These items can be used to extend and enrich play by adding new characters or capabilities to games.

Users simply place NFC-enabled toys on consoles or devices to access new aptitudes. NFC technology can also be used to turn on race cars and helicopters: Players use their smartphones as controllers to move the toys. And the latest NFC tag features, such as the ability to activate sensors, LED lights, and sounds, are sure to enhance gamers' audiovisual experiences.

Companies such as Activision, Disney, and Pokémon are leading the way with integrated toy and mobile game offerings. With $2 billion in lifetime revenues, Activision's Skylanders game has ably proven the power of this business model. Players have to buy multiple NFC-enabled toy figures to use them in games such as Spyro's Adventure.

Innovative companies such as Calm Island, with its Badanamu series, use NFC technology to enable interactive learning experiences for young children. These young students use small, soft NFC-powered toys to communicate electronically with mobile devices by reading online storybooks at home or participating in multi-player games at school.

These four companies have achieved significant success using NFC-enhanced game consoles. As we've demonstrated in this editorial, we believe that these brand leaders and others will now begin leveraging NFC smartphones as game controllers in both new and existing product lines. With their portability, omnipresence, and ability to enrich mobile gaming experiences, NFC-enabled smartphones are just too powerful to ignore.

But like any superhero, NFC technology is here to save the day. As such, it's prepared to relinquish its gift of invisibility for the greater good. We believe that you'll increasingly see the N-Mark, the NFC Forum's touchpoint symbol, on new devices, games, and toys, alerting customers to their capabilities.

If you've caught a vision for how NFC technology can help you grow your business, then it's time to move fast. The industry is constantly changing, and first movers will have the greatest advantage for capturing consumers' attention and a large percentage of the walletshare allocated to electronics and online entertainment.

When it comes to mobile entertainment, NFC demonstrates that it's best to have a superhero on your side if you truly want to win. As your customers use NFC technology to tap and play, they'll also pay.

Statistics cited in this article came from the Entertainment Software Association; Cisco, as reported by BusinessInsider; NewZoo; and GameIndustryBiz.com.