Twist and shout: The making of Blek 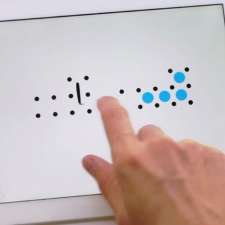 Blek is a game about expression.

Although a puzzler at heart, the game requires the player to trace a line on the touchscreen to take out set targets and avoid obstacles in their path. The line itself then comes to life, looping and twisting around the screen, creating the kind of freeform set up where no two solutions are the same.

Indeed, it's this adaptable, personal approach that seems to have made Blek appealing to a growing mobile audience.

Coming from humble beginnings, Blek currently sits at over one million downloads - not bad for a premium game developed over six months by two brothers.

Denis Mikan and his brother, Davor, both have degrees in computer programming, although they both focused on different things.

Davor - the creative force behind Blek, who developed the game singlehandedly in Unity - is mostly interested in sound, creating software algorithms for sound transformation and composition. His music is published by the media-label Crónica.

On the other side of the team, programmer Denis has both written and published many short stories, as well as a German novel called "Emil". It's fair to say creativity isn't in short supply in the Mikan family.

Fitting, then, that the initial concept behind Blek was a desire to take an old formula and spice it up for the modern mobile era. The brothers began brainstorming just how they could translate Nokia's classic Snake to touchscreen devices.

"At the same time, my brother was reading a book by the Japanese poet Matsuo Bashō, which contains prints of ink drawings and calligraphy," says Denis Mikan. "This was his main inspiration, as one day he came up with the concept of a line representing an idea that springs to life after it has been drawn.

"Also we’ve been influenced by the art of several game creators generally - Patrick Smith, Adam Saltsman, Zach Gage, Jenova Chen, to name just a few - but we don’t feel that other games made direct impact on the design of Blek."

The Mikan brothers aren't afraid to talk about other games they like, or what it is that makes them exceptional, under that caveat that none of them directly influenced Blek. The game is as unique as each player's solution to its many puzzles.

"I believe [other games are] all taking part on our journey, but I can’t really point to a single one and say something like, 'That’s how Windosill influenced one or the other step in the process,'" continues Denis. "In general, all ideas of videogames as toys, and games as meaningful experiences attract our attention."

Blek's fresh approach is impressive enough, but even more so when you consider the time scale for development and the fact it was the brothers' first game together. The pair even built the game's website and produced its trailer.

We had never worked together before and we wanted to check if we could do something worthwhile.

"We had never worked together before and we wanted to check if we could do something worthwhile, having fun while making it," continues Denis.

"My brother used to make little Flash games for a living. Then he saw some potential in producing digital toys, but the companies he worked for didn’t want to take risks. Once he told me about it, we started talking about the idea - and one year later, Blek was ready for the App Store submission."

From the initial draft of the idea, the page came alive and, like the game itself, started to form its own shape. The brothers claim, however, Blek never underwent any radical changes during development, always staying true to the pair's initial goals.

"Soon after we started with the development process, we had a good idea of where we wanted to go with the game," recalls Denis. "What took a lot of iterations - and a few months of work - was the level design.

"Our friends helped us with advice and they did a lot of testing, so we were able to make and finish the level design which was the most important part; and also the hardest one."

The main challenge in designing the levels, was in keeping the player engaged over 60 of them, by introducing new twists on the formula each time: some levels require big, looping coils; some require a short, scatty slalom to avoid the minefield of obstacles - represented by black circles - placed within them.

"We tried to encourage players to play with the mechanics, to explore the system," says Denis.

"Ultimately, with the design, we wanted to imply that there isn't a single approach which will 'beat the game", on the contrary, there are many of them and a good meta strategy could be not to rely on previously elaborated methods but to often change the strategy by altering the way you look at the game."

Indeed, sometimes a drawn shape will snake across the screen and bounce back in ways the player doesn't expect. It isn't just shape Blek takes into account, either - speed and angle are also accounted for.

First, the duo asked themselves how to make the speed of the gesture matter. The solution was introducing a new type of target, which rotates and detonates upon impact, firing off little shrapnel balls. This made timing crucial for the player. Portals were also added to mix things up.

"We wanted to reward playfulness and experimentation," adds Denis.

There were some experimental things left screwed up in the bin, however.

"When you draw a closed shape in Blek, it becomes a static loop - the gesture does not change its position with every repetition and therefore you can’t solve a level with this kind of line.

"Initially, we thought to let the game respond in a different way when the player draws things like a triangle, an endless sign or a heart. We had several ideas, but only the circle found its way into the game. The other ideas fell out mainly because they didn’t seem justifiable from the programing-time or game-experience-benefit perspective.

"But we are not sure if this was the right decision. Imagine the experience of this girl [see video below] if the game had responded in some way after she drew a heart."

The controls, which capture speed, hesitancy and shape were relatively simple to program for Davor Mikan.

"Gesture looping is pretty simple to program and it’s something Davor often uses in order to transform sound in real time," says Denis. "Algorithms like these are part of his vocabulary and they have been around for quite a while now. To my knowledge, Golan Levin was the first one who came up with gesture-looping – long time before the iPhone even existed."

You can see - or, more aptly, hear - Davor's sound design chops in Blek, too. There's an otherworldly feel to the sound design, especially in the human-like groan that signals failure when the player hits a black circle. The sounds used, however, are far from alien.

"We used sine waves and noise - the most simple and the most complex sound on earth," Denis concludes.

"And the human voice when the line hits the black dot are excerpts from 'Yamaguchi Mouthpiece 1', by the composer and vocalist Erin Gee – a composition professor at the University of Illinois."

With the Android version just finished, and a major update planned for the Autumn, the brothers have a well-deserved break planned. After that, they plan to start thinking about their next project. Hopefully that, too, springs to life and twists toward success similarly to Blek.