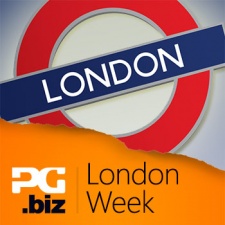 The UK's capital is thriving. For some, that's a blessing – a sign that the British economy is, whatever your politics, recovering.

For others, it's a sign of the continued disjointed nature of doing business in the UK. London has always attracted more investment, created more jobs and been home to more consumers than any other city in the British Isles. It's a gap that's just as prevalent in the modern day games industry, too.

Where once hubs like the North West of England and the Midlands could claim to be on a creative par with London, now the capital and its surrounding area (Oxford and Leamington Spa arguably included) realistically only has Dundee to contend with when it comes to taking the UK's development crown.

Most of the biggest games publishers and developers in the UK call London home. From Shoreditch and Camden, to Soho and Piccadilly, the city's fashionable hotspots are now development hotspots as well.

Perhaps more than any other part of London, Shoreditch has exploded with technology and games business in the last five to ten years. This area of East London has become one of the trendiest spots in the entire city, attracting all sorts of businesses (and an awful lot of hipsters). Such is the variety of technology firms here that the Old Street Roundabout is often referred to locally as "Silicon Roundabout."

Sitting in amongst this cauldron of creativity is Mind Candy, the developer behind the vast success that is Moshi Monsters - a brand of collectable toys that crops up in almost every medium you can think of, from games to comic books to movies and figurines.

Divinia Knowles is the COO at Mind Candy and has been around the company right from the start. We asked her if the transmedia strategy could work for smaller games companies too.

"We have been able to translate the game into many different products and mediums because it is so rich," says Knowles.

"The vast world, over 200 characters and the strong underlying narrative and story that emotionally resonate with our audience. This has worked so well that Moshi has become a phenomenon in the UK. I think this could work for smaller indie games if they too had the right ingredients within their games."

One game that, both critically and commercially, is judged to have fused together 'all the right ingredients' is Thomas Was Alone, developed by Mike Bithell and published by the London-based Curve Studios on Sony's PS Vita.

Rob Clarke, Curve's marketing manager, gave us some insight into the company's motivation for helping indie studios to reach mass audiences, taking their games from PC to iOS and PSVita.

"Thomas Was Alone was a new game that nobody had really played or heard of but it was doing quite well in the indie developer circle," says Clarke.

By the time we released Thomas Was Alone on PlayStation, Mike Bithell had become a bit Internet famous.

"Jason Perkins [Curve's MD] thought the game would work well with PlayStation controls so we got in touch with Mike [Bithell]. We asked Mike early on how many units he had sold and it was only in the hundreds, so we actually wondered whether it would be worth it or not to develop a PlayStation version.

"Thomas actually took off on the PC while we were in development on the PlayStation versions. By the time we released those versions it was much more well known and Mike had become a bit Internet famous.

"Working with a successful indie game and developer meant that people started to come to us to say 'Can you develop our game for PlayStation? We want to be on it but we don't have the time or the resources.' These days some people come to us."

One man who knows about working with developers is Andrew Smith, noted for own development work at Spilt Milk Studios, was also previously as the man behind the user acquisition side of things at AppyNation.

AppyNation pitches itself as a 'unique' publisher, working in the interests of independent developers, helping games to find an audience on complex storefronts like the App Store, without taking any IP for itself.

Its services were once limited to members of its consortium, but AppyNation is more than happy to work with anybody's game today, providing that it's of interest to the tastes of its staff.

"We do the QA, translation, publishing and so on. Basically anything that the developer doesn't want to do because they want to spend all of their time working with their expertise. The same is true for anyone from outside the consortium," Smith tells us.

"We have to be interested in the game though, that's the big thing. We don't make purely commercial choices. We then work with them to make the game as good as it can be and give it a chance in the market. We don't take IP, that's the developer's right. It's old fashioned to take IP from developers.

"We haven't funded any projects either. Adding that monetary side to it would allow us to force certain decisions and we don't want to be in that position when the whole point of us choosing a game is because we like it as it is."

But what is London life for the other side of the publisher-developer relationship? How do indies find working in the capital?

Honeyslug, one of London's most unusual indie studios, is based in Kentish Town near Camden and is responsible for the utterly bizarre PlayStation Vita hit, Frobisher Says, as well as the upcoming Hohokum and several successful mobile and browser titles.

"We're in that world of trying to persuade somebody to give you money when that person has no idea about what you're trying to make," claims Haggett.

"Their job is to give money on the basis of somebody else who knows nothing about video games making a decision about how much money should go to nebulous groups of companies. I would rather do away with the whole thing and spend the money more effectively, for instance by putting more IT into schools."

Come back to PocketGamer.biz each day this week for interviews with some of London's creative powerhouses as we get to grips with games development in the UK's capital.

Andrew Smith no longer works for AppyNation. This interview was conducted before his departure.