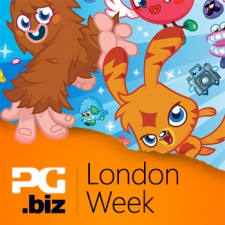 This is the second part of our week long look at the London games development scene.

Mention Shoreditch to any Londoner and chances are the conversation will quickly turn to trendy nightclubs, bearded men, cafés equipped with iPads on every table grinding only the most ethically grown of coffee beans and cropped trousers. Cropped trousers everywhere.

Shoreditch is undoubtedly the UK's hipster capital, and resides in what was for many, up until only a couple of decades ago, one of the capital's no-go districts.

In 2014, however, this corner of East London is home to some of the UK's most innovative web, tech and gaming firms.

One of the most successful is undoubtedly Mind Candy. The company's huge reputation comes from Moshi Monsters, a browser game released back in 2007 that has taken over the minds of children around the world. With over 80 millions users the brand has expanded to the point that you can't escape it even if you tried.

There are toys, magazines, video games, trading cards, confectionary and even a feature film. You simply can't talk about gaming in London without speaking to the minds behind this massive brand, so we caught up with Divinia Knowles, the company's COO.

Knowles tells us that Mind Candy's transmedia strategy is a huge part of the brand's success. It's hard to find all too many shops in the UK that don't boast some form of Moshi Monsters merchandise on their shelves.

"Moshi Monsters' visibility is tied in with its success as a brand – its visibility has been created through brand awareness," says Knowles.

"We have been able to translate the game into many different products and mediums because it is so rich. The vast world, over 200 characters and the strong underlying narrative and story that emotionally resonate with our audience. This has worked so well that Moshi has become a phenomenon in the UK. I think this could work for smaller indie games if they too have the right ingredients within their games."

It's a big ask for an indie developer to reach anything like the level of visibility that Moshi Monsters has achieved, but it's definitely possible on a smaller scale.

Mike Bithell, for instance, achieved great things by getting his game, Thomas Was Alone, to appear on as many platforms as possible. Even if someone hadn't played it for themselves on their own platform of choice, by the time it was released there they probably had read about other versions of the game, or heard about it from a friend.

I think the Moshi Monsters could work for smaller indie games too.

A one-person outfit creating a transmedia brand is probably out of the question, but a multiplatform game isn't impossible.

Building the next big thing

Outside of Moshi Monsters, Mind Candy is beginning to explore new ideas and new brands rather than resting on the laurels of a single successful IP.

Other companies with a similarly successful brand - Rovio with Angry Birds, for instance - often seem to find it difficult to expand with new properties that achieve the same level of impact. So will Mind Candy be making more toys for kids with its next IP, or trying something completely different?

"Our goal is to create family brands with a digital heart," Knowles tells us. "These new IPs will be targeted at families - hopefully Dads, Mums and Grandparents playing alongside children. Going forward the games we create will be mobile or tablet first with rich stories, worlds and characters that we can translate into other media."

As well as producing leading brands, Mind Candy is also one of the leaders in London's games community. The company's office in Shoreditch has been used for all sorts of events, including game jams.

For Mind Candy, this isn't just about giving back to the gaming community, it's also an opportunity for talent spotting. As such, it's possible that those heading down to a Mind Candy sponsored event could come out of it with a new job.

"We love hosting different events in our offices and sharing our lessons learned with others. Mind Candy is a wealth of knowledge and we love sharing this if it will help, however we are always also on the look out for super talented people to come and join us and being a leading light in the community definitely helps us with hiring," says Knowles.

Having a strong gaming community in the UK can only benefit our business, especially when it comes to the Government giving tax breaks.

"Having a strong gaming community in the UK can only benefit our business, especially when it comes to talent attraction outside the UK and encouraging the Government to give tax breaks and other incentives. Gaming is an important sector for the UK economy so the more we can do to help grow the community the better for all of us."

Throughout the gaming scene in London it's clear that many of the more successful small studios have very close relationships with the holders of their chosen platform.

This is especially the case with studios working on PlayStation titles, but also applies to Xbox, Steam and mobile developers too. Knowles and Mind Candy are absolutely convinced that these relationships are the key to success.

"The gaming scene is alive and well in Shoreditch and in London more generally. I think there are some great games that we are seeing pop up in the different app stores, but I still think discovery is the biggest challenge when it comes to games being successful. Relationships with and endorsements from the platform owners are vital when it comes to cracking the discovery problem and finding success," Knowles claims

"It depends what game you are making for what audience as to the platform you use. Some games are absolutely perfect for the audience on Steam for example. I do feel that if you are looking for a broader more casual gaming audience that the app stores are the platforms to use, but your game has to be good and relationships with the platforms are key."

With this in mind, come back to PocketGamer.biz tomorrow for our interview with Curve Studios, a London publisher that specialises in using its close ties with platform holders to help indies like Mike Bithell and Ed Key to find their audience.