And why indies are falling out of love with iOS 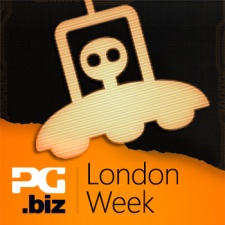 This is the third part of our week long look at the London games development scene.

Not far from Mind Candy's Shoreditch office lies the home of one of what is for many one of London's 'coolest' games publishers.

Curve Studios is a champion of indie games set up to aid beloved titles from small studios to find a place on new platforms, reaching more gamers and finding a more mainstream audience. The list of titles Curve has worked on is extremely impressive, from Thomas Was Alone to Stealth Inc., Ultra, Proteus and more. In particular it specialises in porting PC indie games to PlayStation and mobile platforms.

Originally, however, the firm was founded as a porting house in 2005 and needless to say its first jobs weren't as glamorous as the ones it works on today. The studio ported the Buzz quiz games to PSP and worked on games Sega Mega Drive TV microconsoles that feature tens of titles built directly into the unit.

The first moment that brought Curve to attention was its first self-published indie game, Explodemon, that was released on PS3 in 2007. The next game, Stealth Bastard, garnered more interest.

"We looked at other avenues like PlayStation and we'd already worked with Sony on PSP. This was just when Sony was starting to push indie games quite a bit more," says Rob Clarke, Curve's PR Manager.

"At the same time we were noticing that other indies were looking for help to get onto the consoles. We thought we might be able to help with this both as a publisher and as a developer with the ports. There wasn't a big plan but in the last year we have tried to firm up this strategy and figure out who we can and can't help."

One of Curve's first indie ports was Mike Bithell's Thomas Was Alone, which was carried over to PS3 and PS Vita, However, initial slow sales on PC almost caused Curve to abandon the project.

"Thomas Was Alone was a new game that nobody had really played or heard of but it was doing quite well in the indie developer circle. Jason Perkins [Curve's MD] thought the game would work well with PlayStation controls so we got in touch with Mike," Clarke tells us.

"We asked Mike early on how many units he had sold and it was only in the hundreds, so we actually wondered whether it would be worth it or not to develop a PlayStation version. Thomas actually took off on the PC while we were in development on the PlayStation versions. By the time we released those versions it was much more well known and Mike had become a bit Internet famous"

So with Thomas Was Alone chosen for a port project because of its suitability to PlayStation controls, we asked Clarke what other criteria merge together to make an indie game attractive to Curve's publishing arm.

"We get asked this a lot by developers. There's no real checklist answer for what we would or wouldn't do. We do need to know what programming language a game has been written in so we have an idea of how long it would take to convert for PlayStation," says Clarke.

"A game written in C is great. Lone Survivor was one of our longest port projects because it was written in ActionScript. The type of code used is a big deal. Unity on PlayStation didn't really exist game last year, but the PlayStation 4 is much easier to develop for so that's becoming less of an issue."

No change for change's sake

Of course another factor is simply whether a game will appeal to PS Vita or PS3 gamers.

For example, Proteus, which Curve ported to Sony's machines, might not have worked in a pre-Journey world where console gamers were less interested in what Clarke calls "art games." Fiddly UIs and long menus full of statistics would be a bad fit for Vita too. Crucially, Clarke explains that Curve shies away from porting games to Vita if any significant changes would be required.

"We will adapt some things but the danger is that the feel of the game and the IP is really important to indie developers. We're dealing with a labour of love most of the time," Clarke argues.

Developers don't always understand how big and how complicated the publishing process is on console.

"There is a point where making a game work on PlayStation can require significant changes, for instance changing a physics puzzle for a Vita port because the system can't handle the physics required. It's a tricky conversation to have with indie developers, though we do always try to add new stuff to PlayStation ports."

The other big benefit of having a studio like Curve port your project to PlayStation is that it has developed a deep understanding of the console certification and publishing processes. Small teams will often want to start their next project, rather than than jump through hoops to release their game on Vita or PS3.

"These guys don't have time to code a whole new version of their game. They'd rather work on a whole new game and new IP. Now that Unity on PlayStation is a thing, more people are starting projects with PlayStation in mind. So we're looking at doing just the publishing side in future, rather than porting games as well," says Clarke.

"Developers don't always understand how big and how complicated the publishing process is on console. Most are used to Steam and iOS and going through iterations while growing the audience. With Sony it's one big push and then you're out. You have to go through QA, localisation, age ratings and so on. It really reduces the amount of time you have to spend on the creative elements of game programming."

Curve's publishing work is increasingly moving towards these PlayStation platforms rather than iOS. Clarke believes that the indie scene is fast turning off smartphone platforms because of the mainstream games media's increasingly negative attitude to the platform.

He argues there might even be the possibility of a negative stigma being attached to indies that work on mobile.

"The indie scene in general is having issues with iOS at the moment. A lot of the media coverage is very negative, especially around free-to-play," Clarke claims.

"More recently it's been focused on copyright, trademarking and clone games. If you look at that as a developer and you're not necessarily a mobile gamer yourself then you're going to think that those are the only things that work. It's easy to look at the top grossing games on the App Store and think ‘this isn't for me.'

"Combined with the press coverage it's easy to be turned off. We even hear consumers saying that indie games on iOS look like Flash games.

"We are positive about mobile despite the coverage of free-to-play games like Dungeon Keeper and the state of that market being a bit of a mess. There is room for premium mobile titles. We've found it. There is a market for games that don't gouge in-app purchases. We could have made Stealth Inc. free and have people pay for lives or something but it doesn't work for Curve as a company or for our designers working on the game."

On a more positive note, working in London has been hugely beneficial for Curve. The city has given the firm access to a huge independent development community, filled with a huge variety of games which are perfect port projects for PlayStation and mobile devices.

Of course, setting up in the UK's capital comes with some pretty significant financial risks such is the huge gap in living costs compared with the rest of the country. So is it worth it to take the financial risk to reap the benefits of the capital's gaming scene?

"With what we've seen, I think that making your first game, finding somewhere close to London but not actually in London is probably the best bet because rent is incredibly high here," Clarke advises.

"Cost of living is really high and that's exactly what you don't want, which is why there are a lot of indie developers up north. You can probably do that and socialise at events like Rezzed in Birmingham and have a much cheaper cost of living. There's definitely big advantages to being in the London scene and amongst this network of indie developers, but it isn't worth paying the London rents for that as an indie startup or your first game."

The big advantages Clarke mentions are mostly to do with events and socialising with like-minded gaming folks. London has some fantastic opportunities for small developers, like the Etoo event which started in 2013 as an alternative E3, held in London at the same time as the much larger Los Angeles show. There's even an alternative GDC planned to take place at the South Bank next year.

"There are big events in America, but there's always an indie organisation that's pushing our own stuff in London with the backing of UKIE," concludes Clarke.

"There's a lot more socialising in the London scene because no one has to get a car or a train home thanks to the tube network. That's really underestimated. You can drink and have fun without worrying about a long journey home. London is in a great area too, because there's a great indie scene in closeby in Brighton as well. In other cities there just isn't as much going on around you. You need to seek it out and perhaps travel to find it."

Check back with PocketGamer.biz tomorrow for an interview with another of London's most prominent indie games publishers, AppyNation, which has gone in a different direction from Curve, focusing on mobile rather than console and portables.

Super Arcade Racing dev OutOfTheBit on not compromising on your vision