Going far together: The making of Kiwanuka

The pain of simplicity 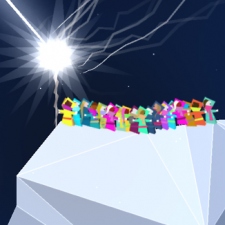 CMA Megacorp's striking, unique, and truly bizarre puzzler, Kiwanuka, is perhaps one of the most intriguing titles the App Store has to offer of late.

The game is an amalgamation of bold visuals, focused gameplay, and psychadelic, but decidedly touching audio, with CMA somehow bringing together concepts that could, and perhaps should, have been jarring, and instead using them to create a title that's profoundly simple.

Appearances, however, can be deceiving, and while Kiwanuka might feel simple, the game's development process was anything but.

During a chat with Andrew Lim, CMA's marketing guru, we learned that Kiwanuka was, in some respects, a child of chaos: a product of passion, hard labour, and freefall development.

"We've all got a fairly collective background in the mobile industry," says Lim, explaing the roles of CMA's small, but tight-knit, 3 man team.

Every game is built around a set of principals, and Kiwanuka is no different. However, before the game had even begun to take shape, Lim and the team knew that whatever they designed would have to take full advantage of the touchscreen, a piece of tech they felt mobile developers were unceremoniously shoving to one side.

"The first thing we said was that we didn't want to make a game that didn't work on touchscreens, because one of our main contentions was that a lot of games on phones aren't really designed for the touchscreen," explains Lim.

"They've either been made with a different platform in mind, and then been ported onto mobile, or they've been made for the touchscreen with the most limited mechanic you can imagine, which is either tapping, or very limited motion."

After decided to make full use of the touchscreen, and nailing down some mechanics, the team still had no idea what game they wanted to make. They had a skeleton, but adding the meat, and finding the right personality, was proving difficult.

"We originally started experimenting with about 10 or so prototypes, and that's kind of our approach. We start with a mechanic, because we strongly believe that it's important for the game to feel fun, but that feel factor, in the very early days, can be a little bit vague," says Lim.

"There's no scientific explanation as to what the feel factor 'is', but part of it is instinctual, how it feels when we're playing it, and part of it is how accessible it is. We need to be able to hand the game to somebody else and watch them pick it up in the space of a few seconds.

"So, we messed around with a lot of ideas, and, actually, the Kiwanuka idea came about through a process of refinement, because in the very early days we had three mechanics in that game, and we realised that we'd actually overcomplicated it.

"Getting those mechanics right is a very delicate balancing act, and we're still working on it now."

The creative nature of game design means that, for better or worse, it's a wholly unpredictable endevour.

Expectations and reality rarely align, and as Kiwanuka began to take shape the team realised they were slowly losing sight of their vision.

"One of the reasons we took so long to make Kiwanuka was because we needed to devote a lot of our time to refinement. We took a hell of a lot out. The game was a lot bigger when we started," reveals Lim.

"We did that because, over time, we realised it was an overcrowded, bad experience. We had to keep it simple.

"I know the idea of simplicity gets touted a lot by a huge amount of companies, but what it means to us, to put it into more specific terms, is that we include a lot of ideas that we think are great, and then we try and find the focus and hone in on the bits that we care about the most."

Killing your darlings is a difficult process, but the team understood that it was a necessary evil if they wanted to remain true to themselves.

"In Kiwanuka we honed in on the idea of bringing lots and lots of tiny people together with a mechanic that we felt worked, and that actually ended up being quite complicated to begin with because it's very unusual having so many characters in a game," adds Lim.

We're not interested in adding layers upon layers in order to squeeze out as much money as possible.

"What we realised is that, as soon as we went down that road, we were building a totally different game to the one we set out to build."

While some might see such an approach as reductive, in reality, it's all about refinement, and Lim isn't ashamed to admit that the CMA are a little bit unconventional.

"We have almost the opposite approach to some developers, because we're not interested in adding layers upon layers in order to squeeze out as much money as possible," says Lim.

"We want to do the opposite. We want to take as much out, and then offer as pure an experience as possible. An experience built around a single mechanic, or a few mechanics, so that when you're playing it, you can focus. I feel like thats underrated at the moment."

Naturally, polishing a game in pursuit of absolute perfection is about as stress free as attempting to turn water into wine, and Lim knows 'crunch time' - much fabled iin certain corners of the industry - is bad for business.

"There's this image of being really stressed out and continuously pushing, but that doesn't actually help. When you're trying to do something well, you need to be relaxed," offers Lim.

"We started meditating, and we started doing Yoga, while our design director became incredibly interested in Psychology. You almost have to get into a zen like state to carry on without making mistakes, because when you panic, you just think 'oh, let's just put IAPs in, because that way we'll get more money.

"You do start wondering if you should conform to what other games are like, because that's less risky. In reality though, that's total rubbish. You need to be able to push that fear out, and we were able to do that thanks to the support we got from our family and friends."

Those who rallied around the trio during their darkest moments are the unsung heroes, explains Lim.

It's easy to support a developer who's on top of the world, but those who stay in the background, offering a helping hand whenever it's needed are, perhaps unwittingly, the people who ensure great games are still being made.

They might not be designers, publishers, or developers, but they're just as important.

"There's an expression, I don't know where it's from, but it explains that 'if you want to go somewhere fast, go there alone, but if you want to go far, go there together', and I definitely think that, with game development, if you're doing it alone, it's a very lonely process," says Lim.

"Because of that I'm blown away by people like Jonathan Blow and Phil Fish. I can appreciate why some people think they're mad, because you have to be a bit mad to do it. It pushes you that way."

"It's been an emotional journey, and I can't put it all into words, but I can say that the three of us are better for it, and it's an experience that I think will stay with us for a long time. It's taught us all something about this mad, mad universe."

You don't need success to be successful: Kiwanuka co-creator Andrew Lim on dealing with the downs of development

Authentic yet distinctive: How Middle-earth: Shadow of War came to mobile

Simplified, faster and more intense: The making of World of Tanks Blitz