Frobisher Says studio on life in the capital 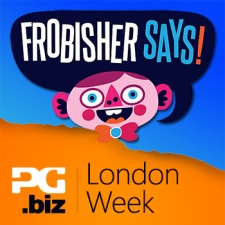 This is the fifth and final part of our week long look at the London games development scene.

Throughout the week we have spoken to all sorts of developers and publishers from London's indie scene, especially those within touching distance of the famous Old Street "Silicon Roundabout."

Games are woven into almost call corners of the UK's capital, however, and across the city in Kentish Town live a small studio producing some of the most imaginative games around.

Honeyslug is the set of madmen behind PlayStation Vita's Warioware inspired fever dream, Frobisher Says, as well as a recent but strong back catalogue of indie games for mobile and browser. For our final interview of London Week, we sat down with Honeyslug CEO, Ricky Haggett to find out why his studio's games are so very odd. First up, why Vita?

"Sony asked us to pitch them a game for the launch, what they called the showcase apps for Vita. We'd just been in the IGF for Hohokum so it was an interesting opportunity for us. A console launch is a big deal and we knew we'd get good press," claims Haggett.

Hohokum is Honeyslug's upcoming game for PlayStation 3, 4 and Vita, but learning Sony's technology with Frobisher Says was crucial for the studio.

"While that was going on, we had the chance in the background to really figure out what we were going to do with Hohokum. Without the pressure of having to figure out a deal for it right off the back of the IGF."

Haggett makes Honeyslug's story so far sound remarkably simple. In fact, the company's experiments with new gaming formats are what brought it to the attention of Sony.

Recent stories about independent studios pitching games to Sony's External Studios staff are very different from Honeyslug's techniques of being amongst the first to appear in a new corner of the games industry, often with a slightly bizarre game or unusual publishing model to make it stand out.

"We'd worked with Sony before Frobisher. We did a game called Cahoots which was one of the first PSP Minis titles. That got a ton of love from the guys at Sony's London studio," Haggett tells us.

"Frobisher Says was a free game on Vita so it has a lovely ongoing life that you can search for it on Twitter and see that people who have just bought a Vita are downloading it and checking it out and saying ‘Oh man! What the fuck is this?' Their minds are blown and that will keep happening because it will always be free on Vita."

It's not just the look of Frobisher Says that was designed to provoke this kind of response from players. Haggett and the rest of the Honeyslug team deliberate tried to make the game as confusing as possible, without teaching you how to play. It's pretty much the opposite of most modern video game design, but it seems to have worked.

"Sony came to us and said ‘do you want to develop and idea for the Vita?' We went to an event and watched lots of videos and presentations and there was a sense of it being a really confusing device with lots of inputs and ways to interact with it. So we decided to make a game that uses all of them in a deliberately confusing way, trying to pull the rug out from under the player's feet."

Back in January we spoke to King's Kim Nordstrom, formally of Sony, who suggested the Japanese giant's recent strategy of courting indies was little more than "survival instinct", pulling PlayStation back from the brink. Does this tally with Haggert's experience of working with Sony?

"It sounds like the guy at King was being a bit cynical. From my experience of knowing these guys well in America and Europe I don't get a sense of cynicism about it," says Haggett.

"It's true that indie games have got a lot of limelight at the moment and Sony wants some of that attention for its platform. Of course it makes sense. But when you actually deal with the people at Sony you're working with people who are really interested in games and championing lots of cool stuff.

"It would be helpful if everyone had a healthy relationship with indies. I would welcome Microsoft, Nintendo and all platform holders to engage with indies and have a process which allows innovative small games to shine. Some are better at promoting stuff and some are worse but it would be good if all platforms were better at it."

If you have a suitable game it doesn't matter where you live in the world.

When it comes to the London games scene, Honeyslug isn't necessarily as well known outside the city as some of the other successful indies that work here. With that said, Haggett is still quite influential in London, particularly when it comes to hosting events for other developers to visit.

We asked him whether it is worth moving to London to make games in the indie scene there, but Haggett took his argument a step further. Is it worth living in London at all?

"It depends on what kind of person you are, what you want out of life and whether it's financially worthwhile. It definitely isn't worth living here to have a relationship with Sony or Microsoft - you can have those relationships from anywhere. If you have a suitable game it doesn't matter where you live in the world within reason," Haggett argues.

"It is very expensive to live in London but there are a lot of people here. I'm one of the people who set up the London indie pub meets about four years ago. When we started it was about ten to twelve people but now we fill the whole pub and spill out onto the pavement. It's massive. Every time I go to London indie meets there are more and more people who I haven't met before that are making their own game, sometimes on the side of another job."

The sheer number of people making games in London is perhaps the biggest reason to locate there, if you can afford it. If you're living elsewhere and developing a project entirely on your own, you might even find that moving to the capital inspires you to expand your work by collaborating with other like-minded gamers. You might even end up starting a company with them.

"The number of people you could collaborate with or even start a company with is the major benefit of being in London. It's incredibly expensive, but if you think you can make it work you probably can, but there will be sacrifices to make along the way," Haggett claims.

"Of course if you're the sort of person who can make a good game on your own without the need for outside influences then you're better off living somewhere else."

Haggett's biggest issue with the London games scene, however, revolves around funding. Government tax breaks for the British video games industry are on the way, but not enough is being done to satisfy some indies like Honeyslug.

"I'm a combination of being cynical about tax breaks and funding and being disinterested in jumping through the hoops. It's just not something that is in my world view," Haggett tells us.

"We're in that world of trying to persuade somebody to give you money when that person has no idea about what you're trying to make and their job is to give money on the basis of somebody else who knows nothing about video games making a decision about how much money should go to nebulous groups of companies.

"I would rather do away with the whole thing and spend the money more effectively, for instance by putting more IT into schools."

Haggett clearly loves working in London, however. We've spoken to people working at companies of all shapes and sizes this week, but one thing is echoed by all of them: things are possible in London that just don't happen elsewhere in the UK.

"In London, the more companies there are here doing interesting stuff, the better it is for all of them. There is a rich healthy scene here. For instance, a journalist can come to Wild Rumpus, see a whole load of interesting games and interview the people behind them. That wouldn't be possible in some other places in the world."