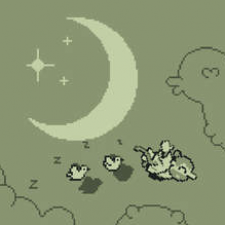 If there’s one truth in the mobile industry it's that free-to-play games will steal the spotlight.

But we also love paid games, so under the label of Pay-to-Play, we're going to be regularly putting a premium game under the microscope in an attempt to seperate the best from the rest.

Nitrome’s retro-inspired mobile title, 8bit Doves, is this week's premium prodigy, and it's a game that I really, really wanted to enjoy.

As an idea, it had ticked all the right boxes before I'd even pressed play, and usually I’m a sucker for any game that’s willing to take me back to the days when Nintendo’s GameBoy was the king of portable gaming.

Despite willingness on my part though, I just couldn’t find that spark.

8bit Doves’ story - which puts you in the shoes of a man trapped in a VR world, where escape can only be achieved by collecting subconsciously spawned Doves as you soar through dreams - feels like a pretentious overlay, tacked on in a vein attempt to lend some small modicum of weight to actions that constantly struggle to entertain.

See, repetition is the name of the game in 8bit Doves, and though you’ll travel through three different level packs, Sweet Dreams, Deep Sleep, and Nightmare, each with their own unique theme, in reality, you’ll hardly notice the difference.

8bit Doves feels like a game that lost a bit of its soul during development.

Levels get progressively harder, and more complex, but, beyond the addition of saws and moving obstacles, lack innovation. They just feel stale. I also couldn't shake the feeling that the game was only so difficult because of some dodgy control and movement mechanics.

To fly through levels you’l have to tap on either side of the screen to rotate clockwise and anti-clockwise. It’s an unforgiving system that rarely feels natural, and at times, feels like it’s actively working against you.

Sure, you could argue that it's all part of the 'challenge', but it's in the most challenging games where you need those mechanics to be on your side.

It's a shame, because there were brief moments during play when everything would slot into place, giving me a glimpse of what the Nitrome team had clearly tried to achieve. My movements were fluid, and my character effortlessly drifted through dangerous levels like a spectral leaf on the wind.

Unfortunately though, those moments of serenity were few and far between, and only served to highlight what could have been.

Ultimately, 8bit Doves feels like a game that lost a bit of its soul during development. As a concept, it’s sound, but somewhere along the line one or two pieces of the puzzle went missing.

As a result, it's an experience that always feels like a glass-half-empty sort of affair.

Pay-to-Play? So close, yet so far. Your $2.99 could be dropped on more interesting titles. Give this one a miss.