Pay-to-play: Why Fotonica's digital paradise is worth every cent of your $3 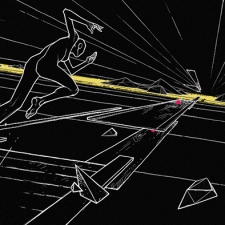 If there’s one truth in the mobile industry it's that free-to-play games will steal the spotlight.

But we also love paid games, so under the label of Pay-to-Play, we're regularly putting a premium game under the microscope in an attempt to separate the best from the rest.

The App Store is full of endless runners. They really are dime-a-dozen, and, more often than not, some of the most addictive ones can be downloaded for free - I'm staring into your beautiful golden eyes, Temple Run.

Why, then, should you hand over your hard-earned cash to buy one when there are plenty available for absolutely nothing?

The answer comes in the form of Fotonica: an endless runner that deserves every cent of the $2.99 it costs to download.

Developer Santa Ragione's unique effort, which is probably best described as what would happen if Tron and Mirror's Edge made digital-love, is a true feast for the senses.

On its own, the game's pulsating, synthetic visual style would probably have been enough of a draw for the majority of mobile gamers.

When combined with Michael Manning and Nicolo Sala's haunting techno score, however, it creates an experience that, I promise you, is unlike anything you've ever played before.

Naturally, style without substance is worthless, so it's a good thing that Fotonica has both in abundance, with the game's tight, breakneck gameplay making for an experience that's as thrilling as it is beautiful.

Controls are simple, responsive, and work flawlessly on the touchscreen, meaning that, if you do plummet into Fotonica's otherworldly abyss, you'll only be able to point the finger of blame at yourself.

Remember: timing is everything.

Validating the developer's decision to go premium is the fact that Fotonica has a bevy of gameplay modes for frothing players to sink their teeth into.

Serving up the quintessential endless mode, which in itself spans three unique levels, Fotonica also offers seven mission levels for players to explore and perfect, a competitive two-player split-screen mode, and, if you're into that whole self-flagellation thing, the game also allows you to up the difficulty at a moment's notice.

Ultimately, if endless runners aren't your thing, then Fotonica isn't for you.

If, however, if the thrill of the eternal chase never fails to leave you foaming at the mouth, then stop reading this article and start downloading Fotonica right now from the App Store.

Pay-to-play? Fotonica doesn't deviate from the tried and tested endless runner formula, instead opting to refine it by serving up a slick, addictive, and visually striking title that offers players plenty of bang for their buck.

You can read our previous Pay-to-Play articles here.

Ubisoft Milan: We want to be the new Rare

Pay-to-Play: Why space-age thrill ride ALONE is a steal at $1.99