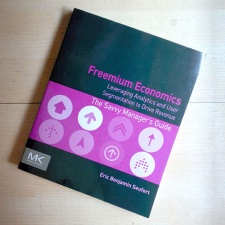 Given the scale of the free-to-play mobile games market, it's perhaps surprising there haven't been more in-depth books published on the subject.

In part this demonstrates just how quickly the market has exploded, while also underlining that the sort of people who could write such a book are keeping their secret sauce secret while working as monetisation experts in those companies making tens and hundreds of thousands - perhaps even millions - of dollars a day from their F2P games.

In this regard, Eric Benjamin Seufert is the exception.

With Freemium Economics: The Savvy Manager’s Guide, the head of marketing at Facebook and mobile F2P publisher Wooga - best known for games like Jelly Splash and Diamond Dash - has come up with a methodical approach to understanding how to make the free-to-play ecosystem work for your games.

That said, this is not an easy read.

Unlike some of the other books we've covered on The Reading List, Freemium Economics isn't the sort of book you sit down and read through cover to cover as you sip your morning coffee.

Instead, it's written from an analytical perspective, and in tone could be described as abstract or even academic. Rather dry and rigorous, it's quite literally by-the-numbers.

Although there aren't case studies on games and little contextualisation of what's currently happening in the industry - perhaps for fear of dating the content - there are plenty of equations, graphs, spreadsheet details and statistical workings so readers can start to see how the numbers stack up.

Think before you think

Starting with rule-of-thumb that F2P games generate revenue from 5 percent of their players, Seufert argues that you need to focus on your analytics identify your game's '5 percent'.

Hence, analytics provide the scientific framework you need to understand in order to generate and optimise your revenue.

This doesn't mean, however, that the remaining 95 percent of your non-payer players are worthless.

Although on one hand, they can be viewed as cost of doing business, they also provide indirect value and enhancing your ability to extract revenue from paying users.

And more positively, as Seufert points out in an excellent section on LifeTime Value, even a user with LTV of $0 is still more valuable than buying a random user because you understand their data.

Indeed, because your paying audience can be viewed as an anomaly within your playerbase, you need a large sample if you're going to work out crucial things such as how and when certain players are converting into payers.

Show me the data

It's taking this systematic approach to your audience that's one of the book's key messages.

Too many developers focus on monetisation, when they should be focusing on retention, because ultimately it's retention that drives a game's monetisation.

Ultimately it's retention that drives a game's monetisation.

Other good pieces of advice include the crucial value of optimising your tutorial as this is the one part of the game everyone experiences, while Seufert isn't a fan of spending big within other company's games to try and acquire new users.

As he sagely comments, the only reason that a developer is willing to 'monetise' that user by showing them an advert for your game is because they know that player hasn't and is unlikely to ever convert into a payer. It's this 'information asymmetry' that means too many marketing dollars are being wasted moving non-paying players between games.

And yet the comment to trump all other in the book returns to that by-the-numbers description.

Freemium Economics: The Savvy Manager’s Guide is available from Amazon US, priced from $41.67, and Amazon UK, priced from £27.89.

14 videos that teach you how to monetise, retain and acquire users for your mobile games