Walking tall: Set Snail on embracing the experimental side of game development 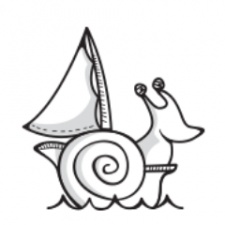 Danish developer Set Snail has found itself the object of industry affections recently thanks to its wonderfully minimalist titles Pack a Puzzle and Daddy Long Legs, the latter of which has now been downloaded over 3 million times.

Despite the studio's undeniable success, Set Snail's three person team are determined to keep their feet on the ground, with co-founder Morten Claussen explaining that the trio isn't motivated by success or cash, but simply the desire to keep having fun.

Intrigued by the firm's honest approach to game development, we caught up with Claussen and fellow co-founder Kasper Bøttcher to dive into Set Snail's past, present, and future.

"We are three guys who've known each other since tenth grade, which is a long time. Almost 15 years," begins Claussen.

"We've always been interested in gaming and loved playing games, and we always had this dream that one day we could get together and start our own thing, and make the games we want to play, instead of just playing them.

We spent a great deal of time on Pack a Puzzle, some would say too much time, but it was our only child and we struggled to let go.

"As long as we're having fun, that's all that matters. We started this company because we didn't want to work for anyone else. We just want to have fun with the things that we do, so that's really the main goal of Set Snail, and if we can make a living out of it, that's even better."

Even though some of you might not know who Set Snail are, I'd be willing to bet that the majority of you have heard of, and likely even played, Daddy Long Legs.

The story, however, doesn't quite start there, and even Set Snail's first attempt at game development, social puzzler Pack a Puzzle, wasn't as successful as its second, it did point the team in the right direction.

"Pack a Puzzle was our first game, and we started the company when we started developing that game," says Bøttcher.

"At the very start we got together and we really wanted to nail down that first idea which would spark it all off. That was the idea we came up with, and we spent roughly a year developing it - including updates.

"It's hard coming up with the right idea. You know it's just a matter of time, but it's difficult to just keep emptying your brain. That's definitely one of the hardest things."

One of the biggest lesson's Pack a Puzzle taught the team was how to let go and move on from a project. However, it also reinforced the creative importance of organising regular jaunts to the pub. Seriously.

"We spent a great deal of time on Pack a Puzzle, some would say too much time, but it was our only child and we struggled to let go. It was really hard," adds Claussen.

"Still, we got a lot of a good things out of it. We didn't earn the big bucks, but we got a lot of awards for our work, so it was worth it just for that recognition and the lessons we learned.

We maintain the belief that if our games are good enough discovery won't be a problem.

"A beer at the bar always helps. We do that quite often. Every two weeks we get together and have a beer on a weird Wednesday evening. We take our notepads with us and then we prototype a lot of those ideas.

"If, after three days worth of development, that idea has turned into something that's fun to play, we'll give it another week. If it's still looking promising at the end of that week, then we usually decide to go all in."

After finding the right idea, the team had to decide which platform to release on.

Thanks to the marvellous power of hindsight, we know they ultimately wound up choosing mobile: a decision prompted by the platform's open nature.

"Most of the time we try out some ideas, and then we decide what we're going to make it for. I still think there are a lot of things that haven't been done on tablet yet. It's a more open world, and it's also easier to get your games out on mobile platforms," explains Claussen.

"Of course, it's definitely harder to get them discovered on mobile. It's a huge mess out there. We put that thought to the back of our minds, and we maintain the belief that if our games are good enough, then it shouldn't really be a problem."

Another factor in the team's decision to head towards mobile devices is that it's a market that refuses to stop growing. That in itself makes the platform a mouth watering prospect for developers looking to get their games into the hands of as many people as humanly possible.

In a bid to access that vast userbase, Set Snail opted to release their titles for free, using in-game ads to bring home the bacon. A smart decision at the time, perhaps, but one that the team has come to regret.

"I think we took that route because we wanted the game to get out to as many people as possible. That decision is always difficult," says Bøttcher.

"In a perfect world we would've just put it out at $1, because that's also the way we'd get the most out of it."

"Yeah, a free game gets downloaded more than a paid one, first of all, and we didn't really know how far Daddy Long Legs would go," adds Claussen.

I wouldn't say we're feeling huge amounts of pressure, but it's definitely a bit frightening.

"We had no idea how many downloads it would get or anything, so we just thought well add a banner and hope for some food. Thinking back, we might have done it a different way. We would have definitely considered freemium. We'll live and learn though."

Thanks to the success of Daddy Long Legs, and the studio's refreshingly down-to-earth approach to development, it wouldn't exactly be madness to suggest that Set Snail has an extremely bright future.

Claussen and Bøttcher, however, refuse to get ahead of themselves, and it's very much as case of 'business as usual' over in Denmark.

"We have definitely got some ideas, but nothing that we're satisfied with yet. We prototype new ideas all the time though, and we're confident that something will click into place," concludes Bøttcher.

"I wouldn't say we're feeling huge amounts of pressure because of the success of Daddy Long Legs, but It's definitely a bit frightening because people will judge our next game faster.

"That's part of the fun though, and, honestly, we're all really excited about the future of Set Snail."

You can see what Set Snail gets up to next via its website.