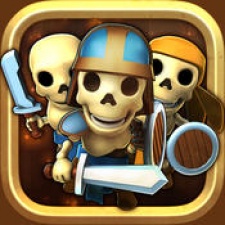 Storm Casters Ultra is a game that's gone through plenty of iterations.

Beginning life at a game jam in Get Set Games' hometown of Toronto, the team's 3-day effort - entitled Seven Jamurai - was a co-op focused bullet-hell affair, and almost unrecognisable from the game it went on to become.

However, despite the significant shift, Get Set Games is explicit about the fact that the seed of Storm Casters existed in its rawest form within Seven Jamurai, captivating the team and demanding further attention.

Make no mistake, this was phase one of Storm Casters Ultra.

“We loved making that game and something about it struck a chord with our team, so we kept that concept on the backburner while we worked on our Mega games,” says Get Set's Creative Director Nick Coombe.

“We knew we wanted to do something with Jamurai,” he goes on. “It was an itch we needed to scratch, and we relished the chance to create a new world and play with a completely fresh set of mechanics for a new audience.”

This new audience was key, as Get Set Games began to shift its focus towards the mobile market in which it had excelled with its aforementioned Mega series - most significantly Mega Jump and Mega Run.

After finishing work on Monsters Inc. Run for Disney, the team began work on Storm Casters in 2013 - interrupted only by work to push Mega Jump 2 for a holiday release, after which the whole team fully directed its attention on the project.

While the dungeon setting remained, the twin-stick shooting was simplified for touchscreen and a nifty collectible card-based system for dungeon variants was introduced.

It all worked well, but adapting the gameplay wasn't the most difficult challenge that Get Set faced. Instead, the more pressing dilemma was monetisation-related.

“Storm Casters was actually originally envisioned as a free-to-play game, which has been our bread and butter since IAP was first introduced on the App Store,” Coombe reveals.

We hoped ... we’d see a strong reception for the game as a pure, paid game experience. It turns out that wasn’t the case.

“So some of the structure was in place - purchasing gems to buy card packs etc. - but halfway through development we pivoted to paid when we saw an opportunity there, and so a lot of features were dropped.”

“[These included] daily rewards, a fourth purchasable card slot, [and] the whole advertising system, which freed us up to complete the game in time for launch in the summer of 2014.”

Thus begins phase two of the saga, with the launch of Storm Casters as a paid app. But why, after having designed the game around F2P, did the team switch to paid?

It seems, like many in the industry, Get Set Games had become not only intimidated by an impenetrable free-to-play market, but also taken with prophecies of premium revival that never came to pass.

“There were a number of factors that pushed us to paid at that time, and we hoped it would work in our favour,” recalls Coombe.

“At the time there was a lot of talk about the squeeze happening in the free-to-play market, with the top games just dominating everything - which still holds true - and players continually stating a preference for good old-fashioned paid games.”

“We hoped that shift was a real trend and that we’d see a strong reception for the game as a straight-up, pure, paid game experience. It turns out that wasn’t the case.”

This misplaced faith in premium is a mistake that's been made by a number of developers, but it's far rarer to see a game actively transition from F2P to paid during the course of development.

Ultimately, it's a decision that Coombe appears to reflect upon with some regret.

“Storm Casters didn’t do as well as we’d hoped as a paid game, but we were (and are) immensely proud of the reception the game received critically and from players,” he says.

“We received more praise and comments about Storm Casters... than any game we had made before that, and we were glad to get that validation.”

We weren’t able to get it in front of enough people to generate the momentum we needed.

However, this was not enough to help the game gain traction. Coombe reflects on the fact that the paid model has a diminishing effect on organic growth via word of mouth - an area in which the firm had previously excelled.

“We weren’t able to get it in front of enough people to generate the momentum we needed, and the paid market is one we had little experience in at the time, so we were limited in what we could do to generate noise for the game,” he admits.

“Ultimately, even though we had a great game on our hands, the barrier to entry was too high.”

And so, as we enter the third phase, the full 360 was completed: from F2P to paid, and then back to F2P again.

As struggles with premium continued, Get Set Games resolved that its first instinct was the truest after all, returning to free-to-play with Storm Casters Ultra.

However, not content to simply restore the free-to-play systems it'd already toyed with, the studio wanted to add more content to gear up for a full-on relaunch with a lifespan more befitting of a F2P experience.

“The prestige system (new game+), which allows players to play through the game multiple times with harder difficulty levels, doesn’t just increase the health of enemies, it also changes a number of other aspects of the game, including the type of enemies spawned,” explains Coombe.

Our overarching philosophy was to take the 'reward' approach to free-to-play.

However, given Storm Casters' F2P origins, the bulk of the existing experience was already well-suited to the new approach.

“We knew there was a great free-to-play game in there - card collection is inherently well suited to offering content that players actually want to buy - and we knew that the game was good enough to generate great word of mouth as a free title,” Coombe says.

The most fundamental issue was in the method of implementation, he notes, as Storm Casters “wouldn’t have benefited well from [many F2P systems] as late additions to the game.”

“Our overarching philosophy was to take the 'reward' approach to free-to-play... we wanted to create features and content that players would be happy to spend money on - games like Hearthstone use this philosophy and are hugely successful.”

Thus far, the game's monetisation - which was approved for its generosity by our IAP Inspector - has seemingly done nothing to put players off. Far from it, in fact, with incentivised ads proving particularly popular.

“When players are actively recommending that other players click on the ads in the game, because they feel they are getting something worthwhile out of it, then we know we’ve done something right,” Coombe comments.

“The same applies to the unique cards we created, or the fourth card slot - people feel happy to buy them because they add something special to the game, but in a way that isn’t pay-to-play or pay-to-win.”

With more content and a seemingly contented player-base, Storm Casters Ultra appears to be an upgrade from the paid version.

However, positive feedback is one area in which Get Set Games has rarely been lacking. The motivation behind Ultra was primarily to drive revenue - so has it been successful to this end?

Speaking specifically about the game's advertising, Coombe reports that Get Set is “earning significantly more per player than we did with the advertising methods we were using in our Mega Games.”

The Mega series being Get Set's flagship and perhaps best-known titles, this is by no mean feat.

Again, Coombe notes the significance of the fact that “players actually enjoy this advertising method and are actively talking about it as a good thing - players are tweeting in a positive way about engaging with our ads! - so we’re very happy with it."

Unsurprisingly, this leads to him espousing the benefits of incentivised ads and recommending them to other developers: “Everybody wins! [...] It’s something we’ll be doing more of in future for sure.”

If you’re aiming at the paid market, think long and hard about ... you’ll be able to generate enough interest to be successful.

However, there are more lessons to be learned from the development of Storm Casters and Ultra.

The first is to gain as much pre-launch insight as you can, says Coombe. The paid version of Storm Casters served as a decent barometer for how people would respond to the Ultra release, but obviously this is neither an ideal nor a widespread situation.

“So always, always do a soft launch in a couple of countries before your global launch,” he says. “Figure out what people like or don’t like. Get a feel for how things might go at the global launch and adjust accordingly.”

Coombe's other key tip is that the death of premium has not been greatly exaggerated - it is very much a real phenomenon, and developers looking to enter that market should be wary.

“If you’re aiming at the paid market, think long and hard about marketing and whether you’ll be able to generate enough interest to be successful. Organic uptake for your game is much, much harder when are charging for your game,” he advises.

“Be prepared!” is his briefest point of advice, but one that neatly distils all of the above. It seems that Ultra embodies the planning and preparedness that the original release lacked, which is now paying dividends in terms of sustainability.

“It was a long road to get here and we’re grateful for the help and interest we received along the way. We’re very happy to see Storm Casters Ultra reach a wide audience finally, and get such a wonderful response from our players.”