Working in tandem: the making of Dawn of Steel

How Superweapon and flaregames shook up mobile strategy 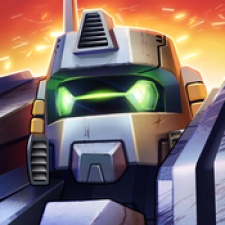 When you play Dawn of Steel for the first time, there are two main areas in which it stands out.

The first is its theme, eschewing the archetypal fantasy stylings of Clash of Clans, Game of War and the like in favour of the massive, clanking, mecha behemoths more often associated with Saturday morning cartoons.

For a group of triple-A escapees like Superweapon, imprinting its own unique style was an important starting point in establishing a studio with its own identity.

And having all grown up with 1980s series' such as Robotech, Gundam, and Transformers, connecting the dots didn't require any great leap.

“The desire to work on a game with that theme is due to the fact that we never really had a chance to work on such a game as a team prior to Dawn of Steel,” says Amer Ajami, President of Superweapon.

“Most of us met at EA, where we worked on the Lord of the Rings and Command & Conquer, but nothing really focused on themes such as mecha, or space exploration, or anything like that.”

“So, when we were brainstorming ideas and themes for our first game, it was pretty easy to settle on a sci-fi setting where players were battling each other with giant mechs.”

But while it's the striking character design that first draws the eye, Dawn of Steel's most significant divergence from the mobile strategy norm is its hands-on approach to combat.

The player commands a maximum of three units at a time, and is offered a far greater level of direct control over each than in genre competitors. Again, it's an example of a relatively small tweak that feels massive in the context of a relatively staid mobile strategy landscape.

We wanted to give the player tactical choice and the ability to have a direct impact on the outcome of battle.

“Having worked on a bunch of strategy games ourselves, we saw a couple of glaring holes in the mobile strategy genre that we felt we could take advantage of to help us stand out from the crowd,” reflects Ajami.

“We wanted the player to do more than just throw some units down onto the battlefield and then watch them attack their predetermined targets all by themselves. We wanted to give the player tactical choice and the ability to have a direct impact on the outcome of battle.”

However, with this as a stated aim, there was a danger that Superweapon would slip back into old ways of PC and console development, losing sight of the broader and more casual mobile audience.

Ajami recalls “walking a fine line” between overwhelming the player and providing no meaningful difference to pre-existing mobile strategy titles, “prototyp[ing] a couple of different control schemes and behaviours before we ended up with the combat that was eventually included.”

And indeed, this wasn't the only example of Superweapon struggling to adapt to its new size. With only seven working at the studio - “two engineers, three artists, a game designer, and me,” Ajami confims - knowing its limits became the biggest struggle.

Things got off and running quickly at Superweapon, which Ajami attributes to a combination of the Unity 4 game engine and the fact that the team had worked together previously, developing “nearly a dozen games together.”

However, it quickly became evident that experience and teamwork isn't always an adequate replacement for sheer manpower, and that a seven-person studio has to know its limits.

We lacked some of that discipline early on - our eyes were bigger than our stomachs.

“Coming from massive 50+ person teams from Zynga, Relic, and EA, we were all used to taking on a broad range of features and developing a lot of work in parallel. That just wasn’t possible with a team of our size,” he says.

Overambition and misplaced focus dogged the development, resulting in some features being cut along the way. “It felt like we wasted a lot of time trying to stuff a square peg into a round hole,” comments Ajami.

“We lacked some of that discipline early on - our eyes were bigger than our stomachs, so to speak - which meant we struggled with the overall quality of the game as we attempted to take on too much work by ourselves.”

However, one area in which Superweapon was acutely aware of its own limits was in publishing, recognising early on the need to partner with a more specialised company.

“Making a game of this magnitude is a ton of work. We’ve all had plenty of experience developing games in this genre before, but this was our first foray into the mobile market as an independent studio,” Ajami says.

“User acquisition and marketing are gnarly beasts and can be very expensive, especially in the mobile market, and we wanted to partner with a publisher that knew what it was doing and could augment our development strengths with their own marketing ability.”

Not only did Karlsruhe, Germany-based publisher flaregames tick all these boxes, but its status as a developer in its own right - with several games developed in-house - was what truly set it apart from Ajami and the Superweapon team.

“They understood the mindset of a developer - what kind of tools we need, what realistic milestone commitments look like, etc. - and we felt most at ease with them than with many of the other companies we were talking to,” he says.

Luckily, flaregames was just as enthusiastic about Dawn of Steel.

“We found the game through Pete Larsen, a former EA employee then at flaregames,” reveals Benjamin Ying, Senior Product Manager at flaregames. “He knew Amer [Ajami] and made the introduction.”

The power of nostalgia that inspired the game's design was also at effective at grabbing Ying's attention, it seems: “what attracted me to the game was first the strong visuals. It reminded me of all the robot and mech shows I grew up with and love,” he says.

Flaregames' positivity went deeper than the superficial, too, with the firm also impressed by Dawn of Steel's gameplay.

“[Superweapon's strategy] experience has allowed them to distil the core of what we believe an effective RTS is - moment to moment gameplay, meaningful decision making that affects the outcome of battle, quick reaction times to a changing battle,” enthuses Ying.

This mutual respect was ultimately what made for a good developer-publisher relationship, as flaregames' allowed Superweapon a great degree of creative control without unwanted interference.

I think both teams have worked really hard to stay true to the original vision.

“The game was signed in summer 2014,” Ying says. “It was still in preproduction, and the core gameplay hasn’t changed... I think both teams have worked really hard to stay true to the original vision of the game that was set two years ago.”

Ajami agrees: “I had heard horror stories about dealing with demanding publishers from friends of ours who are also developers before we partnered with anyone, and I was preparing us for the worst, but the relationship has been nothing short of wonderful so far.”

“They never once tried to alter the combat design that makes up the heart of the game,” he goes on.

“They recognized that it was combat that set Dawn of Steel apart from the competition, and they were only too happy to leave that untouched.”

It was principally in monetisation that flaregames' input was required, with Ying reporting that his firm's main role was to “help the team fine tune the progression system and economic balancing of the game.”

“It’s a really fine line between making tons of money and preventing a game from being a pay-to-win game, and both teams actively think about that aspect when designing a feature,” he goes on.

“For example, when coming up with new component upgrades, the best ones aren’t the ones you can purchase with [hard currency]. The best components are actually the ones that you have to play battles to accumulate.”

Overall, Ajami concludes that he would be “hard-pressed to find ways of improving the relationship” between Superweapon and flaregames on Dawn of Steel.

And it's by no means over. Not only has the game yet to launch on Google Play - something Ying assures us will be happening “soon” - but there are also some rather hefty updates still in the works.

“Don’t tell the guys at flare, but we’re planning on going to a tropical island and sip mai tais for a few weeks,” quips Ajami.

He promptly comes crashing back to earth: “Unfortunately, that’s not true. We have a pretty long roadmap of new features that we’re actively working on, including the introduction of something we’re calling Alliances.”

“This is actually a collection of features that include leaderboards, chat, groups of friends, and eventually, events on the game world that players can team up and compete for."

"Maybe we’ll get to those mai tais once we get through all of that.”

NetEase to publish Dawn of Steel in China