How Downtown Showdown embodies the best and worst of genre hybridisation

A lesson in extremes from COLOPL NI's city builder 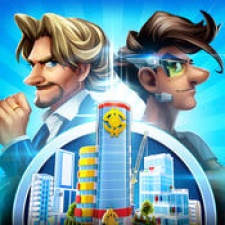 When I first heard about COLOPL NI's Downtown Showdown, I wasn't exactly filled with a burning desire to play it.

I'd really enjoyed the firm's previous release, Colopl Rune Story - a localised version of Japanese mega-hit White Cat Project - and had been looking forward to the studio's next game with intrigue.

However, a lifelong disinterest in city builders meant that I was seriously considering giving this one a miss.

I mean, could anything be more mundane than a game - the ultimate medium for escapism, remember, and one in which anything is possible - where you lay down pretend roads and ensure pretend citizens have access to a pretend supermarket?

Sure, COLOPL NI CEO Shohei Yoshioka had talked up his company's plans to fuse genres and gameplay styles together, but initial impressions failed to inspire confidence that this would be done elegantly.

Indeed, App Store screenshots appear to show an army of rocket-launcher-wielding militia - backed up by a pink Godzilla - decimating a city in a Clash of Clans-esque assault.

An amusingly incongruous image, sure, but one question immediately springs to mind: why does a city builder, of all things, need to crib the battle mechanics of Supercell et al.?

Why does a city builder need to crib the battle mechanics of Supercell et al.?

It recalls that post-Call of Duty 4 period in console gaming when utterly unsuitable titles - from BioShock 2 to Spec Ops: The Line - all came with tacked-on deathmatch multiplayer for fear of being deemed immediately irrelevant without it.

Is including an unnecessary version of Clash of Clans' base assault the modern mobile equivalent? Possibly. Is COLOPL NI guilty of this in Downtown Showdown? Yes and no.

First off, despite starting out as a sneering cynic, I quickly found that the city building at the core of Downtown Showdown was in itself rather entertaining. I really enjoyed slotting buildings efficiently into place and getting a little population boost for my troubles.

Secondly, despite being slapped front-and-centre for obvious reasons, the pictured Rivals mode is actually an utterly throwaway addition that forms a tiny percentage of the whole experience.

Invading another player's city takes no longer than one minute, requires little-to-no strategy or planning, and exists as little more than a periodic chore to top up on resources.

Forget Rivals, then; Showdown is the mode that's truly worthy of praise, achieving its goal of hybridising city builder with competitive, PvP real-time strategy without coming off as tryhard or unnecessary.

The real battles in Downtown Showdown are fought not with giant pink reptiles, but with bricks and mortar - and time.

The real battles in Downtown Showdown are fought not with giant pink reptiles, but with bricks and mortar - and time.

Yet somehow, they remain more competitive and entertaining than any of the more bombastic, explosive conflicts I've yet to experience in a free-to-play game.

To build or destroy?

Taking the same principles of the main game - that all buildings must be connected via roads to water and electricity supplies, while parks and the like boost population - Showdown mode gives two players a plot of land, five minutes, and a selection of buildings to build the best micro-city they can muster.

Its genius is twofold. Firstly, the five-minute time limit - with new buildings made available every 60 seconds - is simultaneously bite-sized enough to work on mobile and sufficient to accommodate dramatic comebacks, turnarounds, and on-the-fly changes in tactics.

Secondly, there is more than one way to score points. With matches assessed on population, area covered, flags purchased and gold accumulated, each player will quickly develop their own approach.

If you're a goody two-shoes, you'll likely stick to honest-to-goodness expansion. However, those with a more malevolent bent can send a team of hired goons to demolish your opponent's precious creations, or plunge their city into darkness at the last moment by buying out the power supply.

That's what defines a good multiplayer game: the capacity for distinct, yet equally viable tactics and styles of play.

Even more impressive is that such a polished and well-balanced mode should emerge from what is, at its foundation, a city builder - not exactly a genre you'd associate with lightning-fast PvP, especially not on mobile.

In that regard, it's an impressive statement of intent from COLOPL NI: genre hybridisation can work, and a company that makes that a cornerstone of its philosophy can yield great results.

But while this is the argument for hybridisation, the cautious counterpoint - that both genres end up inevitably diluted - is also given credence by Rivals mode being lazily evocative of Clash of Clans.

The Showdown mode is everything a successful example of genre hybridisation can be.

What we have, then, is one game that shows both sides of the coin. And while it may be unfair to dwell on Rivals, with it having been established as a largely insignificant addition, that's also kind of the point.

Showdown is everything a successful example of genre hybridisation can be: a mode that combines ordinarily distinct gameplay styles with results that feel exciting, congruous, and genuinely new.

Rivals, on the other hand, is just a mechanic from an existing game that's been loosely recreated and hastily thrown into a game of another genre.

It doesn't take a game design maestro to work out which is better, does it?

So, I implore any F2P mobile developers with an interest in hybridisation to learn from Rivals and aspire to Showdown.

Downtown Showdown is available on the App Store and Google Play.